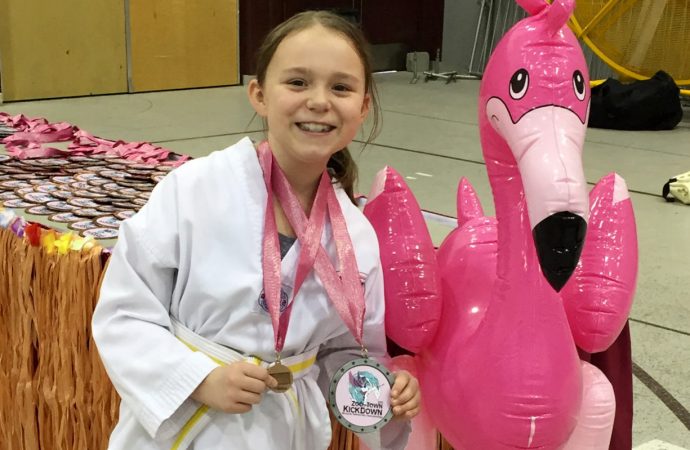 Audrey Moore of the Rocky Mountain Martial Arts Academy shows off her medals from the Zootown Kickdown Saturday in Missoula. (Courtesy photo)

The theme for this year’s tournament was the fighting flamingo. Ms. Sara Lightner of Rocky Mountain Martial Arts took three first-time competitors to the tournament. All of the students participated in the Poomse (memorized form) Competition and Gyroogi (sparring) Competitions in their Divisions.

First to compete for the day was Audrey Moore, an 8-year-old, 9th gup white belt with yellow stripe. She focused well and did great on her Poomse, earning a fourth place. In Gyroogi, she was down at the end of the first round. She came back to end the second round in a tie, and fought hard to get the first score in over-time, winning that match earning a silver medal in her division for Gyroogi.

Marcus Shutey, a 10-year-old, 6th gup green belt, was the next to compete. He kept an intent focus while performing his Poomse and finished his division with a fourth place medal. He also took a fourth place finish in Gyroogi after two hard fought matches. He exemplified the Taekwondo spirit of good sportsmanship and indomitable spirit. He dug deep for each match and gave all he had. 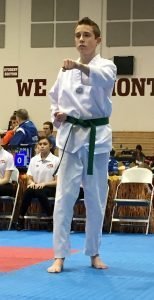 Camren Stalker is shown in this courtesy photo. 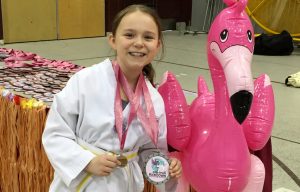 Audrey Moore of the Rocky Mountain Martial Arts Academy shows off her medals from the Zootown Kickdown Feb. 3 in Missoula. (Courtesy photo) 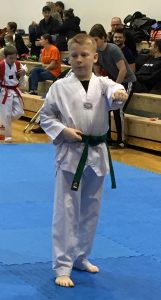 Marcus Shutey is shown in this courtesy photo.

Camren Stalker, a 15-year-old, 6th gup green belt, was the final RMMA competitor of the day. He executed his Poomse with precision and power, earning a first place finish. During Gyroogi, he had two hard matches to fight through, receiving and giving many solid, powerful kicks and punches. In each match, he was 20 points ahead of his opponent at the end of the second round, which ended the matches with a victory for him without going into the final round. He finished the day with two gold medals.

Each competitor took home more than medals. They also took  some lessons learned, not just about focus or techniques, but about themselves. They learned how to handle the stress of new situations and the emotions that come with those stressful situations, staying cool and calm in the heat of competition.

They learned the importance of flexibility, not just of muscle flexibility but also mental flexibility. They practiced the art of having fun while working hard. And most importantly, regardless of the medals they took home, they saw themselves as the winners they are for even taking the risk to compete. They put themselves out there to try something new, to risk doing what was unknown to them, and they conquered their own thoughts and fears, with the result of a fun filled day and aspirations for more competitions to come.