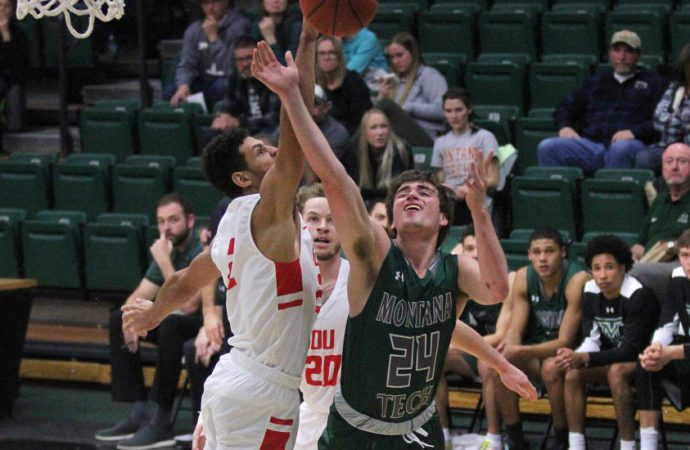 Saturday night, it was Southern Oregon’s time to rebound.

The Raiders bounced back from Friday’s 21-point loss to Carroll College to beat Montana Tech 83-73 in a non-conference men’s basketball game at the HPER Complex. (Stats)

The game was part of Tech’s Tipoff Classic.

“They’re a really good team,” Oredigger coach Adam Hiatt said of the Raiders. “They played horrendous yesterday. I knew and our staff knew that they were going to play great today, and they did. Anytime we had a mistake, they capitalized.”

The Orediggers, fresh off Friday’s impressive win over Eastern Oregon, started fast. Tech led by as much as nine points at 24-15.

The Raiders, though, rallied to tie the game at 32. Tate Hoffman bucket put Southern Oregon on top for good at 34-32 with 4 minutes, 32 seconds left in the first half.

Another Hoffman bucket with 12:45 left in the game extended the Raider lead to 59-47.

The Orediggers battled back to cut the lead to one point twice —once on 3-pointer by Troy Owens Jr. and one on a bucket by Taylor England.

Each time, the Raiders had an answer.

Hiatt said that is because the team’s defense had an off night.

“Overall, we just didn’t have great energy tonight,” he said. “We didn’t defend very well. I take all the blame for that. It was a short turnaround against a really good team. We didn’t have a lot of prep time. I’ve got to do a better job getting our guys in position to defend. They really carved us up, in particular in the second half.”

The Orediggers were playing without point guard Nate Ward, who is dealing with an injury.

“He’s really good defensively, and he gets us into our stuff,” Hiatt said of Ward. “It slowed us down a little bit and kind of altered our rotation.”

The worst part of the loss was the Orediggers hit on just 15 of 29 shots from the free throw line.

“I’m not sure we were 100 percent focused for this game, as evidenced by the poor free throw shooting,” Hiatt said. “We had a lot of just timely misses when needed every point to maybe get over the hump. We just weren’t able to convert when we needed to.”

The game was the end of a tough nine-day stretch to open the season for the Orediggers (2-2). Counting Tuesday’s exhibition loss at Idaho State, Tech played five games over that span.

Hiatt said his team is using this tough schedule to improve as the difficult Frontier Conference season looms.

“We have a really long ways to go to get to anywhere close to where we aspire to,” the coach said. “Right now we’re not very good, but we hope to be good in a couple of months.”