Put some respect on their name

It seems that maybe some have forgotten just how good the Butte Central Maroons actually are. The Maroons only loss came earlier this year in a rematch of the title game against Fergus, by the way Eric Loos sat out that game due to what I consider a dumb rule. 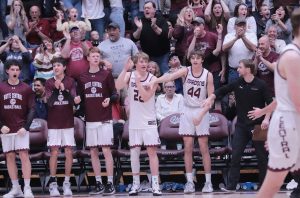 He received an unsportsmanlike conduct penalty in his final football game this year, and instead of serving it the following year, Loos could not do so being a senior, so per MHSA they made him sit out his first game of his next extracurricular sport.

B.S we can all agree on that.

The Maroons continue to impress after that loss cruising to a 5-game win streak, and just tonight knocking off undefeated Frenchtown, pretty handedly as well. But still the Maroons the defending State Champs are already being written off by the state after their one loss at the beginning of the year, other games haven’t even been close.

If I know Brodie, well that’s just more fuel to his and his teams fire, the Maroons are streaking, and Dougie Peoples is still slashing defenses on a nightly basis. Watch out Class A the Maroons aren’t going away anytime soon.

Please do us a favor and put some respect on Butte Centrals name!