Providence-bound Parini always giving it her all

Gabbie Parini was exhausted after running the final leg of the 1,600-meter relay.

The Butte High senior laid face down on the turf near the finish line, trying to catch her breath. She could hardly talk as teammates approached to offer congratulations.

“I just went all out for it,” Parini explained. “I just heard everyone cheering for the girl behind me, and I didn’t want her to pass me.”

No, this wasn’t the state meet. It wasn’t even divisionals. This was the first meet of the season, and it was a race that included two teams from Missoula Big Sky and two more teams from Butte High.

Parini’s team placed second in the race, though she held off the third-place challenger.

Basically, it was a practice for the Bulldogs, whose outside practices had been held mostly inside leading up to the first competition of the season.

Still, Parini was running like her life depended on it.

That is the type of attitude that means the University of Providence in Great Falls will be getting its money’s worth with the scholarship it is giving to Parini to wrestle for the Argonauts.

With Tuesday’s meet in Missoula called of because of rain, Parini headed to Great Falls to formally sign her NAIA National Letter of Intent to join the Argo’s women’s wrestling program.

“That’s pretty cool,” Butte High track coach Arie Grey said of Parini’s signing with the Argo women’s wrestling program. “The sky is the limit for her. I’m excited to see her in her next stage.” 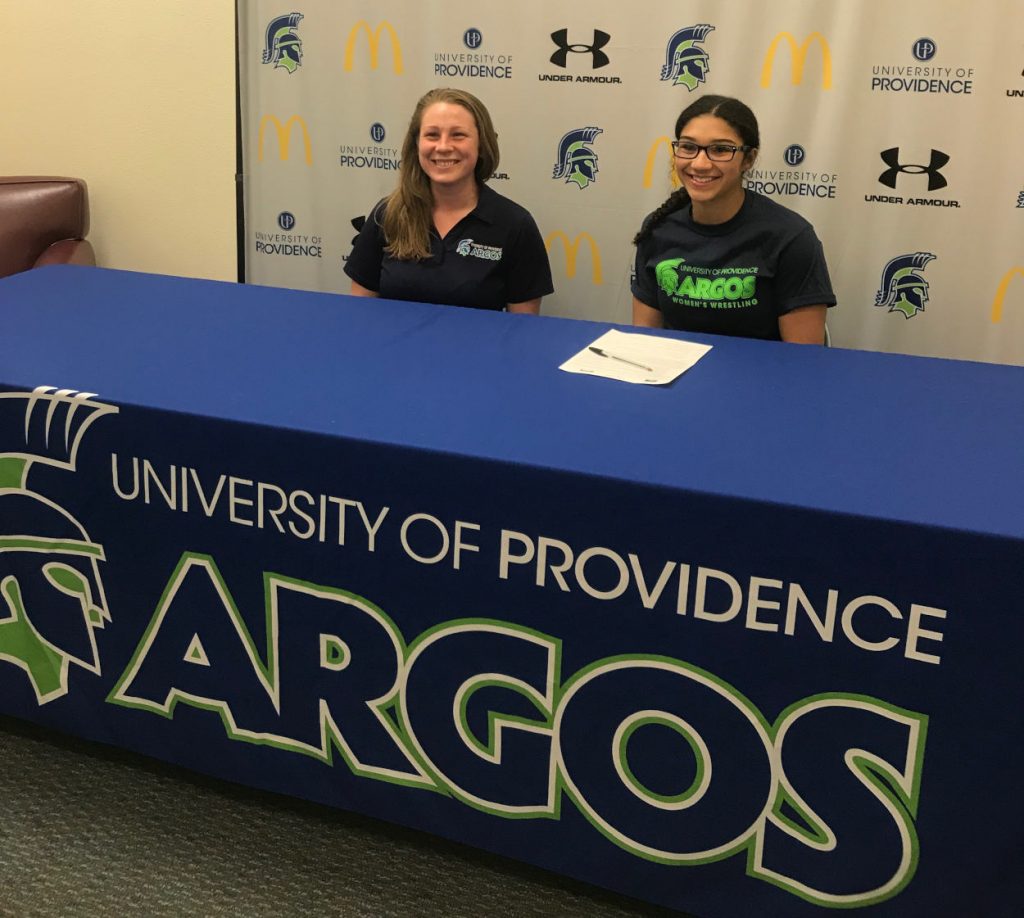 Gabbie Parini, right,  sits next to University of Providence coach Carlene Sluberski after signing with the Argos Tuesday. (Courtesy photo)

Parini is on pace to compete in the Class AA State tournament for the fourth time next month in Kalispell. She was a member of the Butte High wrestling team the past two seasons.

Butte High wrestling coach Cory Johnston said Parini’s wrestling career started during a conversation in math class. Parini was looking for a way to get into better shape for track.

“She asked if she could do some of our workouts,” Johnston said. “I said, ‘you can’t do the workouts with us if you’re not on the team.’ She said, ‘I guess I’ll have to be on the team then.’”

Parini said she saw wrestling as a way to make herself a better athlete. She also said it is fun.

“I’m just really competitive and always pushing myself,” she said. “I always wanted to do a contact sport, so I just went out for it.”

She also had some wrestling role models to following in Kobe and Kameron Moreno.

“I saw my cousins Kobe and Kameron do it, and I just realized I want to do it, too,” she said.

While on the wrestling team, Parini quietly went about her business for two seasons. She earned a varsity letter this past season, and she wrestled at the tough 132-pound weight class for the Bulldogs in the Eastern AA seeding tournament.

“When you’re in her situation you have to always out work everyone just to prove you belong,” Johnston said of being the only female on the team. “She exceeded that.  She’s not much of a talker, but she showed up and worked every day.”

In addition to helping her Bulldog teammates with practice competition, Parini also found some success on the mats.

During a mixer hosted by Butte Central late in the season, Parini gave Whitehall’s Connor Johnson a solid battle before suffering a second-round pin. Johnson went on to win the Class B/C State title at 132 pounds the next month in Billings.

“During a couple of duals when we had some of our varsity guys out, we plugged her in,” Johnston said. “She won a couple of matches.”

After her sophomore season, Parini decided to stop dancing, where she was a member of the prestigious Dynamic Dance & Tumbling Academy of Butte.

“I quit because I want to be more serious about track and looking for scholarships,” Parini said.

Her days on the wrestling team definitely made Parini a better track athlete, Grey said.

“Wrestling really helped her with the mental side,” Grey said. “In wrestling, you’re constantly in your brain. All of our athletes who wrestle come out tougher mentally.”

Grey said Parini has also become a mentor to the younger athletes on the track team.

“She has taken leadership role on, and that is neat to see,” the coach said.

Even though she signed with the Argos, she isn’t giving up on the idea of running track in college. She might try going out for the team at Providence. She is keeping her options open. 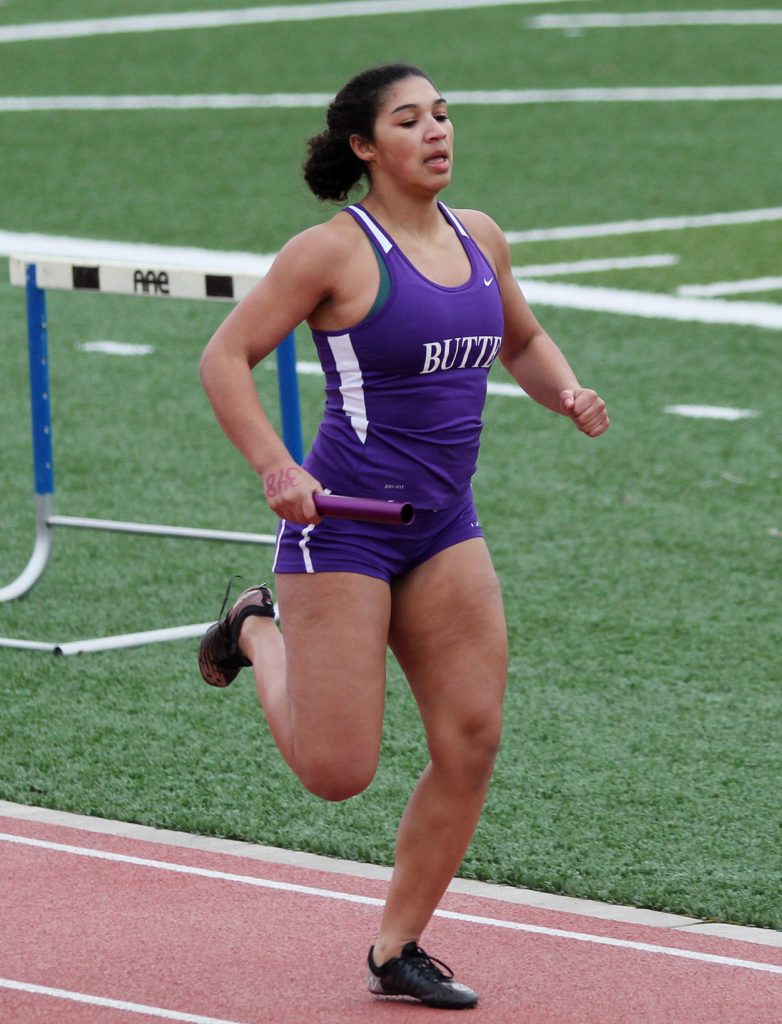 “I was thinking trying Providence out for a year, and if I wasn’t liking it I would go to Missoula for track,” she said. “I love track. It’s probably my favorite sport.”

Parini, who will room with future Argos soccer player Marti Ludwick in Great Falls, has her future career planned out.

“I want to go for athletic training,” she said, looking toward Butte High Athletic Trainor Christine Mayer. “I just see Christine and it looks fun.”

During the football season, Parini lettered as a manager for the football team. That means she will leave Butte High with six total letters.

The first one came when she qualified for state as a member of the Butte High 400-meter relay team as a freshman. She did the same as a sophomore.

Last Thursday in Missoula, Parini jumped a personal-best 16-8 ½ on her second jump of the season. That leap is a state qualifier, and it assures Parini of her fourth track letter.

“She had a big jump to start the season,” Grey said. “She’s just going to get better and stronger as the season goes on.”

Grey pointed out that Parini really started working at the long jump midway through the season. She focused more on the sprints early on.

“It’s kind of neat to see how far Gabbie has come,” Grey said. “Early in her career she was dead set on her short sprints. As she got more mature, she si more into the 400.”

Parini prefers to run the 400 as a leg of the 1,600 relay because she is running for her teammates, too.

“I can never do an open four, but being with a team it’s a lot more fun,” she said. “You just push yourself even more.”

She demonstrated that by running all out on the final leg of the first 1,600-meter relay of the season.