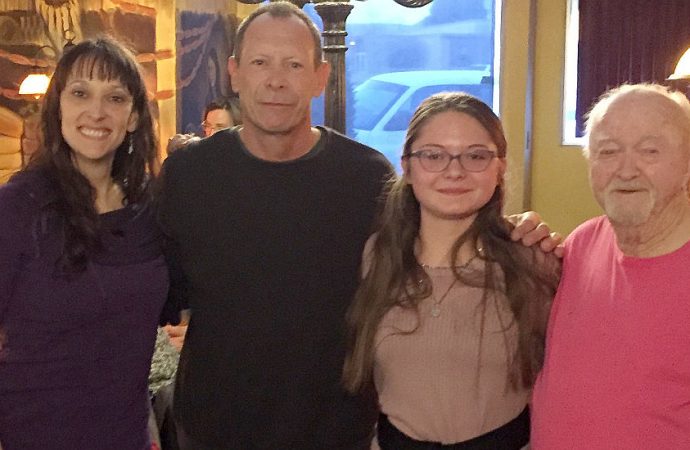 From left, Sarah Lightner, Master Jeff Beckett, Lauren Powers and Master Jim Miller pose for a photo after Beckett and Powers were presented black belts in Taekwondo Saturday night at the Chef’s Garden in Butte.

Lauren Powers thought she was at the Chef’s Garden Saturday night to support Jeff Beckett.

Then, the 13-year-old Powers received her surprise. Miller presented Powers, a seventh grader at East Middle School, with her first black belt.

The move was a surprise in more ways than one.

Black belts generally are not awarded to Taekwondo students until they are 15. Miller, though, decided to make Powers an exception because she is, well, exceptional.

“She has been so much help down at Rocky Mountain Marital Arts,” Miller said. “She can go out and teach a class.”

Miller said had been considering the promotion of Powers for eight or nine months.

“I was thinking about it for a long time,” Miller said. “She deserves it very much.”

Powers said she was blown away by the presentation. She previously earned her 1st and 2nd Poom, which is usually converted to a Dan black belt once the student reaches 15.

“I was just told to be here,” she said. “I knew Jeff was getting his promotion, and I came to support him.”

“I am very thankful for all of you for your help and guidance,” she said.

Beckett, 60, was also there for a major occasion. The promotion to 4th Dan lifts him to Master status in Taekwondo.

“He’s one of the best guys I have ever known,” Miller said of Beckett. “Rocky Mountain Martial Arts wouldn’t be the school it is today without him.”

Sarah Lightner, who bought RMMA from Miller nearly four years ago, was there to applaud Powers and Beckett on the big night.

“You both definitely make my life much easier,” she said.