Versatility might hold the formula for a Butte Central football win Friday night. Head coach Don Peoples Jr. holds hopes with the Maroons moving and substituting to fill in for injuries.

The BC team is hitting the road to play Corvallis in a Western A Conference game on the Blue Devils’ home field. The kickoff is scheduled for 7 p.m.

Butte Central goes into the contest with a 1-3 record while Corvallis is 0-3 and has scored just once so far this season. The Blue Devils, though, are a young, but experienced developing team that used a lot of sophomores and freshmen in starting roles last season.

“The kids have been practicing hard this week and their attitudes are good,” Peoples said about the Maroons and the effects of a homecoming loss to undefeated Hamilton last week. “Losing Jack (Keeley) limited our offensive plan. Rye Doherty and Kyle Holter, both, have been working out at quarterback, getting reps and will be ready to play.”

Doherty and Holter, both senior receivers, will both see duty at QB in place of Keeley, who separated a shoulder in the first half of the game against Hamilton. He missed the rest of the contest.

“We’re optimistic Jack will return this season,” Peoples said. “It is a first-degree shoulder separation, which is positive news (that it isn’t any worse). Jack was making great progress as our quarterback.” 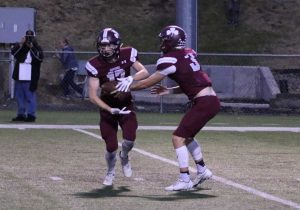 #3 Rye Doherty with hand off to #17 Kyle Holter

Keeley is a junior who took over the No. 1 quarterback spot this year following Luke Garrison’s transfer to Butte High. Keeley was in his second year starting in the secondary.

Doherty and Holter figure to be on the field almost all of the time. Both will also play their receiver spots when the other is the QB, and Holter will see some duty at running back, too, Peoples said. Defensively, Doherty is a starting linebacker and Holter is in the secondary. Both also play on return teams, as well.

“Corvallis is young,” Peoples said. “They have a lot of sophomores and juniors starting this year. They’re kind of like us in that they’ve had a brutal schedule to start the season and have lost to Hamilton, Dillon and Frenchtown. They had one bye week.

“So, they’ve played good football teams and had good moments against all of them.”

“(Aydan) Mayn is a good sophomore quarterback, who throws the ball well,” Peoples continued. “They have a few big kids in the line and they’re aggressive, defensively. We think they’re a pretty solid football team.”

Butte Central has a win over Browning with losses to Polson, Whitefish and Hamilton. Big scores have been recorded in all the Maroons’ games.

“The key for us this week will be to rush the passer, to get pressure on their quarterback,” Peoples said. “He’s effective when he has time.

“They went toe-to-toe with Hamilton for a half. They trailed Frenchtown 17-0 at the half and two or three red-zone drives they didn’t score on.”

Both senior Konnor Pochervina and sophomore Justus McGee will be at running back, as will Holter some, Peoples said. Pochervina has been hampered by an ankle injury this year. Holter, Doherty, Dougie Peoples and Zane Moodry will see time at wide receiver with Eric Loos playing tight end. Aydin Durkin is in again for Canyon Kibler at center. Kibler is out for the season with a knee injury. His older brother, Cayden Kibler, a senior, mans a guard spot with Dawson Rodgers at the other. Tanner Keith and fourth-year starter Riley Gelling are at the tackles. 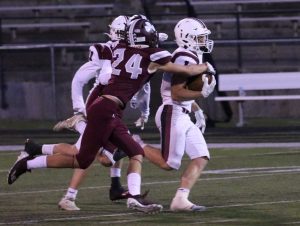 # 24 Justice McGee with a tackle

On defense, McGee will take over Keeley’s vacated cornerback slot with Dougie Peoples taking McGee’s former safety position. Holter, at the other corner, and Jake Tauschman, at the other safety, complete the secondary. Moodry and Pochervina join Doherty at the linebackers with Bryce Keane spelling Pochervina at times. The defensive line has Cayden Kibler at one Gelling and Loos at the ends. Sophomore Michael Peck is in for Canyon Kibler at the other tackle.

Ethan Andersch is the kicker and Moodry is the punter.

Corvallis’ ground game is led by backs Wyatt Miles and Logan Avery, while Dillon Potter, Ross Lewis and Justus Brickley spark the receiving corps and secondary. They’ll catch passes on either side of the ball. Josh McCrossin is the head coach of the Blue Devils.

“We have to be able to run the ball better than we have been Peoples said. “Our offensive line is progressing, getting experience and will be key to us running the ball well.

“Our kids are hungry for a win and wanting to find a way to get some wins. Our goal is to go out and play extremely hard, play together and find a way to be a better football team than we’ve been the first four weeks of this season. We’re excited to play.”