Dylan Cook was pretty sure he knew the answer to both questions posed by University of Montana football coach Bobby Hauck.

The first one was a layup for any football player in Montana, especially for one from Butte.

“Who was the first walk on from Butte to get a scholarship?” Hauck asked the team in what Cook saw as a competition between the offense and defense.

The answer, of course, is Mining City legend Colt Anderson, who went from walk on to All-American to a nine-year NFL player. He was the first Butte player go from a walk on to a scholarship in Hauck’s years as head coach.

Hauck’s next question was a little trickier.

“Who was last walk on to get a scholarship?” Hauck asked.

“I was like, Kyle Davis,” Cook said, referring to the now former Grizzly defensive lineman. “He said, ‘Nope. Dylan Cook.’”

That is how Cook and his teammates learned that the former Butte High Bulldog was now a Grizzly with a scholarship, and the room erupted with cheer.

“It was incredible,” Cook said. “It meant a lot. It was a great moment.”

Cook’s rise from walk on to blue chip is even more of unlikely story than that of Anderson, who played safety in college and the NFL after playing safety and running back in high school.

Less than two years earlier, Cook was playing quarterback at MSU-Northern in Havre. With the Grizzlies, he is an offensive lineman. 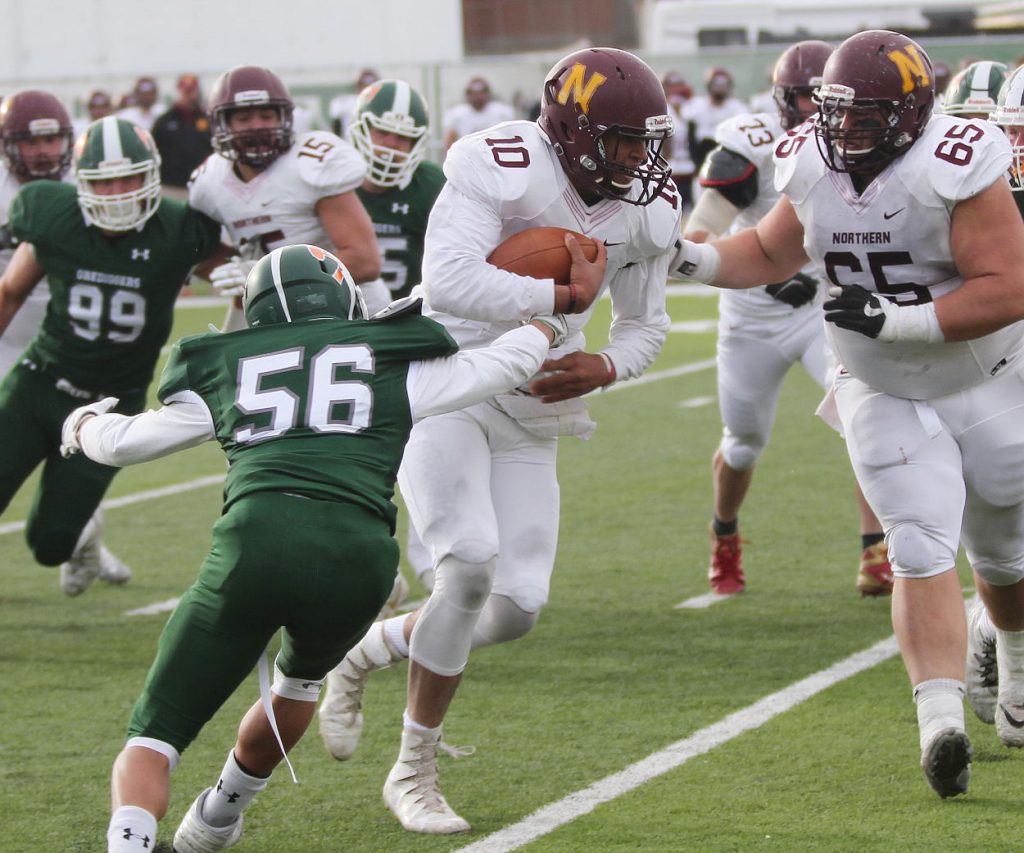 This is certainly a transition that happens rarely, if ever, in college football. Cook traded in the No. 10 he wore with the Bulldogs and Lights for No. 64 with the Grizzlies.

For Cook, who has been a quarterback trapped in a lineman’s body for most of his life, the move was a career saver in a lot of ways. It also might take that career to a level beyond college.

“It was pretty tough, but it was exciting at the same time because it was something new, something I’ve never done before,” Cook said of moving to the offensive line. “It really brought back my love for football.”

The move meant Cook had to give up on his dream of playing quarterback in the NFL after two less-than-memorable seasons at Northern.

“That is not a decision to be taken lightly,” Cook said. “It really is a big decision. It made me realize how much I love football.”

Instead of scoring touchdowns and passing for scores, Cook is now in the trenches, where you usually only get noticed when you do something wrong. How can that be fun after playing quarterback?

“It has its perks,” Cook said with a laugh. “We get to hit people without getting in trouble.”

Cook knows about being in the limelight, too.

After stepping in to fill the shoes of his brother, Dallas, Dylan Cook completed 237 of 400 passes for 3,124 yards and 30 touchdowns as a junior in 2014. Only Dallas Cook and Tommy Mellott have thrown as many touchdown passes in one season.

Dylan Cook’s seven touchdowns against Missoula Hellgate in 2014 is still the school record. He also ran for four touchdowns that season.

Dylan Cook, whose younger brother Devon is an aspiring young quarterback at Butte High, talks in awe of what his brother Dallas did while playing for the Bulldogs.

“I’ll never tell him that to his face,” he said with a laugh. “I’ll tell him that he had the defense and the receivers. But what he did as a junior was unbelievable.”

The Bulldogs and Dylan Cook had high hopes of a deep playoff run in 2015. They worked and dreamed of matching the achievements of the 2012 team.

Those hopes, however, did not last long.

Cook, who was 6-foot-5 and about 250 pounds as a senior, broke his collarbone in the first quarter of the first game of the season that year. Cook injured the shoulder on a designed quarterback run in Butte High’s 24-21 double-overtime win over Billings Skyview at Naranche Stadium.

“It was like a quarterback power like play,” Cook remembered. “A guy was on my back and we just landed perfectly to snap my collarbone.”

So, instead of leading the Bulldogs to the state title like his brother did three years earlier, Cook could only watch Butte High lost its next nine games.

“We had a pretty good solid group of seniors that I still talk to today,” Cook said of the 2015 Bulldogs. “We hang out and play video games.”

Those Bulldogs are still confident that they would have been contenders had they not suffered so many bad breaks.

When the scholarship offers from the big college football teams did not come in after the lost senior season, Cook signing with Northern on Feb. 3, 2016.

It turned out to be a particularly bad time to be in Havre. The Lights went 2-19 in Cook’s two years with Northern, though he only played sparingly at quarterback.

The next year, in 2018, Cook enrolled at the University of Montana and walked on to the football team, ready to play whatever position the team would put him.

Since he was 6-6 and about 285 pounds, that position was on the offensive line.

“They didn’t really specify what position because I was on scout team,” Cook said. “I wasn’t really working with the head offensive line coach. We tried everything out, and ended up on offensive tackle.”

Cook took to the position quickly. Heading into his junior season in 2019, the Grizzly media guide said Cook would vie for playing time at right tackle. Four games into the season, Cook took over as starting right tackle, and he held the position the rest of the way.

That included the Grizzlies second-round playoff win over Southeastern Louisiana and their quarterfinal loss as Weber State.

Through the season and beyond, Cook heard solid feedback from his fellow Grizzlies.

“I hear it from my teammates all the time, which is really nice to be reassured that I’ve picked up on it and I’m improved,” Cook said. “I’m just getting better every day, doing what I can.”

That improvement included six spring practices before the coronavirus pandemic shut the Grizzlies down. The spring game set for last Friday in Hamilton was canceled.

So now, Cook is living in Missoula with his roommates and teammates Lorenzo Brown of Las Vegas, Jace Schneider of Bellevue, Washington, and Colton Curry of Valier.

“We’re just hanging out in the house, doing homework and lifting,” Cook said. “We’ve got a rack in our garage. We probably go enough to lift about 250. We’ve been doing what we can. We’ve been running in the street, just trying to stay active.”

Cook is also finishing up his sociology degree, completing his classes online. He will graduate next month, and he hopes to get into a postgraduate program in public administration as he finishes up his football career with the Grizzlies.

Montana is scheduled to open the season Sept. 5 at home against Central Washington. While that date is iffy in these uncertain times, Cook is still focused on improving as an individual and as a team.

“We’ve got a lot of work to do, but we’ve got potential,” he said of the Grizzlies prospects in 2020.

Cook’s size alone would seem to make him an NFL prospect. He is weighing in at about 300 pounds, and it is not a soft 300, either.

The fact that Cook went from quarterback at an NAIA school to a starting right tackle in the Big Sky Conference so quickly also bodes well for an extra look from scouts.

While Cook could have possibly started for a season or two more if he had switched to the trenches right out of high school, he said has fond memories of his days in Havre.

“There’s a lot of good, quality dudes up there,” Cook said. “I still have a bunch of friends who I’m in touch with today. We went through the struggle together.”

He said he has absolutely no regrets regarding his two years with the Lights.

“I still wanted to live out my dreams of being a quarterback,” Cook said. “So, I took a little detour through MSU-Northern.”