Pickleball catching on in the Mining City 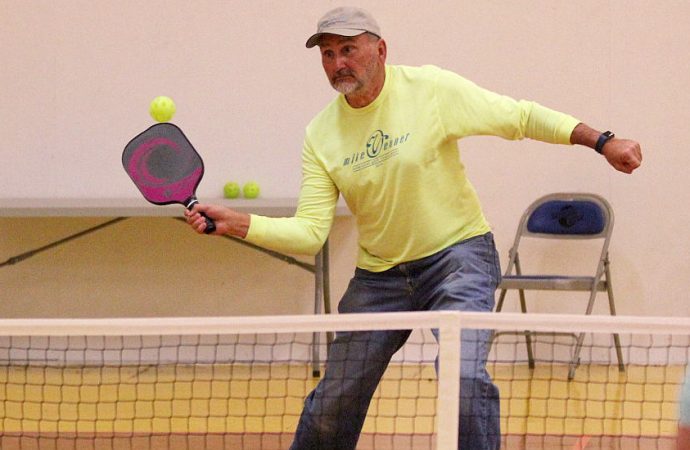 After suffering an injury to his hamstring and then his calf, Don Plessas decided his days of playing tennis were over.

So, Plessas turned to pickleball. Now, at 71, Plessas feels like he’s hitting his new sport at the right time.

“When you’re in your 70s, as far as this game is goes, you’re in your prime,” Plessas said between matches Monday morning at the Butte Civic Center Annex. “When you get out there you forget about age. It’s a competition.”

The former Butte High tennis coach is looking for more people to join him in playing pickleball, a sport that has been on the rise the past couple of years in the Mining City.

“We’re trying to get this to grow,” Plessas said.

Beginning Tuesday, Plessas will be offering free pickleball lessons through the Butte-Silver Bow Parks and Recreation Department. Lessons will be available at 11 a.m. and 7 p.m. on Tuesdays at the Civic Center Annex. All necessary equipment will be available.

Pickleball is a sport that is part tennis, part racquetball, part badminton, part ping-pong and part volleyball. Players use pickleball paddles, which are similar to but bigger than ping-pong paddles. Instead of tennis balls, balls resembling wiffle balls are used.

Players have to serve underhanded, which takes away the power advantage that is often seen in similar sports. Plessas said pickleball is more of a “finesse game.”

On Monday morning, the Annex was filled with more than a dozen men and women playing doubles on the three courts set up on the old Civic Center basketball court.

“Every day, Monday through Friday, these guys are out here getting good exercise,” Plessas said.

Players also play in the evening, and Plessas is trying to make that number grow.

“We’re trying to get some more working people out,” he said. “It’s not only an old-person game.”

Older people, though, have no problem playing.

“I took a lesson last year,” Plessas said. “The guy I took the lesson from was 84 at the time.”

Plessas took that lesson in Arizona. He lives in Butte, but he spends time in California and Arizona during the winter. He spends much of that time playing and teach pickleball.

“Teach is in my blood,” said Plessas, a retired computer teacher at Butte High. 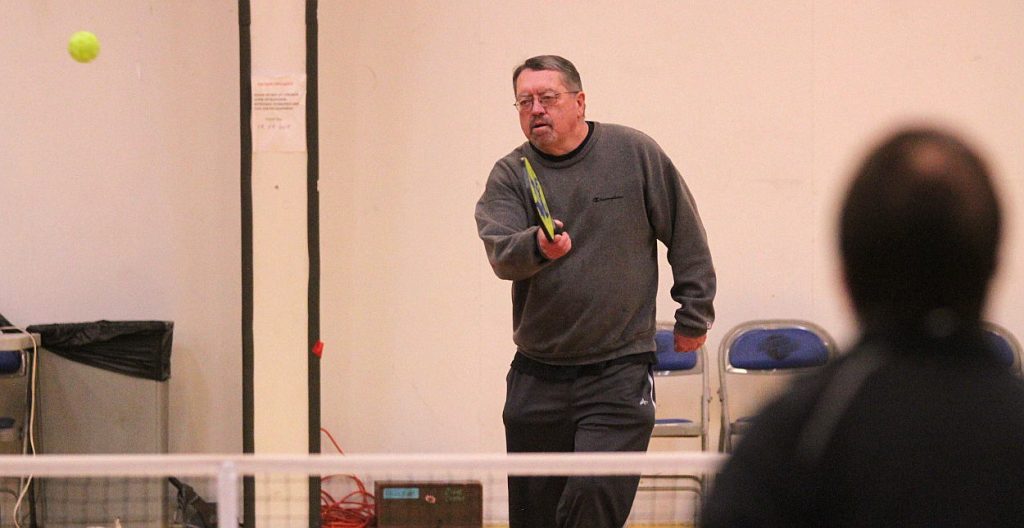 Phil Madrazo hits the ball during a match Monday morning.

A couple of years ago, Plessas introduced pickleball to the Mining City. Players have to pay a fee to join the Butte-Silver Bow leagues, but matches are also played at the Fitness Courts and outside at Father Sheehan Park in the summer. The two south tennis courts at Father Sheehan have pickleball lines painted on them.

“We usually have 16 to 20 people out every day,” Plessas said of playing in the summer. “After (the high school) tennis season, you don’t see anybody using the courts other than Mavis (Bentley’s) lessons.”

League play is not overly serious. It features open play where partners are switched up from match to match.

Plessas said new players who can’t make the Tuesday lessons can show up any other time and he’ll show them how to play the game.

“We’re just trying to get everybody to come out and play,” he said. “It’s a great thing to do. It keeps you active. What’s great about it is you can basically keep doing it forever.”

For more information about playing pickleball, call the Butte-Silver Parks and Recreation office at 497-6535.