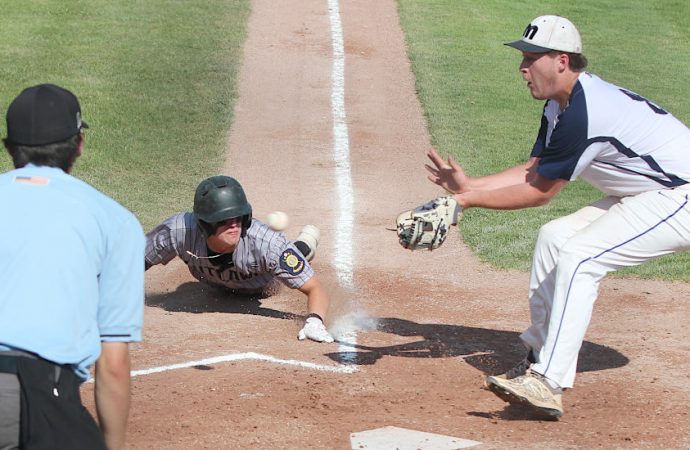 The Gallatin Valley Outlaws sent the Butte Miners to the loser’s bracket of the Southern A District tournament with a 12-2 win Friday evening at Milwaukee Park. The game was called after six innings by the 10-run rule. (Boxscore; bracket)

The Miners (27-15) will play the Dillon Cubs in an 11:30 a.m. loser-out game Saturday. A win would send them to a 5 p.m. game against Bozeman or Helena. Butte must win both those games and then win again Sunday morning to qualify for the Class A State tournament, which begins Thursday in Lewistown.

“We’ve got the guys to do it,” Miners coach Jeff LeProwse said of going the long way to Butte’s first State tournament since the Miners hosted the 2011 Class AA tournament at Alumni Coliseum. “We’ve still got a lot of pitching depth. We’ll go with (Ryan) Wahl in the morning and go after Dillon.”

Wahl, Butte’s ace, will take the ball with the season on the line. Then, Butte has a lot of options that include Kenley Leary, Hunter Salcido, Ethan Edwards Eyston Lakkala and Ryan Burt.

The only Butte pitchers not eligible Saturday because of pitch-count limits are Rylan Richards and Reece Cox. Cox is eligible to pitch again on Sunday.

The Butte Miners watch the action from their dugot. (Photo by Dan Chesnet, The Belgrade News)

On Friday, the Miners went with Burt as an opener for 30 pitches. The future St. Mary’s Marauder recently returned from a knee injury.

In the second round of the district tournament, Burt fell victim to a tight strike zone and did not make it out of the first inning.

The Outlaws took the lead for good with two runs in the first inning. They did their damage on one hit, three walks and a wild pitch.

“He wasn’t missing by much,” LeProwse said. “The zone was tight for both teams. I thought it was pretty consistent, but it was tight.

“The plan was to go with Burt for 30 pitchers no matter what. We got to about 24 and it was time to make a change.”

Richards relieved Burt with the score 1-0, one out and the bases loaded. He escaped with only one more run scored, but the Outlaws added a run in the second, two in the third and one in the fourth. Gallatin Valley blew the game open with six in the sixth.

Like with Burt, Richards and Lakkala struggled with the tight zone. Butte issued 13 walks, and eight of them came home to score. Another runner scored after being hit by a pitch.

“We were behind in the zone a lot. We had a lot of walks,” LeProwse said. “We’ve got to do better. We’ve got to hit better and we’ve got to pitch.”

Brandon Beedie pitched five innings of relief for the win.

“Credit goes to GVO in that game,” LeProwse said. “They beat us. Their pitcher threw really well, and they hit really well.”

Butte trailed 6-0 before getting on the board in the fourth. Wahl tripled and scored on a ground out by Eric Hart.

After the big sixth opened the game to 12-1, Butte went down fighting in the bottom of the inning. Leary tripled to score Aidan Lee, who singled.

Too much damage was done, however.

Richards went 2 for 2 with a double in the leadoff spot for the Miners, who could only muster five hits. Butte benefited from just two walks as Hart and Leary worked free passes.

The Miners quickly turned their attention to living up to their 2020 motto and doing better on Saturday.

“I still like our chances,” LeProwse said. “We’ve got plenty of depth.”