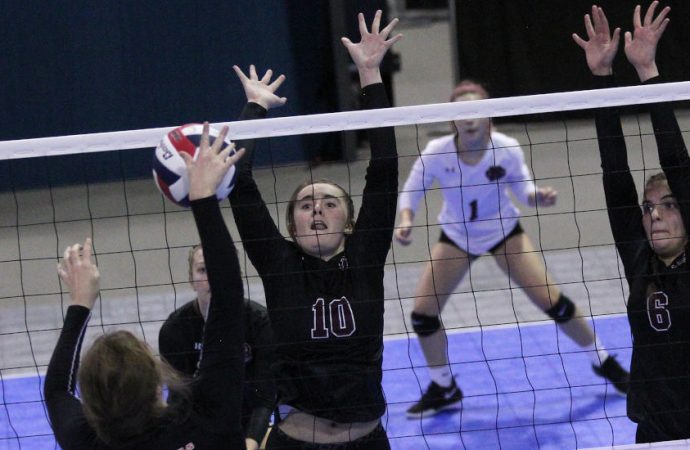 The Maroons struggled to find the groove that had carried them the past month plus, and Butte Central fell in three sets to Glendive in the opening round of the Class A State volleyball tournament at the Brick Breeden Fieldhouse.

The Red Devils won 25-16, 25-15, 25-20 to send the Maroons to Friday’s noon loser-out battle with Havre. The Blue Ponies fell in four sets to Corvallis right after the BC-Glendive match. (Bracket)

“I didn’t feel we were in rhythm. I saw a lot of nerves out there today,” BC coach Becky Hancock said. “I did expect that a little in the first game. Then I expected us to bounce back, but we didn’t. I just don’t feel like we got into the rhythm of our game.

“We just never put all the pieces together today.”

Of course, Meadow Torres had a lot to do with BC’s lack of rhythm. The 5-foot-10 Glendive junior tallied 20 of the Red Devils’ 41 kills in the match. She also notched a pair of blocks.

Brittany Kaufman, a 5-10 sophomore, and Karsen Murphy, a 6-foot senior each added eight kills for Glendive, which out killed the Maroons 41-16.

Hancock pointed to communication issues for the Maroons. Playing in the loud arena with four matches going on at the same time could not have helped that.

While they clearly were not at the best, the Maroons battled to the end. Hancock said she is confident she will see that fight Friday as BC looks for a deep run in the tournament.

The Maroons will need to win three matches — at noon, 2 and 8 — to make it until Saturday.

“We’re here,” Hancock said, focusing on the positive. “This is a big accomplishment for us to just be here. We’ve got tomorrow, and we’re going to regroup and get after it.”