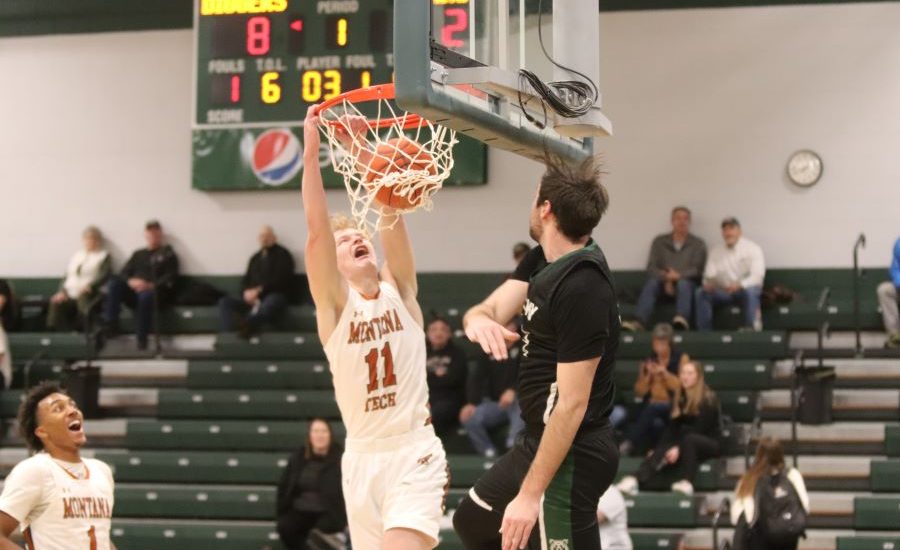 Montana Tech was poised in a men’s basketball win on Friday, and looked poised for resumption of it’s Frontier Conference schedule.

“If they’ll ever need to make pressure free throws, this (was a chance to see),” he said after the Orediggers defeated Keyano College of Ft. McMurray, Alberta, 80-70 in the Montana Tech HPER Complex. “I was happy with how our team responded. We’re getting mentally prepared for the (Frontier Conference) season.”

The Orediggers converted nine of 10 free throws in the last 5 minutes, 25 seconds of the game after forging a 63-52 edge. Michael

STATS Ure was the man on the hot spot. The last six foul shots belonged to him and he netted five as Keyano rode the 3-point shooting of Omeechi Williams to remain a late-game threat.

Two Williams treys and a drive for layup by Sean-Michael Clancey pulled the Huskies to within 72-67 of the lead with 2:23 still on the clock. Ure then scored from inside and caged four straight free throws on two consecutive trips back to the Oredigger end of the court after failed Keyano opportunities.

Clancey drilled a deep 3-pointer be 78-70 behind Montana Tech with 1:02 left. The Orediggers clinched firmly on a Caleb Bellach runner with 24 seconds to go. The Huskies were unable to convert on their next possession and NAIA 13th-ranked Montana Tech had won its last nonconference game of this season.

The loss was Keyano’s second in a row after starting its season 19-0. The Huskies fell 89-70 at Montana State-Northern Thursday night while the Orediggers were beating St. Mary’s of Calgary 98-62 in HPER Complex.

“(The Huskies) were shell-shocked in Havre last night,” Hiatt said, referring to the visitors’ loss to MSU-Northern. “Their coach (Jeremy Wielenga) knew they’d have a better effort today, and they did.”

Montana Tech suffered a slow start after the cruise over Calgary St. Mary’s 24 hours earlier. Hiatt pointed out Keyano was coming off a Thursday night game, too, and had to travel.

“It’s part of the maturing of a team, part of the process,” the coach said. “I was happy with how we responded to a little bit of adversity. We play each other three times in the Frontier Conference and so we’ll have more games like this.”

Friday, the Orediggers found their lift from 6-foot-6 freshman Hayden Diekhans. His shooting, drives to the basket, rebounding and defense boosted the team to a lead and then the clinch.

Keyano broke to a 7-0 lead to launch the game as Ben Simmons opened with a 3-pointer, then hefty 7-foot Taliik Ross muscled in two straight baskets from around the goal. Bellach put Montana Tech on the scoreboard with a pullup jumper three minutes into the contest.

Montana Tech trailed the Huskies only 13-12 after a Ure dunk off a pass from Crishon Dixon about midway through the half. Diekhans then sank a charity toss to tie the score, then gave his team the lead with a driving layup the next journey downcourt.

Clancey tied it up again with a short jumper before Diekhans hooped two more freebies and the Orediggers were ahead for good. Thursday game star Keeley Bake fed Bellach for a resounding dunk. After Ross scored on the inside for Keyano, Bake canned a 3-pointer. The Montana Tech pullaway was under construction.

Stefan Jovich scored for the Huskies, then the Orediggers put the foot to the metal with a 3-pointer by Asa Williams followed by an and-one from Dixon. The Montana Tech lead was then 28-19 and it held a 30-25 advantage at intermission.

The second-half play was fairly even most of the way. However, when Omeechi Williams sizzled in another 3-pointer for Keyano at the 13:08 mark, the difference was six points, 48-42, and sounded the alarm for the Orediggers.

Bellach and Diekhans funneled through a free throw apiece, then Bellach sank two more. He knocked down another two points on a rebound follow and then Diekhans took a pass from Camdyn LaRance and stuffed it through the hoop. Ure capped the 10-0 Montana Tech run with a spin beneath the goal that allowed him a basket from in-close.

“Hayden Diekhans was fantastic, I though,” Hiatt said. “He got off to a rough start when he missed a couple of sure shots in front of the rim he usually makes. But, I can’t be happier with his future and his present. He’s a freshman player with double-double potential every night.”

It was realized Friday with 14 points and 11 rebounds. He mixed in a team-high five steals as well. Bellach led the scoring with 25 points, Ure had 15 and Dixon finished with 12. Ure had seven rebounds, too, and Dixon had five. He and Bellach each dished three assists.

Montana Tech will take a 13-2 overall record that includes a 1-1 conference mark when it dives back into Frontier play with a home game against Carroll next Thursday.