The Orediggers suffered no turnovers and upended 21st-ranked Montana Western 33-24 in a Frontier Conference game at Vigilante Field. The win was Montana Tech’s first in Dillon since prevailing 30-24 in double overtime on September 15, 2012, when Nick Baker threw four TD passes, two of which came in the OTs. 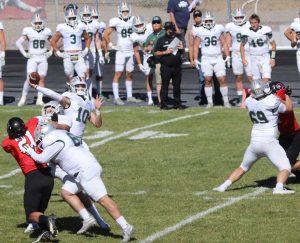 Thelen was very capable in relief. The 6-foot-3, 205-pound sophomore from Great Falls passed for three touchdowns, all in the first half, while completing 15 in 28 attempts for 200 yards. The Montana Tech offensive line dominated before halftime against the conference’s top-ranked defense. The Orediggers led 30-14 at halftime and went to more of a ground attack after intermission – especially in the last couple of drives while preserving the eventual win and melting ticks off the clock.

Blake Counts wound up carrying the ball 17 times for 120 yards, including a touchdown. His lugs included several second efforts, tackle breaks and even some hurdling as he powered upfield. Kaleb Winterburn had 59 yards on 10 carries.

“This was a big challenge for us going in,” Samson said. “It was really challenge upfront to our offensive line and our defensive line. I felt this game was won in the trenches. I’m proud of the way our lines played.

“And, Blake did a great job for us. He practices everyday like he’s the starter. Today, he took care of the ball and made great decisions.”

Montana Tech received the opening kickoff and took about five minutes to score. The Bulldogs never caught up. Thelen finished the 64-yard drive with a short pass Winterburn hauled in a short pass at about the 5-yard line and then chased a blocker across the goal line.

Thelen’s other TD passes were of 3 yards to Counts on a similar play and 13 yards to Trevor Hoffman. The catch marked league-leading receiver Hoffman’s first touchdown of the year.

Counts also tunneled for a 2-yard touchdown, Ryan Lowry kicked a 32-yard field goal and the Orediggers were awarded a safety when a Montana Western snap in punt formation sailed over STATS punter Eddie Dewart’s head and through the end zone.

The Bulldogs’ scoring plays were runs of 1 and 5 yards by Reese Neville and Colten McPhee, respectively, a 47-yard pass from Jon Jund to a lunging Trey Mounts, and a John Mears field goal of 29 yards.

“Both running backs did a great job,” Samson said, referring to Counts and Winterburn. “We know Western is a good team. So, our goal today was to start fast.

The Orediggers had a 14-0 lead before Montana Western got on the board and owned a 30-14 margin at halftime.

“That was all heart by our guys,” Samson said, talking about grinding out the early two-touchdown lead and maintaining it most of the game, then fending the Bulldogs off in the second half with effective ball control. “We go those six, seven yards a play, all running the ball, on the last drive, running time off the clock.”

The last drive ended with Lowry’s field goal. It clinched the win with 1 minute, 39 seconds left and the Bulldogs then needing two scores to avoid the loss – not enough time.

“I’m really fortunate to have the guys I have on my coaching staff,” Samson said. “It’s a great day to be an Oredigger.”

Counts’ TD blast through the pile with 4:57 left in the first half was the last time Montana Tech reached the end zone and it increased the Orediggers’ advantage to 30-7. McPhee tallied his TD for Montana Western with 32 seconds left to plant the seed of the Bulldogs’ second-half comeback. The Orediggers were on the positive side of the 30-14 difference.

Star quarterback Jon Jund’s TD throw to Mounts for Montana Western cut the margin to 30-21 at 8:40 of the third quarter. The teams traded punts the rest of the period and then the Bulldogs mounted more threats in the last frame.

A 16-play drive by the Bulldogs found a brick wall at the Montana Tech 12-yard line and they had to settle for Mears’ field goal. However, it pared the margin to 30-24 Montana Western was within striking distance of the lead with 7:39 left on the clock. 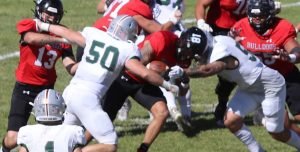 The Orediggers took the ensuing kickoff and launched their key long drive – a 10-play march, all but one on the ground, from their own 25-yard line. Counts and Winterburn alternated carries – Counts picking up 35 yards, including a 29-yard rip that acquired favorable field position, and Winterburn gaining 31. The lone pass play was a flea-flicker type of design meant for Thelen to catch from Jaden MacNeil. It fell incomplete.

After the failed pass, Lowry booted his win-clinching field goal.

Montana Tech’s defense limited Jund to a 12-for-27 showing passing the ball with one touchdown and one interception. He threw for 217 yards. However, running the ball, Jund stacked 101 yards with 15 keepers. 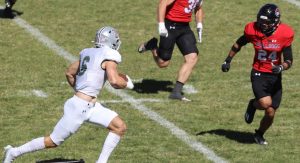 Keyshawn James-Newby collected nine tackles, Cole Wyant registered eight and Ben Windauer had seven to lead Montana Tech unit. James-Newby and Windauer each made five solo spots. Jake Orvis had an interception off a deflection. Jordan Washington broke up two passes and James-Newby, Alaric Greil and J.P. Fitzpatrick were all on sacks.

Blake Sentman caught five passes for 68 yards to lead Montana Western receivers. Braden Smith topped the Bulldogs’ tackle totals with 11, followed by Braden Swank and Kameron Rauser with 10 each. They had no sacks.

The bleachers on both sides of the field were full and another couple hundred spectators ringing the playing field in standing-room only.

“I need to do a shout-out to our fans,” Samson said. “It is awesome to be on the sidelines on the road and turn around to look behind you and see the visitors’ side is packed. That’s what it means to be a part of ‘Digger Nation. That’s a testament to our friends.”

Montana Tech now owns a 3-1 record in both Frontier Conference and overall play. The Orediggers will celebrate Homecoming next Saturday with a game against Montana State-Northern at Bob Green Field. Montana Western is now 3-2 overall, 2-2 in the Frontier. The Bulldogs will also have their Homecoming game next Saturday while playing host to Rocky Mountain.