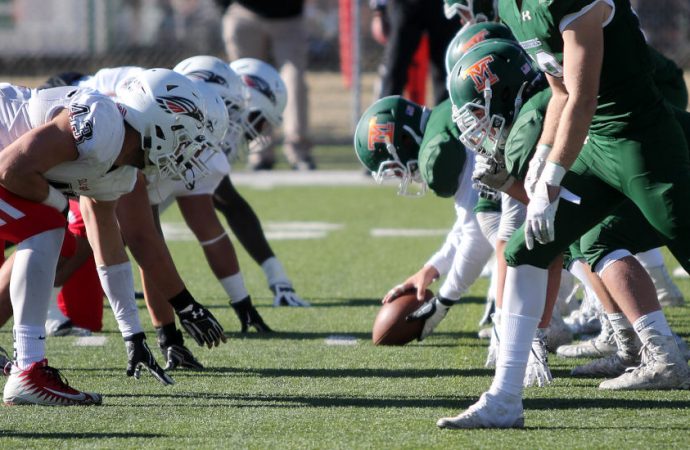 If history any guide — and it usually is in the Frontier Conference — Saturday’s Montana Tech-Southern Oregon football game will be well worth the price of admission.

Especially on the Bob Green Field at Alumni Coliseum, something good almost always happens when the Orediggers meet the Raiders. Saturday’s battle kicks off at 1 p.m. (Radio: KBOW, 550 AM, 101.5 FM or online)

With the Orediggers welcoming some Montana Tech legends back to campus for Hall of Fame Weekend, we have the makings for something special.

Whether it is for the Frontier Conference championships or simply because the two teams don’t like each other, the Orediggers and Raiders have played in some classic battles. That goes back to Chuck Morrell’s first game as Tech coach in 2011.

In that game, dubbed the “Pat Hansen Game,” the Orediggers won in double overtime on the freshman running back’s fifth touchdown of the day. Last year, Tech beat Southern Oregon 38-31 in wild overtime game in Butte.

“Both of our teams have been highly competitive and we’ve played each other a bunch of times,” Morrell said. “It’s been a fun game to be a part of for sure.”

Southern Oregon comes to town need a win in the worst way. At 0-3 overall and 0-2 in the Frontier, the Raiders likely have to win out to have a chance at the post season.

Of course, one of those losses is against Sacramento State of the Big Sky Conference. The Raiders dropped a pair of three-point games to Eastern Oregon and the College of Idaho.

Morrell warns to not led the Southern Oregon record fool you.

“They are, without a doubt in my mind, the best 0-3 team in the country,” Morrell said. “First of all, they’re really well coached. Second of all, they just have some many quality skill guys all over the field, which is always a handful for us.”

Redshirt junior Wyatt Hutchinson highlights that arsenal of talent on the Raider roster.

Hutchinson, who started all 10 games a year ago, passed for 831 yards and five touchdowns through three games. He also has racked up 262 yards and three scores on the ground.

Hutchinson has thrown six interceptions, but four of those came at Sacramento State.

“He’s one of the most athletic players in the league,” Morrell said of Hutchinson. “He’s got the ability to get out of jail and run. He’s got a great arm and the ability to transition and run all over the field.”

“He has some tremendous speed,” Morrell said of the Raiders signal caller. “He is physical when he runs. He is tough to get down.”

Christian Graney, a 5-foot-11, 180-pound sophomore, is the top target for Hutchinson. Graney has already racked up 19 catches on the season.

Jordan Suell, a 6-6 senior, is the home run hitter for Southern Oregon.  He has 11 catches for 237 yards and three touchdowns. He averages 21.5 yards per catch.

On the other side of the ball, the Orediggers must be ware of Michael Chisley Jr.  The defensive back already has three interceptions on the season. He has racked up 73 return yards after the picks.

Morrell said Tech’s early touchdown, a 5-yard pass from Jet Campbell to Nate Sander, got the Orediggers off on the right foot a week ago. Tech led 21-0 before winning 35-10.

“It was awesome to watch our offense take the ball all the way down and score,” Morrell said. “When that happens, it just gives your entire team a lot of confidence.”

Playing in his second game under offensive coordinator Kyle Samson, Campbell was solid, though not overwhelming statistically in the win. He complete 9 of 16 passes for 168 yards and two TDs. Trevor Hoffman caught five passes for 92 yards and one of those TDs.

“He looked fantastic last Saturday,” Morrell said of his sophomore quarterback. “He was executing the scheme at a high level, was running with some tenacity. He played an excellent game last week.”

On defense, sophomore defensive end Logan Kolodejchuk busted onto the scene with a monster game. The Columbia Falls native racked up 10 tackles.

Naoki Harmer added eight tackles, while Justin May and Jackob Clark each got in on five. Arthur Flynn and Zach Trumble each registered a sack, and Jake Orvis and Ike Schweikert picked up passes to help the Orediggers dominate the game of field position.

“Defensively, our guys really flipped the switch and played much more consistently,” Morrell said, referring to the win at Eastern Oregon. “For the most part we put together a consistent effort from start to finish.”

At halftime, the Orediggers will introduce their 2019 Digger Athletic Hall of Fame class.

Next Saturday, the Orediggers will head to Havre to take on MSU-Northern. Following a week off, Tech will play host to Montana Western on Oct. 12.