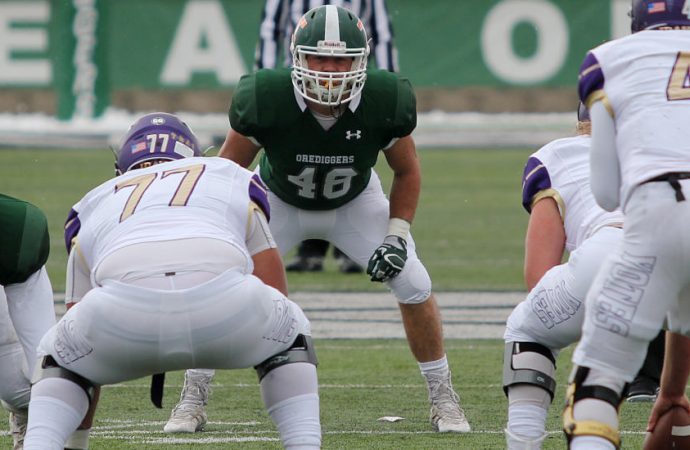 This is not the easiest way to start the football season.

In No. 15 College of Idaho, Montana Tech will be face a team that has been sizzling hot for the last 11 months Saturday at Alumni Coliseum.

The Coyotes will be looking for their seventh straight victory when they come to town to take on the Orediggers in the 1 p.m. “Copper Game.” (Radio: KBOW, 550 AM, 101.5 FM or online)

Frontier Conference coaches and the media picked the Coyotes to win the conference title for the first time since they brought back football six years ago.

The Orediggers, though, will be focusing more on the Orediggers as they kick off the season.

“As much as it is about C of I being a very quality football team, at the end of the day it is about us,” Montana Tech ninth-year head coach Chuck Morrell said. “We’ve got to do our jobs, take care of business, play together, play team football and avoid the big mistakes.”

While the Oredigger enter the game having the advantage of seeing the Yotes on film from last week, Tech also has a drawback of not having a game to shake off the rust.

“So often in early-season football at any level — whether it’s high school, college or NFL — you see so many early-season mistakes that prevent you from winning a football game,” Morrell said. “That’s something we’re certainly on guard against, but we’ve got to be ready to deal. The disadvantage we have going into this is we haven’t had a game to work out those kinks.”

The Yotes simply did not have any kinks.

The veteran team saw five different players run for touchdowns in the win. Senior quarterback Darius-James Peterson led the way, passing for 100 yards and a touchdown and running for 114 yards and a score.

Junior Nick Calzaretta added 124 yards and a touchdown for the Yotes, who bring back pretty much every significant player from last year.

“They played exceptionally well last week,” Morrell said. “They’re returning so many starters, really on both sides of the football. Offensively, a lot of these guys this is their third or fourth game starting.”

The Orediggers, meanwhile, enter the season with a nice mix of returners and newcomers.

Tech was hit hard by graduation — particularly with receiver Dion Williams and a host of playmakers on the defensive front seven. The Orediggers, though, bring back some key weapons on both sides of the ball.

Running back Jed Fike is back for a senior season. The former Whitehall Trojan ran for 2,592 and 24 touchdowns in his first two seasons since transferring to Tech from Dickinson State.

Promising sophomore Tyler Folkes will back up Jed Fike, and true freshman Blake Counts could figure into the mix at running back.

The former Billings Central Ram will start at quarterback after actually practicing at that position during camp. Injuries forced Campbell to move from receiver — where he worked during his redshirt season and the first half of his redshirt freshman campaign — to behind center.

Campbell had his ups and downs in the new role. He also showed some big-time playmaking ability.

“He’s had a great fall camp,” Morrell said. “He looks very confident and very comfortable back there.”

“If you’re starting quarterback goes out beats the conference champion the last week of the season, you know you’ve got something special there,” Morrell said.

Redshirt freshman Kaleb Winterburn will go into the season as the Campbell’s top backup after Brandon Battle suffered a season-ending knee injury in camp.

Sophomore Trevor Hoffman is back after catching 47 passes for 511 yards. He tied Williams with six TDs and averaged 11.1 yards per catch.

“He was basically our No. 2 weapon a year ago,” Morrell said. “ Now he’s ready to take over that role. Dion is a big loss, but we bring back almost everybody else.”

Butte High graduate Kiley Caprara, a sophomore, steps into the starting lineup at receiver with Hoffman and Junior Alec Wooley-Steele. Ontario Johnson, Quade McQueary and Sam McCamley are listed as the Nos. 2 on the depth chart.

The Orediggers are also high on tight ends Nate Sander, a junior, and Kenny Lafayette, a sophomore.

Up front, the Orediggers have a nice nucleus to build around in seniors Grant Benz and Hayden Smith and sophomore Hunter Spatz. They’ll be joined in the starting lineup by experienced sophomore Tristan Stauffer and redshirt freshman Trey Copeland.

“We bring back a pretty veteran offensive line,” Morrell said.

Defensively, the Orediggers bring back four starters in the secondary in cornerbacks Naoki harmer and Damaree Morris. And safeties Tucker Rathe and Justin May.

They also have fifth-year seniors Carter Myers and Jacob Clarke back to anchor the linebacker corps.

Sophomore Logan Kolodejchuck and freshmen T.J. Makihele and Zach Trumble are also expected to see time up front, while freshmen Ben Windauer, Blake Allred and Cade Harris and sophomore Derek Rodriguez will back up at linebacker.

Sophomores Jake Orvis and Teddy Croft and juniors Matthew Drake and Tanner Chase give Tech depth in the secondary.

“I certainly don’t feel like the cupboard is bare,” said Morrell, who is stepping back into the defensive coordinator role after long-time assistant B.J. Campbell moved on. “There’s going to be some new pieces on defense. In terms of the talent, it’s there. We’ve just got to get some game experience on those guys.”

Junior Tyler Padilla will handle the kicking and punting duties. Sophomore Cody Gagnon is his backup.

Next week, the Orediggers travel to Eastern Oregon before returning home to take on Southern Oregon on Sept. 21.