Orediggers did not ‘run it up’ on MSU-Northern

In the days since Montana Tech’s record-breaking 93-19 win over MSU-Northern in a Frontier Conference football game at Alumni Coliseum, questions have come in about the Orediggers “running up the score” on the Lights.

Those questions and accusations might heat up following today’s resignation of Northern coach Aaron Christensen. (More on that later.)

Most people who attended the game or listened to Paul Panisko and Ron Hasquet call the game on KBOW, however, will definitely tell you the Orediggers were not in pour-it-on mode Saturday. 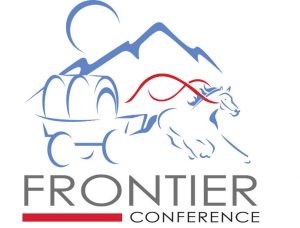 How else could you explain the fact that six Orediggers — yes six — scored or threw their first collegiate touchdown in the lopsided victory?

The Orediggers were down to third- and four-string players in the second half of that game.

Tanner Osborne was the lone starter to pick up his first TD on the day. The redshirt freshman tight end caught TD strikes of 45 and 4 yards in the win.

Braden Feisthamel, who ran for 128 yards while filling in for Nolan Saraceni in Tech’s playoff win over Dickinson State last November, also scored his first two college touchdowns. Feisthamel, now a backup to Jed Fike, scored on runs of 6 and 71 yards.

The Lights’ style of play also factored into the high score. Northern is hurry-up team that would like to run 100 plays in a game.

Northern attempted 40 passes, completing just 18. That led to the clock stopping a ton, and it gave the Orediggers more and more chances to score.

The young backup Orediggers — many seeing their first extended playing time — took advantage of those opportunities.

Peoples — and the rest of the Orediggers — thought he scored two plays before his touchdown when he reached for the pylon on a scramble left. The Butte Central graduate, though, was ruled out inside the 1-yard line.

After a field quarterback sneak, Peoples lined up in shotgun formation for a play that appeared to be a run call to redshirt freshman Braxton Porter.

Peoples bobbled the snap before scrambling and finding a hole for a 1-yard touchdown run.

After the score, Peoples’ teammates lifted the quarterback above their heads. Peoples pointed to the sky to honor his late sister Mairissa, like he did so many times as a senior at Butte Central in 2014.

Following the game, Peoples watched his younger sister Mollie play her first basketball game as a Montana Tech Oredigger at the HPER Complex. The younger Peoples scored seven points — one more than her brother — in her college debut against Yellowstone Christian.

Assault on the record books

The Orediggers shattered their record for points in a game while running up a team-record 932 yards of offense in the win.

Last season, the Orediggers set a team record with 446 points in 12 games — including the two playoff games.

Through seven games this season, the Orediggers have scored 362 points. That’s an average of 51.7 points per game, and it puts the Orediggers on pace to score 517 points in 2017.

Of course, Tech has no more games against Northern, a team the Orediggers outscored 163-46 in two games this season.

When Osborne scored his first touchdown Saturday, it sent many Oredigger fans to their roster. After all, it is not every day you see No. 93 with the ball in the end zone.

That number, though, is an eligible one. It is also one Quinn McQueary has noticed.

Osborne, a Columbus High School product, caught one pass in each of the first five games he played. He hauled in four passes for 72 yards and the two scores on Saturday.

Osborne’s 45-yard touchdown on a play-action pass might have also looked familiar to Oredigger fans. That is the exact same play Tech used to beat Montana Western in the final game of the 2015 regular season.

Then, Andrew Loudenback faked a hand off and hit a wide-open Kolby Kansala on a 55-yard touchdown with 1 minute, 42 seconds left in Tech’s 24-17 victory that sealed the Frontier Conference title for the Orediggers.

But the sack didn’t stop Wines, who didn’t see much time after the first quarter, from falling into a tie for No. 3 on the NAIA 2017 sack list. He was No. 2 heading into the game.

Wines is tied with Josh Evans of Evangel (Missouri). He trails the 10 sacks of Chris Overton of St. Ambrose (Iowa) and the 9.5 of Sean Rogers of Southern Oregon.

Rogers, the NAIA Defensive Player of the Week, registered four sacks in Saturday’s win over the College of Idaho. He also had four sacks the week before against Eastern Oregon.

With three games left, Montana Western senior running back Hunter Thomsen is closing in on 2016 season total of 889 yards.

Thomason ran for 132 yards in Saturday’s 30-21 win over Eastern Oregon at Vigilante Field. He has 749 yards on the season.

The Great Falls Russell product has ran for more than 100 yards in five games this season, including the last four. The Bulldogs won three of those four games. 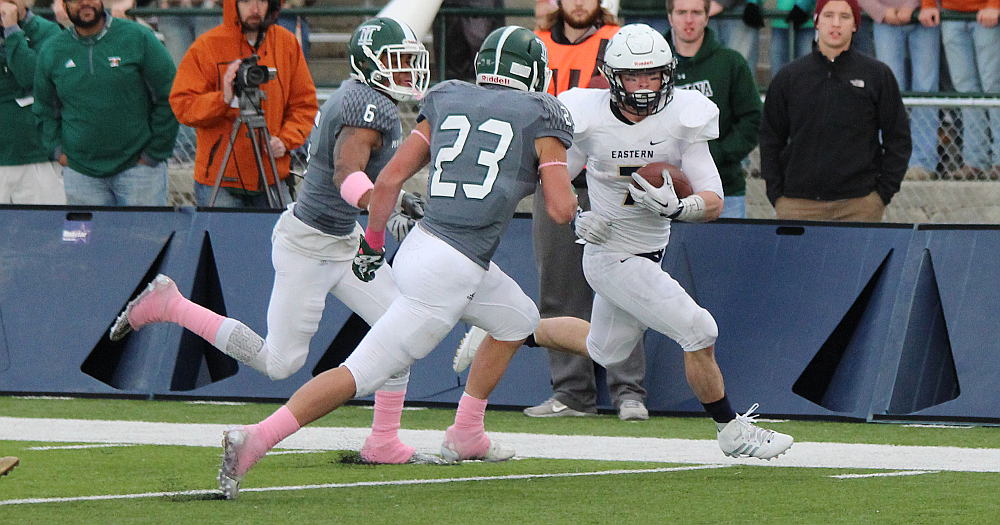 Eastern Oregon receiver Jace Billingsley is chased down the sideline by Montana Tech’s Zavier Marsden and Will Davey during Tech’s 42-24 win over the Mountaineers Oct. 31, 2015. (Bill Foley photo)

Billingsley, a native of Winnemucca, Nevada, was signed as an undrafted free agent by the Lions in 2016 after an outstanding career for the Mountaineers. This is the second time the 5-foot-9, 189-pound receiver was added to the Lions active roster. He suited up in the team’s regular-season finale in 2016.

As an Eastern Oregon senior in 2015, Billingsley ranked fourth in the country with 1,931 all-purpose yards.

The Lions will host to the Pittsburgh Steelers Sunday night in Detroit.

Billingsley’s last game in Butte was on Halloween 2015. The Orediggers beat the Mountainers 42-24 that afternoon. Billingsley ran 15 times for 73 yards in that game. He also caught two passes for 34 yards.

The former Southern Oregon has hit on 7 of 10 field goals for the Giants this season. He has a long of 51 yards.

Rehkow was a punter and kicker for Idaho coach and Butte native Paul Petrino in Idaho. In Moscow, Rehkow, a former Buffalo Bill, was a Lou Groza and Ray Guy award semifinalist.

Christensen didn’t mention Saturday’s loss to Montana Tech when announcing his resignation with three games left in his third season in Havre, but it would not be a stretch to assume the embarrassing defeat at least played a factor in his decision.

The coach, though, stayed positive on his way out the door.

“I would like to thank the school for the privilege and opportunity to coach the Northern football team the last three seasons,” Christensen said in a statement. “It has been a great experience for me and my family and I wish nothing but the best for MSU-Northern in the years to come.”

After taking over for the successful Mark Samson, Christensen’s Lights posted a 2-27 record. Northern’s lone Frontier Conference win in that stretch was last year’s 28-14 home win over Carroll College.