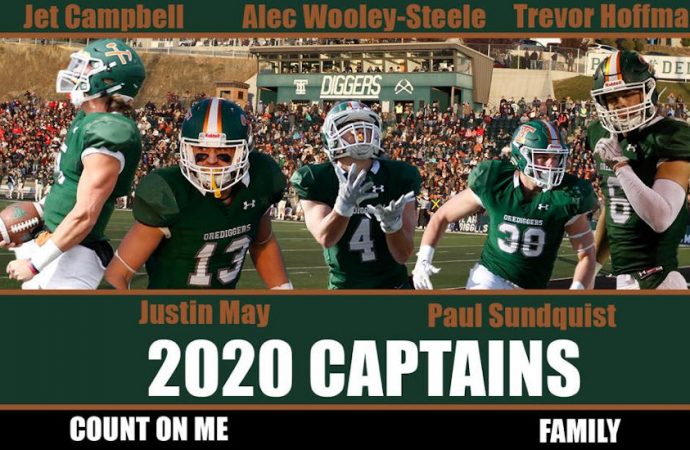 Captaining the Orediggers will be Jet Campbell, Justin May, Alec Wooley-Steele, Paul Sundquist and Trevor Hoffman. They were selected to lead the team by their Oredigger teammates.

Campbell is a 6-foot-3, 210-pound junior quarterback from Billings Central. He began is redshirt freshman season as a receiver and went on to become the team’s starting quarterback.

May is a 6-1, 190-pound senior safety from Joplin. Last season, May earned first-team All-Frontier honors as a leader on the stingy tiOredigger defense.

Sundquist is a 6-2, 215-pound senior linebacker from Sandpoint, Idaho. He recovered from an offseason injury to be a force for the Oredigger defense last season.

Hoffman is a 6-4, 205-pound junior receiver from Renton, Washington. Hoffman hauled in 98 passes for 1,529 yards and 14 touchdowns his first two seasons with the Orediggers.

The Orediggers are scheduled to open the season Aug. 29 at Eastern Oregon. Tech’s first home game is set for Sept. 5 against Carroll College.