Orediggers men dim Lights to get back in win column 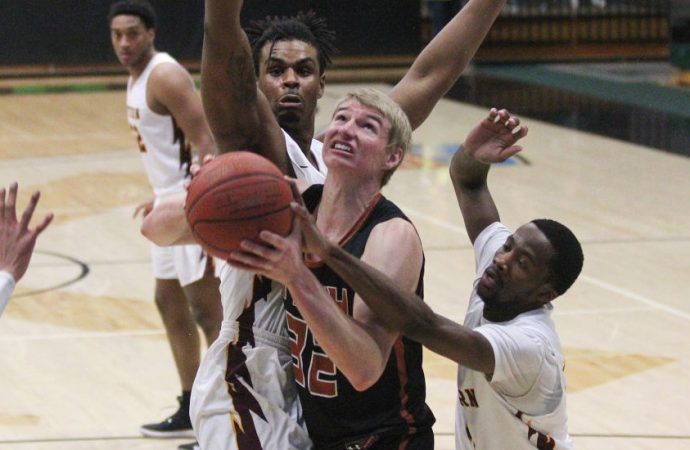 Montana Tech's Cody Baumstarck goes up for a bucket between MSU-Northern's Cedric Crutchfield, back, and Mascio McCadney Saturday night at the HPER Complex. (Bill Foley photo)

“Taylor England got the ball in the post and skipped it across the court to Drew Huse,” Hiatt recalled, “and he made the shot from the corner. It was a game-changing shot.”

“It was Drew’s first win against his big brother,” Hiatt said.

There were a lot of Huse-on-first nuggets pertaining to the outcome of the game, played on the Montana Tech HPER Complex. Drew Huse is a 6-foot-2 sophomore guard for Montana Tech and his older brother, Adam, is a 6-1 senior guard for MSU-Northern. Both are sons of former Montana State head men’s basketball coach Brad Huse and played high school ball for Bozeman, having spent a year as teammates. Also, Adam Huse’s current coach is Shawn Huse, younger brother of Brad, making him an uncle to the collegiate Huse brothers.

The win was the Orediggers’ first at home over the Lights since 2012, Hiatt pointed out, and their first over the Lights in Hiatt’s four-year tenure. Hiatt also noted that Montana Tech senior Dylan Pannabecker had been 0-9 in his Oredigger career versus MSU-Northern until the Saturday night win.

Drew Huse’s 3-pointer was followed by a basket from Sindou Daillo, upping Montana Tech’s lead to 71-60.

The teams traded points the last two minutes, England notching Montana Tech’s last two points on free throws before Kavon Bey of the Lights netted a foul shot. The teams let the final 8 seconds click off the clock without attempting another shot.

“We played very well, tonight — from start to finish,” Hiatt said about Montana Tech’s seventh win in its last eight games. “Our emphasis was to guard the 3-point line against Northern. They’re a very good 3-point shooting team and we emphasized keeping them off the 3-point line.”

As a result, the Lights were held to 4-for-12 shooting from the hotdog stand.

Montana Tech led comfortably for most of the game, looking intent on handing Montana State-Northern its fourth straight loss. The Orediggers scored the first eight points of the game with England canning half of them. A 6-0 run fueled by England soon after opened a 19-8 Montana Tech gap about midway through the first half.

“Taylor England was in attack mode from the get-go,” Hiatt said. “I was proud of his effort. If we can get him the ball inside, he’s practically unstoppable in the Frontier Conference.”

The 6-7, 230-pound junior from Helena powered his way through the key and opposition most of the way en route to 24 points and eight rebounds.

MSU-Northern came back a little and trailed by only seven points, 21-14, when the Orediggers went off on another eight-point run, punctuated by a Diallo 3-pointer.

“Sometimes, we have lapses of losing focus and losing energy,” Hiatt said. “Tonight, we kept it up.”

The Lights regrouped for runs, however, They pulled to within 62-56 as Adam Huse and Mascio McCadney rang in 3-pointers in an 8-0 surge. Drew Huse blunted the rally with a scoop to finish a scoring drive David Harris then tallied on a pullup before England steered in a layup while tumbling to the court. The action brought the score to 66-58 in the Orediggers’ favor.

Bey then scored off a pass from McCadney, which led to the play from England to Drew Huse for the telltale 3-pointer out of the corner.

Diallo had 21 points for Montana Tech, and Pannabecker finished with seven, Huse and Christian Jones five each, Troy Owens Jr. and Derrius Collins four apiece, Cody Baumstarck three and Connor Kieckbusch two. Pannabecker snared four steals. Montana Tech went to 11-6 with the win, squaring its conference record at 3-3. The Orediggers will be home against Rocky Mountain on Thursday.

Bey shined for the Lights with 18 points and Huse finished with 13. Jesse Keltner pulled down a team-high seven rebounds, and Huse and Devin Bray each dished three assists. MSU-Northern is 11-7 for this season and has a league ledger of 1-5.