Orediggers hit the road looking to bounce back 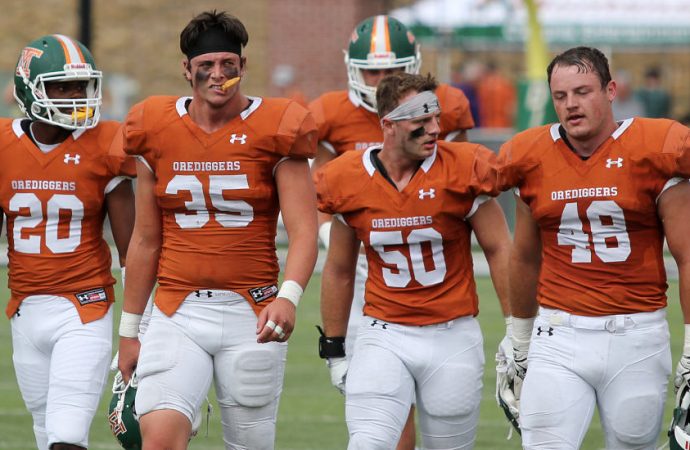 Montana Tech defenders head to the other side of the field to start the fourth quarter last Saturday against the College of Idaho. They are, from left, Matthew Drake, Ike Schweikert, Blake Allred and Carter Myers. Justin May is shown in the background along with Oredigger head coach Chuck Morrell. (Bill Foley photo)

The schedule makers were not kind to the Montana Tech football team in Week 1, sending No. 15 College of Idaho to the Mining City.

Week 2 does not get much, if any, easier.

The Orediggers will be in La Grande, Oregon, Saturday to take on Eastern Oregon in a Frontier Conference game. Kickoff is 2 p.m. Mountain Time. (Radio: KBOW, 550 AM, 101.5 FM or online)

College of Idaho topped the Orediggers 28-14. Montana Tech’s offense, under new coordinator Kyle Samson and second-year quarterback Jet Campbell, finally hit its stride late in the game. Unfortunately for the Orediggers, it was too late.

Tech’s defense showed some serious problem, though it gave up too many big plays.

The Mountaineers fell 48-12 to the Coyotes in their season opener two weeks ago in Caldwell, Idaho. Last week, Eastern Oregon went on the road to upset Southern Oregon 24-21.

Checking the Numbers
· The Orediggers rank second in Pass Defense after giving up just 163 yards to COI
· EOU is first in Pass Defense (138.5 yds) and seventh in scoring defense (34.5 pts)
· Montana Tech had two forced fumbles and recoveries last week against College of Idaho and leads the Frontier Conference in Turnover Margin with +2
· College of Idaho, who leads the Frontier Conference in Scoring Defense, held the Orediggers to 14 points last weekend and Eastern Oregon to just 12 points the previous week
· Montana Tech gave up 28 points to the Yotes and Eastern Oregon fell 48-12 in Caldwell, Idaho

Scouting the Mountaineers
· Head Coach Tim Camp is in his 12th season with EOU and is the longest tenured coach in the Frontier
· Coach Camp has an overall record of 68-53
· The Mountaineers lost their opening game at No. 15 College of Idaho 48-12 but rebounded last week upsetting Southern Oregon 24-21 in a comeback victory in Ashland
· Defensive End Sage DeLong was named the NAIA Defensive POW notching 8 tackles, 5 TFL and 3 sacks
· Linebacker Chase Van Wyck recorded a blocked punt and a blocked field goal and was named the NAIA Special Teams POW

For the Record
· Montana Tech split with Eastern Oregon last season winning 24-17 at home and falling in La Grande 35-17
· The last time the Orediggers defeated the Mountaineers in La Grande was September 24, 2016 winning 37-24
· Coach Morrell is 7-7 against Head Coach Tim Camp and Eastern Oregon and is 3-4 on the road in La Grande

OFFENSE
Fike’s First Day—Senior running back Jed Fike rushed 21 times for 97 yards on Saturday against the Yotes. The two-time All-Conference back  made it in to the end zone in the fourth quarter for his lone touchdown of the day. Fike is 4th in the conference in rushing yards per game. He just missed the century mark which he as only missed 5 times in 20 games at Montana Tech.

High Time for Hoffman—Redshirt sophomore Travis Hoffman leads the Frontier and is 2nd in the NAIA in receptions per game after hauling in 11 balls for 149 yards.  Hoffman had an acrobatic catch for a touchdown in the fourth quarter and just missed on a long pass in the first half.

Running the Offense—Redshirt Sophomore Jet Campbell started the 2019 season at the position he finished in 2018. Campbell completed 60.7% of his passes going 17-for-28 with one touchdown. The Billings Central product ranks 4th in the Frontier in pass efficiency with a 137.6.

Tight End Target—Redshirt junior tight end Nate Sander proved to be a valuable target Saturday. He was second on the team with three catches. Sander had three catches all of last season.

DEFENSE
Saturday Takeaways—The Orediggers had a pair of fumble recoveries Saturday against the Yotes. Tucker Rauthe jumped on a forced fumble in the first half and Carter Myers forced a fumble and Jacob Clarke returned it 13 yards in the second half.

Linebacker Prowess—Linebackers Carter Myers, Ike Schweikert and Jacob Clarke led the team in tackles Saturday. The trio combined for 12 unassisted tackles and 27 total. Myers led the team with 12 total tackles on the day including.

Suppressing the Pass—The Orediggers held College of Idaho to just 163 yards passing on Saturday. The Yotes completed 10 of 17 passes.

Leading the Line—The lone senior on the defensive line is Arthur Flynn. The Orlando, California native led the defensive front with 6 tackles (2 solo, 4 assisted) and one tackle for loss.

New Returner—The Orediggers had a new kick returner in redshirt sophomore Naoki Harmer. The Bellevue, Washington native returned five kicks for 79 yards and a long of 23.