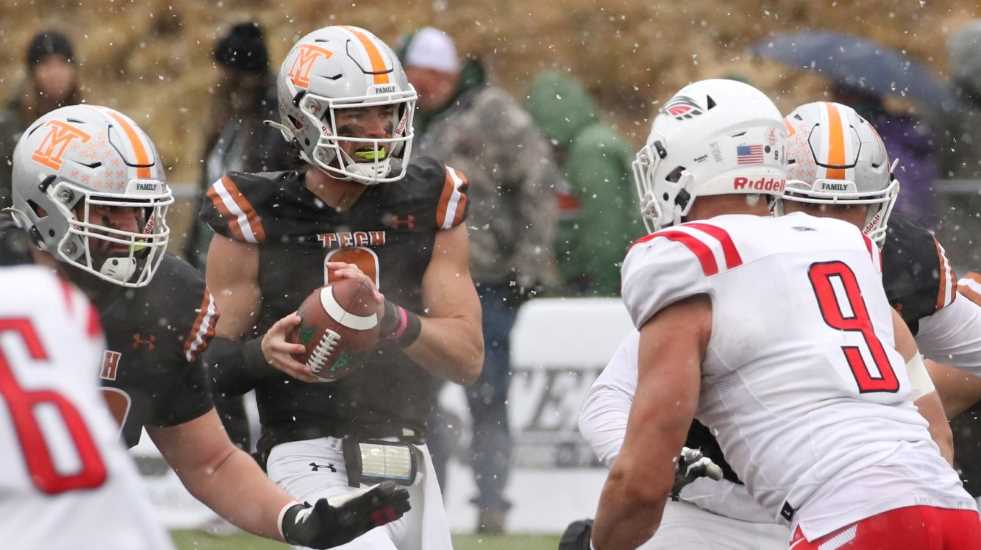 Or, so it must have seemed to the Southern Oregon Raiders. NAIA No. 24-ranked Montana Tech scored a defensive touchdown, one on special teams, three on passes and one on a run in a 45-21 Frontier Conference college football victory at Bob Green Field.

Half of the touchdowns were for more than 30 yards, two for more than 60. Defensive stands and turnovers thwarted the Raiders.  STATS  Two Southern Oregon passes were intercepted, including Windauer’s pick-six, and the Orediggers also tallied on a Fisher recovery of a punt blocked by Harmer.

Campbell and Thelen took turns at quarterback and both had success. Campbell returned to the lineup after three weeks of being on the sidelines with an injury.

“What a great day to be a ‘Digger,” Montana Tech head coach Kyle Samson said after the game. “We had big plays all around. There were a lot of big plays.”

“It started with Blake Thelen’s big throw to Trevor Hoffman at the start. And, I’m so proud of Clay Fisher, a Butte boy getting a touchdown, and Ben Windauer gets a big interception.”

The game was played on a snowy afternoon, the first snow in Butte of the fall, with 1,340 spectators in attendance. Temperatures were in the mid-30s and a chilly breeze sometimes swept across the facility.

The Orediggers had the first possession and ran and passed for 39 yards through three downs. Then, Thelen saw Hoffman behind the Raiders’ secondary and passed to him for an in-stride catch and a 61-yard score. Ryan Lowry’s perfect day of place-kicking began with his extra point after the TD.

The teams traded punts and Southern Oregon’s second series ended in an Oredigger touchdown. Facing fourth-and-eight from their own 24, the Raiders set up to punt. Harmer and Fisher, a Butte Central alum, both busted through the line and swamped punter Colton Santas, Harmer smothering the punt. It bounced all the way into the end zone where Fisher caught up with it and jumped on it. The Orediggers had a 14-0 lead 10 minutes into the fray.

“We’re lucky we have two great quarterbacks,” Samson said of cousins Thelen and Campbell. “I was proud of Jet and how he came back from the (knee) injury and played a great game. Blake had a great game.”

Thelen threw for 132 yards on completing nine of 16 attempts. He tossed for two touchdowns. Campbell connected on two passes, including a 35-yard TD pass to Alexander.

Southern Oregon was not lacking in the big-play capability, either. The Raiders showed their ability moments later when Gunnar Yates broke a 68-yard scoring dash, slicing to the right, reading a block and heading up the east sideline.

“We have some tough kids,” Samson said. “We responded after their big plays.”

So, the Orediggers duly responded. Three plays after Southern Oregon’s touchdown, Thelen hooked up with tight end Logan Kennedy on a short route. Kennedy, though, broke the tackles and rumbled on for a 64-yard touchdown completion. Montana Tech led 21-7 after one quarter.

The Raiders used a 72-yard march to pull within a TD of the Orediggers’ lead. The 12-play drive included a 34-yard run by Yates. He finished the drive with a 1-yard push into the end zone.

Windauer returned the Montana Tech lead to two touchdowns when he picked off a deflected pass and raced 31 yards for the touchdown.

It was Windauer’s first game back after sitting out the Orediggers’ last game, two weeks ago at College of Idaho, with an injury.

“It was awesome,” Windauer said. “I was just kind of sitting out there, not getting too much action on my side of the field and the ball went up in the air and came right to me.  I grabbed it and went for the sideline just like they taught me.”

“Somebody on the defensive line popped it up into the air at the line of scrimmage and I couldn’t get to the end zone fast enough after I caught it.”

The junior linebacker from Columbia Falls was wearing a wide smile and felt nothing but sunshine in Saturday’s cold.

“It is an honor to get to be out here on the field with my friends,” he said, “and get the win.”

His pick-six was chosen play of the game by the panel that decides, and Thelen was voted the Oredigger MVP of the game.

Southern Oregon refused to go away, however.

The Raiders came out after halftime rejuvenated. They took the ball at their own 25 after Lowry kicked again into the end zone. Yates went through the line for five yards on first down, then sliced by the left side for 70 and a touchdown. Cesar Ruiz’s extra-point kick was good and Southern Oregon was still contending in the contest, trailing by only 28-21 with almost all of the second half left to play.

Defenses gave little. Then the Raiders felt confident enough to go for a first down on fourth-and-two from their own 49-yard line. Quarterback Blake Asciutto dropped back to pass and Harmer blitzed in from the secondary. Harmer’s sack was for a 12-yard loss and Montana Tech had the ball on the Southern Oregon 37.

Campbell rolled right and passed to Alexander on third down. The receiver gathered in the throw and dodged two defenders on the sideline before stepping across the goal line to finish a 35-yard TD play. The Orediggers owned a 35-21 advantage heading into the fourth quarter.

Montana Tech gained possession on a Raider punt three plays into the fourth quarter after the defense kept Southern Oregon pinned at its own 17-yard line. A string of 11 running plays took the Orediggers to the Raiders’ 2-yard line. Montana Tech settled for a 19-yard field goal by Lowry and a 38-21 command with 6 minutes, 26 seconds left to play.

Southern Oregon again suffered a sack on fourth down, this time by James-Newby, and the Orediggers set up shop on the Raiders’ 22-yard line and an opportunity to clinch the victory. Kaleb Winterburn did so with a 5-yard carry five running plays later.

Southern Oregon threatened to score once more, but Downs intercepted Asciutto in the end zone to thwart the attempt.

“We took the air out of the ball in the fourth quarter,” Samson said, “and just ran the ball.

“All three phases – offense, defense and special teams – did their jobs today. They fed off each other. And, it was in goofy weather.”

“We’re right back in the thick of things,” Samson enthused, eyeing next weekend’s trip to Billings for a rematch with Rocky Mountain.

“And, how about a huge shoutout to Butte,” he closed. “In the worse weather of the year, we still got a great crowd.”

Counts led the Montana Tech running game with 120 yards on 19 carries. Winterburn gained 65 on 10. Torgerson had three pass receptions for 71 yards to lead the team. He also had a kickoff return for a touchdown called back on a penalty. Hoffman caught two passes for 70 yards, Kennedy had the one catch for 64 and Alexander grabbed four aerials for 60 yards. Punter Andrew Almos averaged 45.8 yards per boot. Harmer led the team in tackles with nine, Jordan Washington had eight, and Windauer and James-Newby each had six.

Nolan Rinefort and Jake Regino led the Southern Oregon defense with eight tackles each. Seth Miller had seven. Taye Courtney had a fumble recovery. The Raiders’ offense saw Asciutto complete just 15 of 32 passes against the Oredigger defense. The passes netted 132 yards. Yates had a big game carrying the ball with 212 yards on 18 totes. Christian Graney led in receiving with four catches for 38 yards.