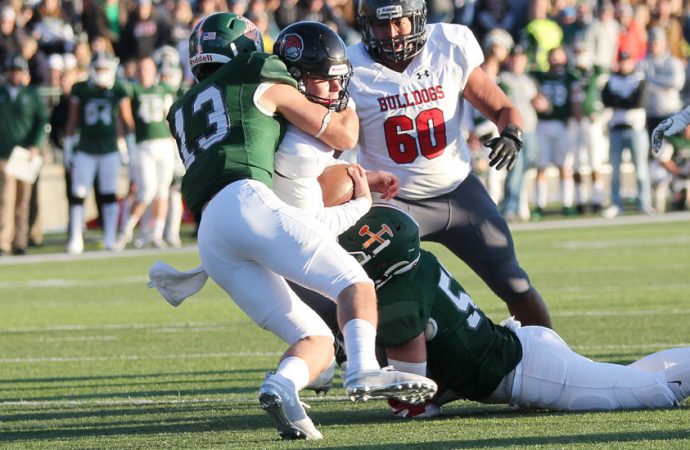 Montana Tech’s men up front — Hunter Spartz, Tristan Stauffer, Hayden Smith, Trey Copeland and Grant Benz — took over the NAIA National Game of the Week, and the No. 22 Orediggers finished off a 35-12 homecoming win over No. 15 Montana Western in dominating fashion. (Stats)

With senior star running back Jed Fike out for the season with an injury, the Oredigger hogs led the way as Tech amassed 292 rushing yards.

They paved the way for sophomore Tyler Folkes and true freshman Blake Counts, Tech’s newest one-two punch. Folkes ran for 180 yards and a touchdown, while Counts added 83 yards and two fourth quarter scores in the win.

“Big moments like this are what we live for,” Benz said as he celebrated with family and friends after the win that brought the Orediggers into a 4-1 tie with Western for second place in the Frontier Conference. “Moving a man against his will from point A to point B, it’s awesome.”

Behind the offensive line, the Orediggers used two long, time-consuming touchdown drives to put the win to bed.

“That’s what we can do. We’re going to wear down teams,” said Carter Myers, one of three fifth-year senior starting linebackers for the Orediggers.. “Fourth quarter, O-line, that’s when they get stronger. They put in all this time and effort, and that’s when it shows. Our big running game comes out when other teams are wore down.”

Myers and the Oredigger defense is the reason those offensive lineman got to have so much fun.

“We just came out and played. Everyone did their job,” said Myers, who was named Player of the Game after registering 10 total tackles, four tackles for a loss and two sacks. “It was an all-around team win. Everyone was doing their job every play, and that’s what happens. They didn’t put up any touchdowns on us.”

“It’s a team win all around. The offense pounded the ball at the end; it’s just awesome.”

The Orediggers got big plays when they needed them, and Tech was able to bounce back from several potential game-changing situations.

The first near disaster came when the Oredigger defense forced a Western punt early in the game. Tech fumbled the kick, and Western junior linebacker Kyle Schulte, a Butte Central graduate, recovered at the Oredigger 13-yard line.

Four plays later, though, the Bulldogs had to settle for a 24-yard field goal by Mark Kharchenko.

The Oredigger offense then responded by marching 86 yards on eight plays to take the lead for good at 7-3. Sophomore quarterback Jet Campbell, who hit classmate Trevor Hoffman on a 49-yard pass to start the drive, capped the drive with a 6-yard run.

Western used an Oredigger miscue to cut the lead to 7-5 with 40 seconds left in the first quarter. Campbell was whistled for intentional grounding in the end zone, resulting in a safety.

The Orediggers took a 14-5 lead into halftime after Folkes scored on a 4-yard run on third and goal, but the Bulldogs appeared to take the momentum early in the third quarter.

Former Dillon Beaver Carson Hritsco picked off a Campbell pass and returned it 47 yards for a touchdown to cut the lead to 14-12 just 1 minute, 14 seconds into the second half.

Campbell and the Oredigger offense, however, had an answer. The former Billings Central Ram hit Hoffman over the middle for a 43-yard touchdown to cap an eight-play 75-yard counter punch.

Morrell, who is in his ninth year coaching the Orediggers, said his team was preparing for such responses. He said the Orediggers learned their lesson with two heartbreaking losses to the Bulldogs in Dillon the last two seasons.

“We knew they were going to be able to make some plays,” Morrell said. “I told our guys, ‘Don’t ride the roller-coaster.’ That was our theme all week. We’ve been into that situation the last two years where up and down and up and down all the time. I said, ‘Hey, if they make a play, dust it off.’ I was really proud of how the guys handled that situation. You wouldn’t have known they had a pick-6 on us. They just bounced right back and went down and scored.”

That touchdown made it a 21-12 lead, and the Oredigger defensive unit and offensive line took it from there. The two TDs from Counts, a former Kalispell Flathead Brave, served as the final dagger.

“Our offensive line is a solid unit,” Morrell said. “They kept grinding. I thought our backs had a great night, and Jet did a great job hitting some big plays.”

Benz said the offensive line’s big finish was the product of hard work in the offseason, coaches putting the players in the right place and really good teammates.

“It’s part of being one unit, five guys playing as one,” Benz said. “When we get clicking, we’ve got a lot of good athletes in the backfield behind us. If we do our job and stick to the scheme, big holes are there. And we have the guys behind us to make the plays.”

Western entered the game as one of the top offensive teams in the Frontier. The Bulldogs left town with just 87 yards passing and 63 yards rushing.

Arthur Flynn added six tackles, a tackle for a loss and a sack in the win. Justin May got in on four tackles, while Tucker Rauthe and Ike Schweikert each got in on four.

May and Matthew Drake broke up two passes, while Myers broke up one.

“We just have really good team chemistry,” Myers said. “It’s fun. We have fun out there. I don’t know if you guys can tell, but we love playing with each other. We love going around hitting people and just playing defense.”

Morrell pointed to the play of Myers, whose No. 48 stood out to fans on both sides of the rivalry.

“He’s a fifth-year senior,” said Morrell, who is also the defensive coordinator for the Orediggers. “I’m really blessed to have three fifth-year senior linebackers starting right now. It doesn’t happen very often. Man, we lean on those guys, Jake Clark, Ike Schweikert and Carter. They’re our heartbeat on defense. It’s just so nice when you got that veteran presence in there. It really makes it hard for anybody to get anything by us.”

Campbell completed 8 of 16 passes for 159 yards. Hoffman grabbed five receptions for 120 yards and the score.

“I think Trevor is one of the elite receivers in the league,” Morrell said. “There’s no doubt he’s right at the top. We have a pretty good secondary. We can’t cover him in practice. I think everybody else is going to have a hard time covering him, too.”

Western will look for the season sweep of Carroll College next week in Helena. The Orediggers, meanwhile, head to Caldwell, Idaho, to try to avenge their lone loss of the season.

Myers said Saturday’s prime-time win was a big step in bouncing back from that loss in the home opener.

“We started off a little rocky on the season. We just want to keep climbing the rest of the season,” the Cody, Wyoming, native said. “This was a huge, huge win for us to see how we compete against other good teams in the conference. They’re a good team. You can’t take anything away from them. We just played our game and did what we had to do.”

Morrell added that the victory shows that the Orediggers are ready for a run as they head to the final five games of the season.

“It was an awesome win. Our guys have been working so hard over the course of two weeks to get ready for this game,” the coach said. “Western is a heck of a ball club, and we knew we had to come out and play our ‘A’ game. I think we’re finding out right now that we’re firing on all cylinders — offense, defense and special teams. We’ve got a great football team.”