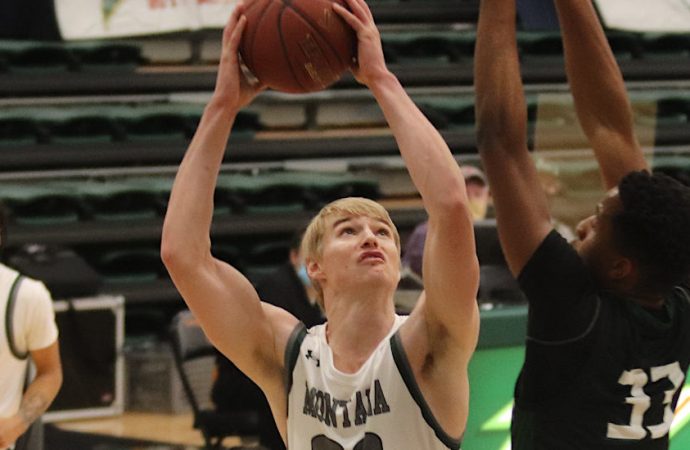 Montana Tech’s men’s basketball team was all smiles as the Oredigger rolled to an 84-63 Frontier Conference win over Rocky Mountain College Saturday night at the HPER Complex. (Stats)

One very big reason for that was Cody Baumstarck.

The 6-foot-8 senior from Worland, Wyoming had his best game as an Oredigger, scoring 19 points and pulling down 10 rebounds as Tech bounced back from losing back-to-back home games to the University of Providence on Monday and Tuesday.

“I’m really proud of him,” Oredigger coach Adam Hiatt said of Baumstarck. “We’ve been talking to him about being much more aggressive and assertive around the rim. I thought he was tonight. He imposed his will.”

“Taylor is a huge part of our team,” Baumstarck said. “Without Taylor, we’ve got to step up.”

Step up is an understatement.

On the night, Baumstarck shot 9 for 9 from the field. His only stumbling block was that he shot an uncharacteristic 1 for 7 from the free throw line.

“Coach told us before the game that we needed a bigger post performance. That was a big goal,” Baumstarck said. “My teammates were finding me down low.”

“We were working with him in the absence of Taylor,” Hiatt said of Baumstarck. “He grasped some of those concepts tonight, and I’m really proud of his effort.”

Baumstarck was not the only reason for the Orediggers to smile, either. 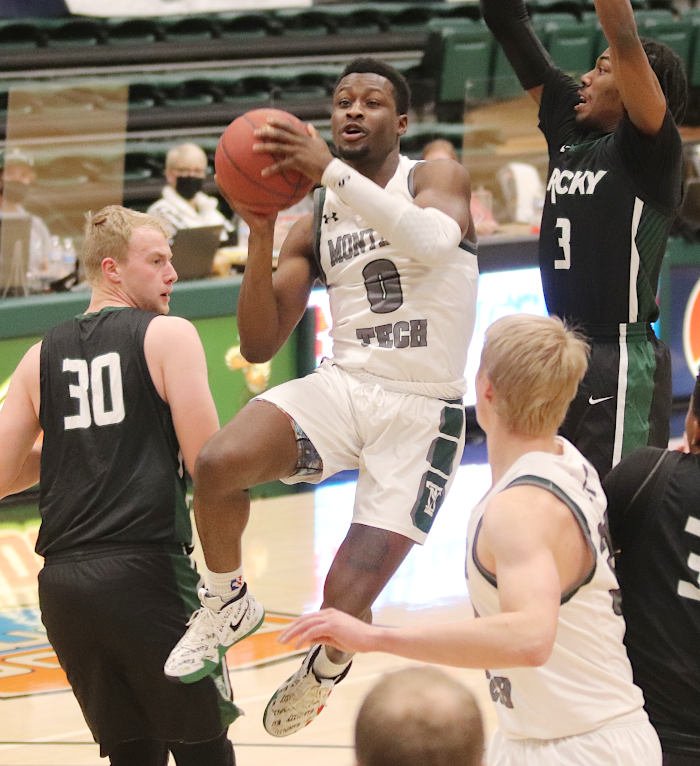 Star Sindou Diallo had another night that could only be characterized as “Sindou being Sindou.” The senior guard scored 17 points, grabbed eight boards and dished out three assists.

Diallo’s night included a couple of dunks that certainly would have electrified the crowd, had a crowd been allowed to attend. They certainly electrified his Oredigger teammates.

Like with Baumstarck, Diallo spent the latter part of the game on the bench.

Diallo was also a force on the other end of the court.

“He just brought a great defensive mindset tonight,” Hiatt said. “That was the key tonight. We just wanted to play with much more energy defensively. Three out of our last four games, we gave up 80 or more points, and that’s just not who we are. We didn’t have a great enough focus on that end of the floor. That’s been our emphasis these last few days in practice and leading up to our shoot around today.”

Larson started in place of England and once again more than held his own. Hiatt said the confidence Larson and Baumstarck gain in England’s absence will only serve to make the Orediggers stronger when he returns.

Baumstarck agrees with his coach.

“Once we get Taylor back, we should be unstoppable down low with Bridger, me and Taylor,” he said. “It should be a good deal.”

The teams play again at 4 p.m. Sunday, and Hiatt cautioned that it could be a very different game when they see the Bears again.

Baumstarck pointed out that the Bears flipped the switch last week against Montana Western in Billings. Western won 73-64 on Saturday, only to see Rocky battle back and win 83-59 on Sunday.

“They lost to Western last week and then beat them by almost 30,” Baumstarck said. “We’ve got to come ready.”