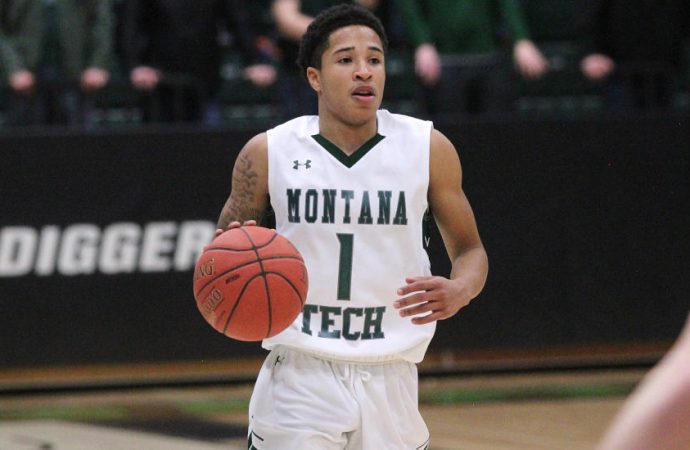 The Montana Tech men’s basketball team just might have found a corner piece of the puzzle Tuesday night.

Sophomore point guard Nate Ward had perhaps his best game as an Oredigger, scoring 19 points to lead Tech to an 84-68 win over Montana Western in a Frontier Conference game at the HPER Complex. (Stats)

The University Place, Washington, native scored 14 of his points in the first half. He dished out four assists, collected two steals and did not commit a turnovers.

That is what had Oredigger coach Adam Hiatt particularly pleased after his team upped its record to 15-8 overall and 5-6 in league play.

“He’s a tremendous point guard,” Hiatt said of Ward. “He’s great defensively. He passes the ball well. He controls the game. The one piece that has been missing is consistent perimeter shooting. He was able to solve that puzzle tonight.

“If it continues, we’re going to be a really good team.”

Ward, who has been limited to 17 games by multiple injuries, including a concussion, said it was a matter of confidence and being comfortable.

“I’ve been struggling early in the season,” he said. “Coach has been telling me, ‘Keep being confident, keeping shooting it and it will eventually fall,’ and that’s what happened.” 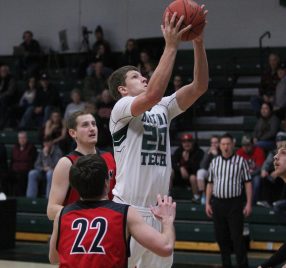 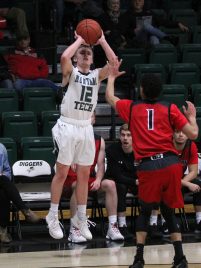 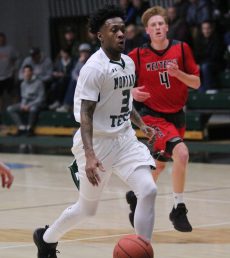 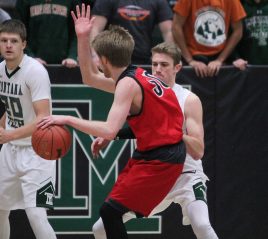 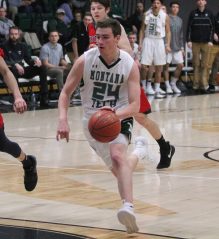 When the Bulldogs, who were looking to snap a seven-game losing streak, were giving the Orediggers all they could handle, and then some, it was Ward who gave the Orediggers a shot in the arm.

He took a pass from Blake Dittman and sank a 3-pointer to break a 26-all tie with 5 minutes left in the first half.

The next time down court extended the lead to 31-26 with a bucket.

Ward then fed Taylor England for a 3-pointer to extend the lead to 34-26, and the Orediggers were off to the races.

Tech led 44-31 at halftime, and the Orediggers led by as many as 20 points three times in the second half.

The scrappy Western team, though, made sure that lead wasn’t quite as comfortable as the score might indicate.

“Every game that we’ve watched them play this year, they have battled to the very end,” Hiatt said of the Bulldogs, who are playing under first-year head coach Mike Larsen. “They’ve had several games where they faced huge deficits at halftime, and they cut it down to competitive margins by the end.

“We weren’t a bit surprised that they were going to fight until the very end. That’s kind of who they are.”

Cedric Boone and Kooper Kidgell each scored 10 point to pace the Bulldogs (7-15, 1-10). Kidgell also grabbed seven rebounds for the Bulldogs, who got nine points from Tanner Haverfield and eight from fellow Dillon native Troy Scott.

Ward was one of four Orediggers to reach double figures.

Troy Owens Jr., who was limited by foul trouble, and Taylor England each scored 13 points, and Dylan Pannabecker scored 12 points before fouling out. Owens also pulled down six rebounds and handed out five assists.

“We had spurts where we played really well,” Hiatt said. “We had guys step up tonight who have been struggling.”

The win came just three nights after the Orediggers dropped a tough home game to MSU-Northern.

“I was really proud of our guys’ effort,” Hiatt said. “We had a tough offensive night on Saturday. We didn’t play very well. We came back and made some shots tonight, and we played with a lot more confidence.”

The tough stretch of the schedule continues Thursday when the Orediggers play Lewis-Clark State College in Lewiston, Idaho.

Montana Western will play at Lewiston on Saturday.

The Orediggers leave Wednesday for their fourth game in seven days. Tech will play its next four games away from home. The Orediggers next game on the Kelvin Sampson Court is Feb. 16 against Lewis-Clark State.