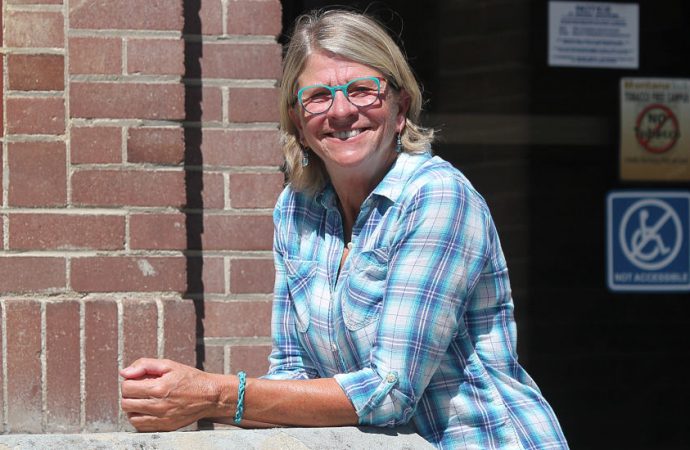 Former Montana Tech women's basketball and volleyball coach Jo Buysse stands outside the Science and Engineering Building this week. Buysse's office was on the first floor of the building, then the HPER Complex, when she started working at Tech.

Jo Buysse was anything but content to be the first full-time volleyball and women’s basketball coach at Montana Tech.

In fact, it didn’t take the Buysse long to threaten a lawsuit against the school she worked for. Buysse was going to make sure the women players and coaches would be treated as well as the men.

“We had to fight,” Buysse said. “I threatened a lawsuit for equal pay and equal resources for men’s and women’s basketball. Basketball is the same. We traveled to the same places, we eat the same foods, why are we getting less than the men?”

Buysse and the Tech women had to persevere over the attitude that the women should simply be glad they had a team at all.

“After several negotiation periods with president (Fred) DeMoney, I think we made some progress,” Buysse said.

Nearly four decades after Buysse first came to Butte from Minnesota as a 25-year-old in 1979, she is still very much in fighting mode. Buysse, who recently came to Southwest Montana for a couple of weeks of vacation, is still always battling for what she believes is right.

“She had to fight all her life,” said Mavis (Mollberg) Bentley, who moved to Butte from Minnesota to play for Buysse’s Orediggers. “She had to fight for women’s rights, for gay rights. She’s always fighting for equality.”

As a professor and researcher at the University of Minnesota’s School of Kinesiology, where she just finished her 20th year, Buysse teaches a lot of sport sociology, gender in sport and international sport.

“A lot of my teaching focuses around social justice issues, both nationally and internationally,” Buysse said. “My research is focused primarily on media and how girls and women in sports don’t get the same kind of coverage as men. They get 4 to 6 percent of all sports coverage nationally.”

After leaving Montana Tech in the late 1980s to get her PhD in Minnesota, one of her first projects was to analyze cover photos for media guides from colleges around the country.

“What has been portrayed, what was in the 1990 study and the 1997 study, is that overwhelmingly men were portrayed in action on the court in uniform,” Buysse said. “Women were off the court, in dresses, and all frilly.”

She pointed to the 1990 media guide for the 1990 University of Mississippi women’s basketball team.

“The women’s basketball team was in front of a mansion,” Buysse said. “There was a black limousine, and the coach was in a tux sitting in front of the limousine. All the women were in like formal gowns.”

That might seem funny, today, but Buysse is not laughing.

“Follow up studies have shown similar things,” she said before pointing out the perception pushed on the women student-athletes. “You can be an athlete, but you are a female — and you are a feminine female — first.”

“Your average person doesn’t see the Para Olympic Games or even know that they exist,” she said. 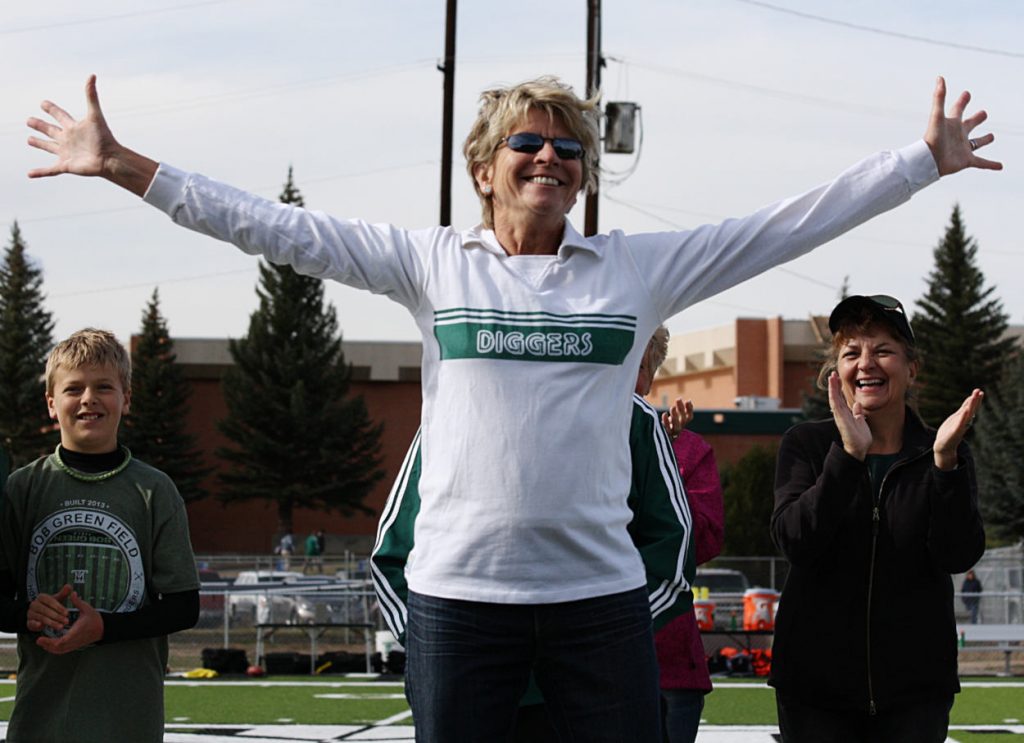 Jo Buysse has a little fun with the crowd while being introduced with Digger Athletics Hall of Fame Class of 2013 at halftime of a football game.

A pioneer and then some

While she deflects any mention of being a “pioneer” in women’s sports in Butte to the late Peggy Sarsfield, Buysse definitely moved mountains as the coach of the two programs at Montana Tech.

In 1981, Buysse led the Oredigger volleyball team to the Frontier Conference crown. That led to a run of five titles in two sports in a span of less than three seasons for the Montana Tech women.

The Oredigger women’s basketball team went from winning three games in Buysse’s first season to taking home the Frontier Conference title in 1982. It was the first basketball title at the school since the then Montana School of Mines Orediggers won the men’s league crown in 1947.

To former players like Bentley and Shelly (Linz) Davis, Buysse is so much more than a coach. Buysse recruited both to the Mining City, where they still live today.

Bentley, whose father passed away when she was 16, said Buysse was almost like a parent to her.

“She was a great role model when I really needed one,” said Bentley, who last year retired after a two-decade run as the head coach of the Butte High tennis program. She still competes at a high level in tennis.

“Jo is the reason I came to Butte and Montana Tech,” Davis said. “It is where I met my husband, Ron Davis. The rest is history.”

Shelly Davis was looking at colleges in Minnesota and North Dakota when she heard from Buysse.

“When I received the call from Jo telling me about the sports programs at Montana Tech, I was intrigued, after a short time, I signed to play both volleyball and basketball,” she said. “Jo was a tough coach and set high expectations, which made us a great team. She taught us to be tough competitors and to never give up.  I have so many fond memories of games, practices and teammates.  I thank Jo for the opportunity she gave me at Montana Tech.” 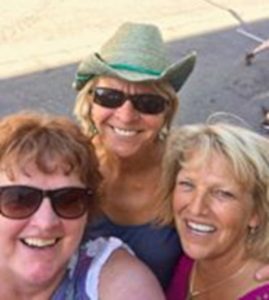 Buysse admits that taking over two sports at such a young age was not an easy thing to do. Coaching both sports at the same time in this day and age is unheard of.

“It was very scary,” she said. “Thankfully, I office’d with Peggy Sarsfield. She was the director of health, and physical education at the time. Between her and (assistant coach) Shirley Turley, they kind of calmed me and convinced me to stay. I was ready to leave after year one. It was tough.”

Some quality time at the Vu Villa also helped.

“I was young and not so bright as a young coach,” Buysse said with a laugh. “But I learned a lot along the way. I spent a little bit of time at the Vu. Mick Delaney (a former Montana Tech athletic director and bar owner) would try to calm me.

“I lived too close to the Vu. I only lived two blocks away. That was the problem.” 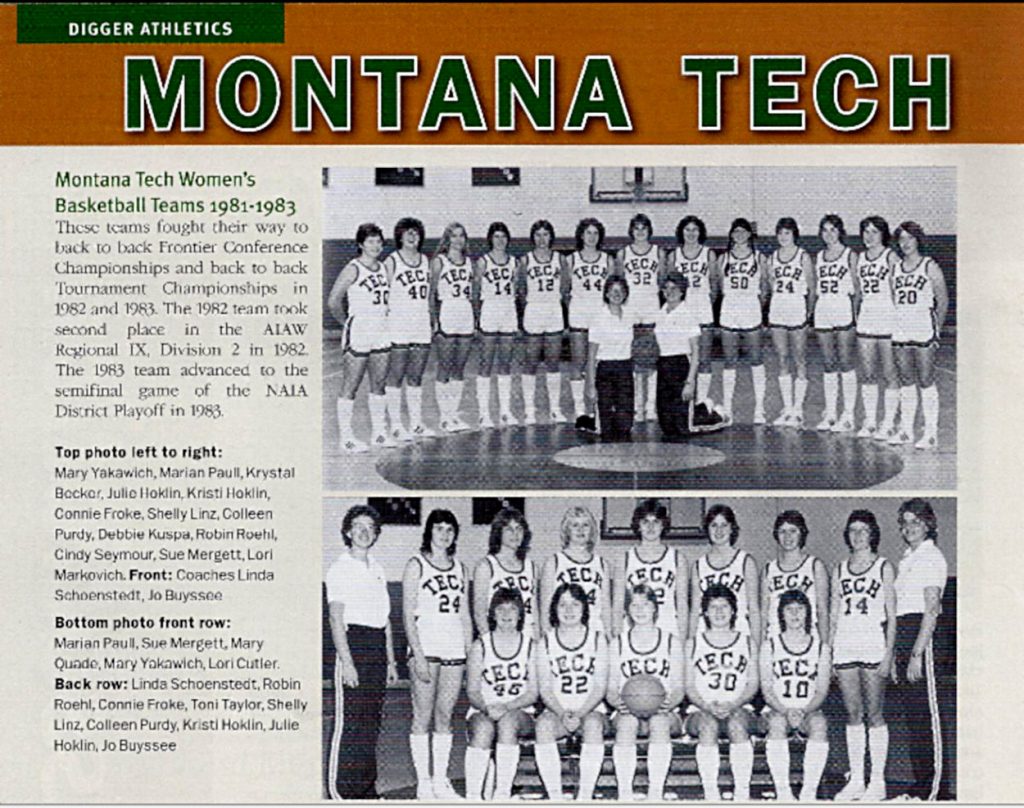 In volleyball, another problem was the lack of players who knew the game. The program was being built from scratch, and Montana did not have high school volleyball at the time.

A great deal of the players were basketball players who were doubling up sports. Many had to be taught the game of volleyball they were playing for the first time.

Like it does now, basketball season starts when volleyball season is heading into crunch time, making for a very busy October.

“Those athletes overlapped,” Buysse said. “They had double practices. We went at 6 in the morning for basketball, and we went in the afternoon for volleyball.

College coaches usually do not have to teach the game to their players. Buysse did.

“The Hoklin sisters (Julie and Kristi) had never played volleyball, and they became two of the best players we had,” Buysse said. “Mary Yakawich, I don’t think she played volleyball at Butte Central, and she was an amazing setter for us.”

After leaving to earn her PhD, Buysse coached for seven years at Hamline University in Saint Paul. She also served as athletic director for women at the school.

A former marathon runner, Buysse stays very active. Whether it is hiking, speed skating or playing basketball, she is always on the move.

“‘Keep moving’ is my motto,” she said. “I play basketball in the park. I love basketball. I go across the street to the park and shoot. I play soccer with the kids. I ski. I do a lot of things.”

That is very impressive considering Buysse has been battling multiple sclerosis for more than 20 years.

“I was running a marathon in Belgium,” Buysse explained. “I had always done 3:20 to 3:30, and my legs just got so heavy that I could barely lift them. I just thought, ‘Oh, it was jet leg.’ Then I got home and I started drooling because my face was numb.”

When first inflicted with the disease that attacks the central nervous system, Buysse was nearly defeated.

“When I first got it, I would make one side of the bed, and lie down, and then make the rest,” she said. “I was ready to move into a one-level home, was thinking I might have to quit my job, everything. Then I went on the medication, and I am so lucky.”

“I’m lucky I could afford the medication. I had good health insurance. Oh, the medicine, oh my God.”

Buysse turned to skating when she could no longer run the marathons, half marathons and 10Ks she loved so much.

Buysse recently broke her wrist curling, and her doctor advised her to give up skating for a while. The medicine for MS could possibly play a factor in weakening her bones, she said.

So Buysse traded in her speed skates for her hockey skates. For now.

“I’m still skating, but not on my speed skates,” she said. “I’m not supposed to be skating. It’s been two years since I speed skated, but I think I’ll do it again. They’re worried about me falling.’

Always willing to learn something new, Buysse has long been a world traveler.

“When I was 18, I started traveling internationally,” Buysse said. “I learned so much that when I started teaching at the University of Minnesota, I led student trips to other countries. I’ve taken students to Greece, Sweden, Finland, Italy, Switzerland, about six or seven trips.” 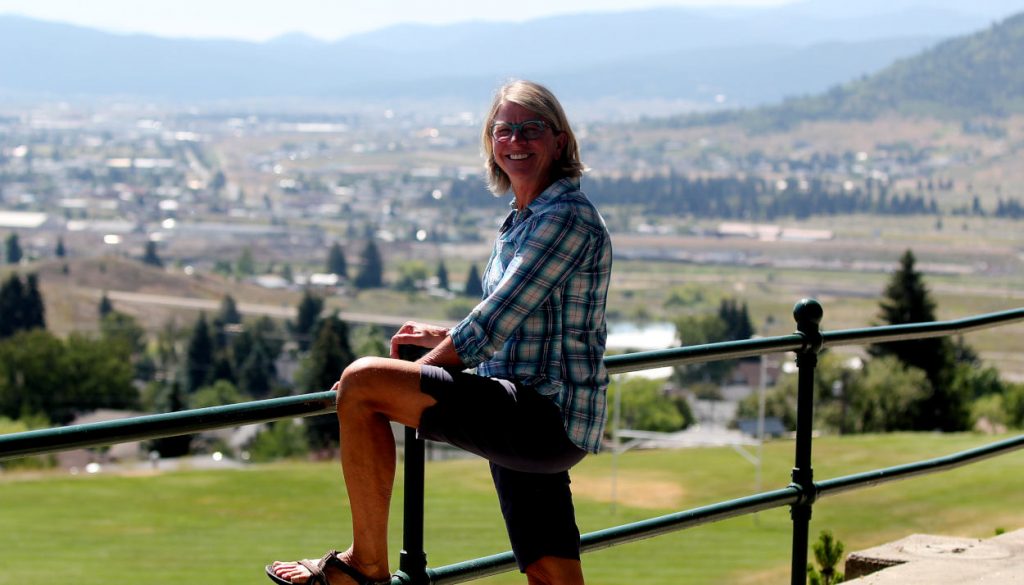 Jo Buysse visits the Mining City at least once a year.

Buysse looks back on her days as an Oredigger fondly.

“My start here at Montana Tech was really good,” she said.  “I had some good mentors and some good leaders, and that helped propel me forward.”

The coach also takes pride in the student-athletes whose lives she touched.

“I don’t think we had a grade-point below 3.3 in basketball,” Buysse said, speaking of the team’s cumulative grade-point average. “In volleyball it might have been 3.1. There’s so many success stories. Jamie Connell is the head of BLM now or something.”

“They’re all so amazing,” Buysse said of her players.

Buysse comes back to the Mining City at least once a year, usually more. She has not missed a Folk Festival.

“I come every summer to go out camping in the wilderness. Actually, it’s a log cabin, but it has no running water, no electricity and no cellphone service,” she said. “I’ve been going there since 1979. It was originally Peggy and George Sarsfield’s cabin.”

This coming school year will be Buysse’s 42nd as a teacher. It is likely also her last. She said thoughts of her impending retirement are bitter-sweet.

Retirement will allow Buysse to spend even more time with Maggie Kubak, her partner of 30 years. More than likely, she will also use that time to keep on fighting the good fight.

After all, Jo Buysse has and always will be a fighter.

“I can’t complain about anything,” she said. “Life is good. It took a while to find myself, but I did.” 1 comment