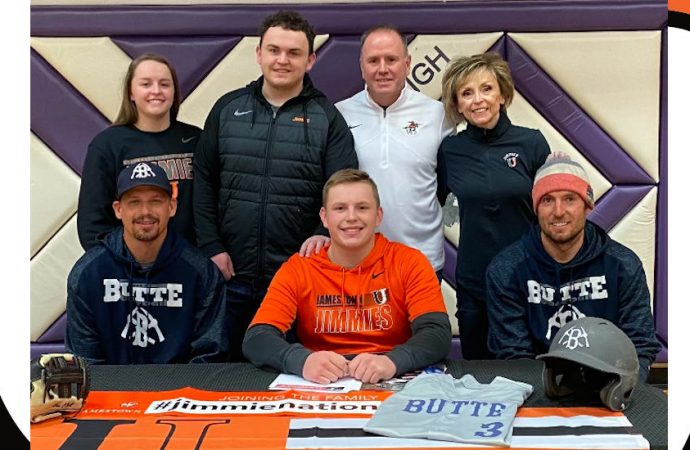 Kian O’Neill poses for a photo after signing with the University of Jamestown baseball team Wednesday at the Richardson Gym. He is sitting between Butte Miners head coach, Jeff LeProwse, left, and assistant coach Brad Rutherford. O’Neill’s family stands behind him. They are, from left, McKenzee, Cade, Jim and Traci. (Courtesy photo)

Kian O’Neill is officially a Jimmy.

The Butte High senior signed an NAIA National Letter of Intent o play baseball at the University of Jamestown Wednesday afternoon in a short ceremony at Butte High’s Richardson Gym.

O’Neill committed to the North Dakota school early this month.

The signing comes after O’Neill helped lead the Butte Miners to their best season in recent memory. O’Neill earned all-conference honors after batting .330. He also played a stellar third base for a Butte team that finished the season at 28-16.

Butte went 24-8 against Southern A teams, and that includes a win at the Southern A tournament in Three Forks.

Jamestown has a highly-successful team in the Great Plains Athletic Conference for 22-year head coach Tom Hager. After going 35-18 and winning the GPAC postseason tournament, the Jimmies went 18-5 before the coronavirus suspended the 2020 season.

O’Neill is the son of Jim and Traci O’Neill. He is the youngest of three in the family. His sister McKenzee and brother Cade were also successful athletes at Butte High.