That is how then Montana Tech football coach Bob Green described every day. He closed out his outgoing voicemail message by saying so.

This day, though, really was one of those great days the coach always dreamed about.

Yes, it seemed this day was a great day to be an Oredigger, indeed. Only it turned out to be anything but.

One of the screaming Oredigger fans at Alumni Coliseum that beautiful fall Saturday afternoon was 14-year-old Mariah McCarthy. She loved her Orediggers.

After the game, her father, Leo, drove Mariah to Silver Bow Pizza to celebrate with friends. He gave her some money, along with a hug and a kiss on her forehead as he said goodbye.

In his book, “One October Night,” which was released last week, Leo details the death of Mariah, who was run over by a truck with an underage drunk driver behind the wheel.

Leo’s book shows how he, his wife, Janice, and oldest daughter, Jenna, somehow kept on living despite the unimaginable sadness.

Just before midnight, Mariah and two friends were hit from behind after walking some friends halfway home on a walking trail. Mariah was pronounced dead the next day in a hospital in Missoula. 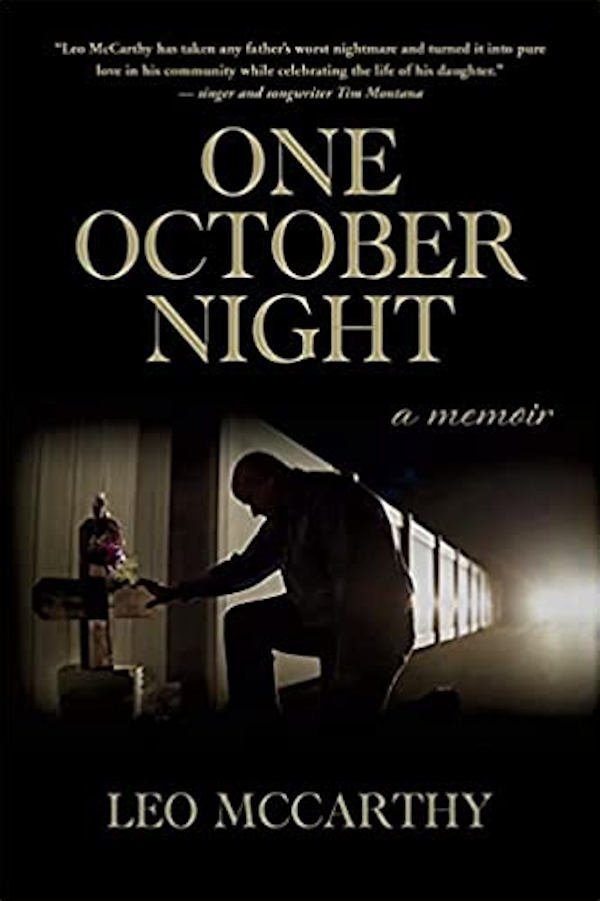 In his book, Leo walks us through the decision to take Mariah off life support and donate her organs.

“Maria’s liver allowed a little girl to become a big girl,” Leo writes. “One of her kidneys went to a man who was able to go home to his family. Her other kidney went to a fourteen-year-old girl. Her hazel green eyes let others see the rising and setting of the sun.”

Leo describes the aftermath of legal failures and the outrage brought on by a defendant who did not even ask for forgiveness.

Most of all, Leo introduces the readers to Mariah.

It is a name that the youth of today know well. They see the banner of “Mariah’s Challenge,” and one day many of them will apply for the scholarship.

But to them, the death of Mariah McCarthy is so far in the past. They know the horror, but they could not possibly remember the pain.

To them, it is as distant as the Sept. 11 terrorist attacks or even Pearl Harbor.

“One October Night” is a terrific tribute to Mariah. It is a tribute to Janice and Jenna and to Leo himself. Together the three took the pain of the tragedy and turned it into love for their community and beyond.

They formed “Mariah’s Challenge,” a movement that has given out hundreds of thousands of dollars to high school seniors who have lived by the ideals of the cause — don’t drink while underage and never drive drunk.

The McCarthy family helped change, if even ever so slightly, a culture that accepted drinking and driving as something we all just did. They used their suffering to save lives so that other families do not have to go through what they have, and still are going through.

This book refreshens the memory of those who lived through those sad days, and it breaks through the “generational amnesia” for those who did not. It should be required reading for high school students in Butte and beyond.

In its pages, Mariah will live forever, but not just as an example of the horrible things that can happen to good people. Her father’s book tells of the girl who did not follow the crowd. She and her friends started their own.

It tells of the girl who would begin decorating for Christmas obscenely early. It shows the girl who idolized her big sister. She loved bowling and writing in her journal.

She did not make the freshman volleyball team at Butte High, but she planned to try again as a sophomore.

“She was the thoughtful counselor, the negotiator, and the energetic weekend planner for her circle of friends,” Leo writes.

The book brings to life the little girl who used to pepper her dad with questions as she drove around town with a father running errands.

One day, Mariah said, “Daddy, who knows me?”

It is a loaded question that I have not been able to stop thinking about since I read the book in one sitting.

It is a question that seems so relevant now.

Mariah’s friends and family certainly know her. They wonder what might have been had that underage drunk driver not made such a horrible decision.

The town knows Mariah’s name. Old people know it, and thanks to “Mariah’s Challenge,” so do young people.

But do they really know her?

I used to see Mariah at games with her dad, but I never really met her. After reading the book, I feel as if I have.

Even before the book, I knew that Mariah will forever be one of the most influential people in my life.

When that tragedy hit, I looked in the mirror and realized that I needed to be a better person for my wife and kids. My wife was about to give birth to our son, Grady, and I wanted to be a father he and his sister Delaney, who was 4 at the time, could be proud of.

I never thought I had a drinking problem, but I realized I often had a problem when I drank. One was too many and 12 was never enough.

That sometimes led to driving home when I should have called for a ride.

So, one day at lunch, I had a talk with my daughter. I promised her that I would give up drinking for good, and I did.

Seeing Leo give a eulogy that comforted a heartbroken community — a community that did not know how it could possibly begin to comfort him — inspired me to believe that I could do it. I have not touched a drop of alcohol since.

My last drink came after I went out for a few beers following the shift in which I wrote the newspaper story about Tech’s 28-21 win over Western.

A few minutes after I walked out of the newsroom, an emergency call came over the scanner. The ambulances rushed to Mariah, Valarie and Kaitlyn. The police scattered to find the driver.

Little did I know it then, but that decision to quit drinking saved my marriage. I was on a crash course with becoming a divorced father of two.

Instead, I am a married father of three. Maizee was born two years and two months after my last drink.

She would not be here if I did not make that decision. Since Mariah helped me quit, I cannot help but think that Maizee is here because of Mariah.

Maizee is an amazing little girl with a kind heart. She is a fantastic artist and a deep thinker. She still peppers me with questions that I usually do not have the answers to.

She is just so much fun to be around.

I have told her the story of Mariah many times. One day, when she is a little older, she will probably realize the magnitude of it.

She will see the importance Mariah has played in her story.

When that day comes, I will give her a copy of Leo’s book. Then she will flip through the pages and Leo will introduce her to Mariah.

Now that will be a great day to be an Oredigger.

— Bill Foley writes a column that appears Tuesdays on ButteSports.com. Email him at foley@buttesports.com. Follow him at twitter.com/Foles74. 1 comment