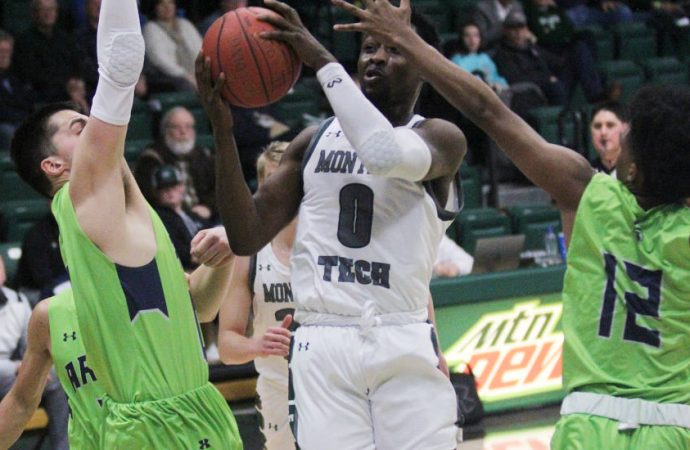 It didn’t take Montana Tech men’s basketball coach Adam Hiatt to point to the reason his Orediggers fell 76-71 to No. 8 University of Providence Thursday night at the HPER Complex. (Stats)

Tech gave the Argonauts (16-1, 4-1) a run for their money, but couldn’t capitalize when opportunities presented themselves in the second half.

“We obviously didn’t play very well offensively in the second half,” Hiatt said. “We did not expect to shoot 2 for 21 from the 3-point line in our own gym. That caught us by surprise.”

The poor shooting performance was puzzling for Hiatt, especially since it came at Tech’s home gym.

“We’re trying to figure that piece out and understand why it is that we’re not picking up our game here at home. When I’m able to solve that puzzle, our team will be in a better position.”

Montana Western transfer Zaccheus Darko-Kelly, whom Hiatt called “one of the best players in the league,” scored 18 points to lead four Argonauts in double figures scoring in a game that saw Providence for one brief moment.

The Argos led by as much as seven points (24-17) before taking a 39-36 advantage into halftime. The game saw just three ties and two lead changes.

After a Taylor England bucket tied the game at 48, Oredigger Sindou Diallo hit a pair of free throws to put the Orediggers up 50-48 with 13 minutes, 7 second left in the game.

Darko-Kelly answered with a 3-pointer to put the Argos back on top for good.

Providence led by as many as nine points twice before holding on for the win.

“We did everything we could do to win the game,” Hiatt said. “We defended really well. We turned them over 18 times. We were plus five with turnovers. We could have rebounded a little bit better. It just largely came down to our inability to make an open shot.”

“Hopefully we can change that moving forward and we can shoot with a little more confidence.”

England scored 21 points to go along with seven rebounds, while Diallo scored 20 and grabbed eight boards to lead the Orediggers (10-6, 2-3).

Troy Owens Jr. added 12 points for the Orediggers, while Dylan Pannabecker contributed with 10. The Orediggers also got four points from Drew Huse and two apiece from Connor Kieckbusch and Cody Baumstarck.

Hiatt said his Orediggers are upbeat after the victory. They are already focusing on Saturday’s battle with MSU-Northern at the HPER.

“We’re not discouraged,” the coach said. “We feel like this was a winnable game that we simply let go because of our inability to make some open shots. In the Frontier Conference, the team that makes the most open shots is the team that is going to win.”