No. 2 Bulldogs rout Bruins to run record to 6-0 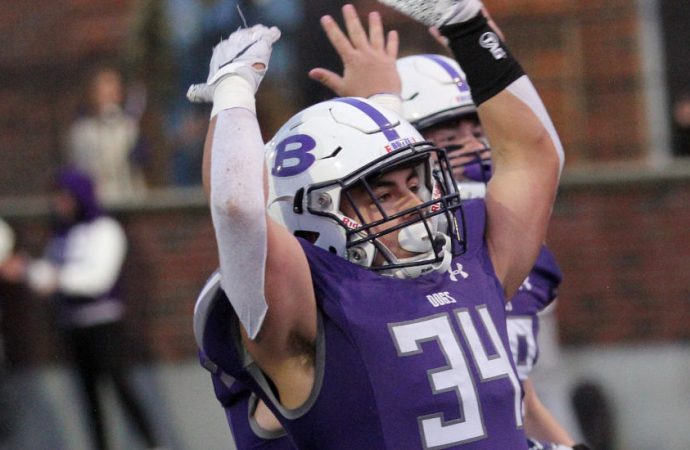 The Bulldogs jumped out to a 35-3 halftime lead, and Butte High held on for a 56-38 Western AA win over Helena Capital in front of a large-and-rowdy crowd at Naranche Stadium. (Stats)

The homecoming victory stopped a four-game losing streak to the Bruins and was just the eighth Butte High win over Helena Capital in 28 meetings dating back to 1980.

Also, the victory lifted the Bulldogs to 6-0 for the first time since the state championship season of 1991.

After singing their fight song to their fans, however, the Bulldogs immediately turned their attention to next week’s opponent. Kalispell Flathead will come to town to take on the Bulldogs on Silver B’s Night. 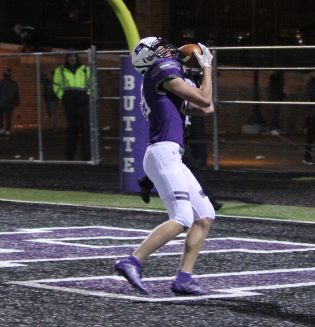 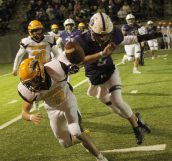 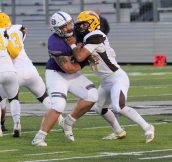 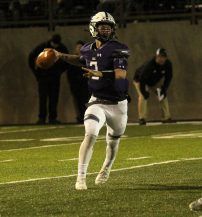 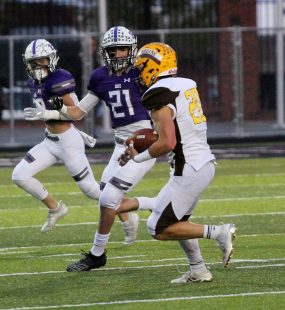 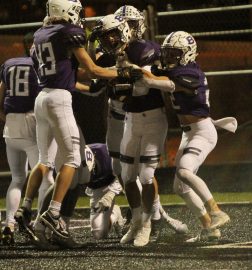 Dawson Roesti is mobbed by teammates Aidan Pezdark (43), Scout Allen (22) and Tanner Huff (behind) after recovering a fumbled snap on a punt for a touchdown. (Bill Foley photo) 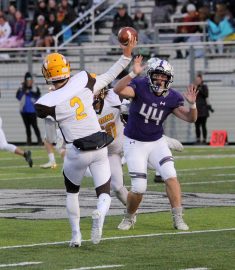 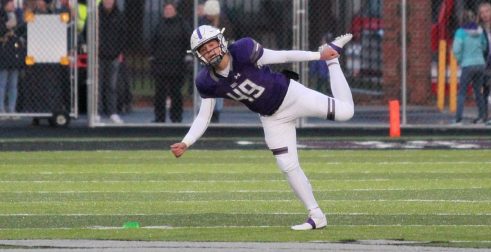 “It feels good, but we’re onto next week,” said Butte High senior running back Kameron Moreno, who ran for 132 yards and two touchdowns. “We can’t stay complacent with this. The coach said we’ve got to stay hungry all the time.”

Moreno was following the words of his head coach, Arie Grey, who sometimes sounds like he’s coaching the New England Patriots.

“We’re just happy where we’re at right now,” Grey said. “We’ll enjoy this, but we know we’re on to Flathead, and it’s ready to roll.”

Grey said the Bulldogs will turn the page and focus on what he called “teachable moments.”

Most of those moments came in the second half — and after Josh Nelson and Sydney Doyle were named Homecoming King and Queen.

Capital outscored the Bulldogs 35-21 after the break. The Bruins hit on some big plays and recovered an onside kick.

Thanks to a running attack that was led by lineman Konnor McClafferty, Ty Raiha, Timothy Hollingsworth, Lucas Kingston and D.J. Jackson, the Bulldog running game made sure the victory was never really in doubt.

“We ran the ball well with our running backs and our QB running game, and then threw the ball effectively when we needed to,” Grey said. “Our kids still got some big stops and we had some big drives in the second half. We were able to run the ball physically all night long, which is something we have to be able to do.”

Mellott, who passed for 201 yards and two touchdowns, hit Quinn Sullivan over the middle for a 62-yard gain to the Capital 18-yard line.

Four plays later, senior quarterback Tommy Mellott recovered a fumbled snap and busted into the end zone on a 1-yard run. The score came after Kameron Moreno ran seven yards to the 1-yard line. He just wouldn’t go down on the play that looed more like a rugby scrum.

Capital answered on its first possession, and Ryan Quinn booted a 30-yard field goal to cut the Butte lead to 7-3.

The Bulldog offense didn’t hum quit like it has most of the season, and the passing game hit on just 10 of 22 passes.

But when the Bulldogs start to roll, they really start to roll. Butte High scored 21 points in the final 7 minutes, 28 seconds of the second quarter.

Mellott started things by busting lose for a 31-yard run. It was another one of those runs where the future Montana State Bobcat looks like he was shot out of a cannon.

Butte High got another quick stop to force a punt, and disaster struck for the Bruins. Dawson Roesti recovered a fumbled snap in the end zone for a touchdown just 23 second before halftime.

While the Bulldogs played probably their best defensive half to open the game, the Bruins kept things interesting in the second.

Grey pointed to the amount of time the defensive unit is on the field thanks to Butte High’s quick-strike offense.

“Our defense was lights out in the first half,” Grey said. “They did a great job getting off the field, playing fast, playing physical. Our defense, they’re tough. They play a lot of football. I don’t think people realize how much they get to play.”

Capital quarterback Bridger Grovom capped the Bruins’ first drive of the second half with a 7-yard touchdown run.

Kobe Moreno answered with a 2-yard run before Noah Braden found pay dirt on a 1-yard plunge for the Bruins late in the third.

Grovom scored on a 6-yard run before hitting Cy Miller for 43 yards to pull the Butte High lead to 49-31.

Kameron Moreno made it 56-31 on a 22-yard run in which he ran through a handful of would-be tacklers.

Grovom hit Parker Johnson for an 8-yard pass with 9 seconds left in the game.

“They’re physical, and they played hard tonight,” Kameron Moreno said, adding that Capital is the team he wants to beat more than any other opponent. “That’s why I hate playing Capital. They never quit.”

Grovom passed for 359 yards for the Bruins, who also racked up 163 yards on the ground.

Sullivan caught three passes for 80 yards for the Bulldogs. Hettick and Olson each grabbed two passes, while Ryan Neil, Tucker Winston and Cory West each caught one.

Scout Allen finished with a team-leading seven tackles — all solo — and a pass break up. Sullivan and Tanner Huff registered six tackles apiece.

Kameron Moreno and McClafferty each got in on a sack, while Huff and Neil broke up passes. Billy Kelly was credited with a forced fumble.

“I’m proud of the boys,” Grey said. “Man they played hard. They played physical and they played with energy.”

Grey did not appear to be any more concerned with the second half as he was with the “useless” stats that bring up teams from 28 years ago.

“I’m happy with what we did, and I’m happy with where we’re at,” he said. “It will be nice to turn on that film and see some things that are really correctable and go from there.”