No. 2 Bulldogs look to improve at Glacier 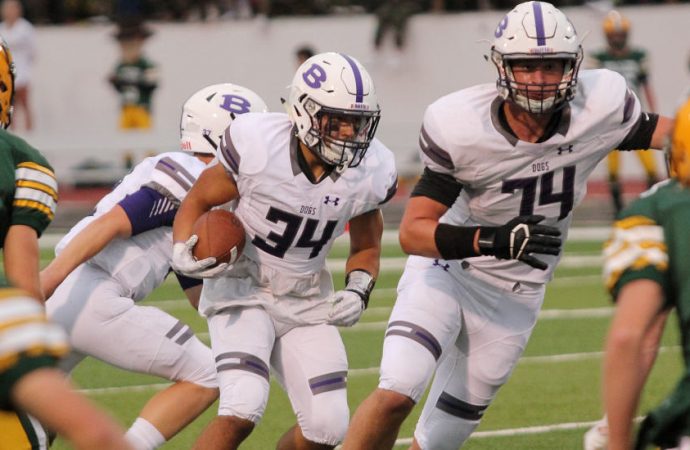 The team, which is ranked No. 2 in the Class AA, however, is from perfect. That is something Butte High head coach Arie Grey said his Bulldogs are well aware of as they head to Kalispell Glacier for a Week 4 battle Friday at Legends Stadium.

Last week, Butte High jumped out to a 28-6 lead and held on to beat Helena High 35-27 at Naranche Stadium to open Western AA play. Despite the win, Grey said Butte High did not play its best game of the season.

“Our kids came in Saturday, and they knew,” the coach said. “When they walk off the field, win or lose, they know how they played. When they really know that, that’s when you’re making steps to get to where you want to be.”

The next step, of course, involves moving to 4-0 overall and 2-0 with a win over the Wolfpack. Grey said his Bulldogs will have to be better this week than last week for that to happen.

“Our guys took it personal for how we played Friday night,” Grey said. “We had some really bright stars and some good things, but we had some things where we need to be better. The film never lies. You can put that on and they can say, ‘Hey, this is what we need to do to get better.’”

Glacier is 1-2 overall and 0-1 in the Western AA after falling 48-33 last week at Helena Capital. The Wolfpack trailed 41-7 before rallying to make it a game against the No. 3 Bruins.

The Wolfpack, which has outscored its 2019 opponents 115-92, rolled past Billings Skyview 47-6 in Billings before dropping a 38-35 decision to Mount Spokane (Washington) at home in non-conference play.

Sophomore running back Jake Rendina’s breakout season has highlighted the Wolfpack running attack, while senior Drew Deck and sophomore Luke Bilau are the top weapons in the passing game.

Glacier scored a pair of special teams touchdowns against Capital. Casey Peiffer took a kickoff 97 yards for a score, while Deck scored on a 74-yard punt return.

“They’re sound in all three phases of the game,” Grey said. “They’re a good program, they’re well coached and they play hard.”

The Wolfpack and Bulldogs, of course, run similar offensive attacks, and that is not a coincidence. Before taking over as Bulldog coach in 2008, Grey served as Bennett’s offensive coordinator at Kalispell Flathead.

“When people watch the game they’re going to see a lot of similarities,” Grey said of the Wolfpack, which uses “a ton” of formations. “They’re trying to stretch the field vertically and horizontally, just like we are. They’re just doing it a little differently.”

While Butte High enters the game with the No. 1 scoring offense in the Class AA with 133 points, Grey said the defense helped carry the Bulldogs to victory last week.

“Defensively, we played lights out in the third quarter,” Grey said. “Offensively we struggled. We can’t do that. We’ve got to be consistent. The run defense was good and the run offense was good.”

Allen, Lee and Kobe Moreno all got in on sacks, and Rylan Richards picked off a pass.

Offensively, Grey said the Bulldogs are ready to take on more.

“Offensively, we’ve been fairly generic,” the coach said. “We haven’t opened up. I think that’s something we’re going to have to do each week is continue to add to what we’re doing and finding other opportunities and other methods.”

Grey pointed to Butte High’s players working with the Mining City Little Guy Football teams at practice the last couple of weeks as an example that his team can handle the extra workload.

“That equates to the football field and the things that we have to do,” Grey said. “Each week what we’ve given them, they’ve embraced it and gotten better.”

There is nothing generic about Butte High senior quarterback Tommy Mellott. The Montana State commit has completed 71 percent of his passes through three games. He’s racked up 875 yards and 10 touchdowns through the air. He’s thrown just one interception.

Mellott has also ran for 246 yards and a score in three game.

Senior Kameron Moreno is averaging more than 100 yards per game after running for 165 yards on 36 carries behind Butte High’s offensive line made up of starters Konor McClafferty, D.J. Jackson, Ty Raiha, Timothy Hollingsworth and Lucas Kingston.

Josh Nelson and Kobe Moreno are capable of sharing the carry load, too.

Cory West, who had a big kick return last week, has eight catches, while Tucker Winston has seven and Sullivan has six.

Sullivan, one of the top deep threats in the state, and Cetraro each have scored three receiving touchdowns. West has two.

The Bulldogs will be on the road next Thursday to take on Missoula Sentinel. Butte High’s next home game is the Oct. 4 showdown with Capital.