Sara Lightner has some fun with students at the end of a recent taekwondo class at the Rocky Mountain Martial Arts academy in Butte. (Bill Foley photos)

Sara Lightner knows firsthand what it is like to try to fill some ginormous shoes in the Mining City.

Three and a half years ago, Lightner purchased the Rocky Mountain Martial Arts academy from Master Jim Miller, taking over for a man who has long been a legend in the ranks of teaching the martial arts.

“It’s intimidating,” Lightner said of replacing Miller, a fifth-dan black belt in Taekwondo. “He has spent his whole adult life doing it. I feel like I’m pretty new to it.”

Lightner, though, has more than held her own as she strives to continue the RMMA mantra, which is “self-value is priceless.”

“She just keeps on improving,” said Miller, who still teaches classes two or three days each week. “We always have something to work on.”

Like Miller, Lightner said she doesn’t run the academy to make money.

“It pays its own bills,” Lightner said. “I don’t take any money out of it. Right now it is for the love it and making sure it is here for the community and so I can continue to learn,

“I like Butte and I think it’s a great community,” Lightner added. “But I know there are a lot of broken homes and bad influences. To know I can be a positive influence is good.”

Lightner came two Butte from Columbia Falls six years ago. She quickly found a home at RMMA. She also quickly moved up the ranks in Taekwondo under the tutelage of Miller. Lightner was promoted to third-dan black belt over the summer.

“I came here with a yellow belt from a school in Whitefish in December 2011,” she said. “I was doing seven classes a week when I first started. I came to every weekday class and Saturday classes.”

Miller said Lightner was, and still is, a great student of Taekwondo.

“She knew what she wanted and got after it,” Miller explained.

Making Lightner’s climb up the ladder even more impressive, is she did it as a working single mother. She first worked at Rocky Mountain Hospice and then at Air Exchange Oxygen, where she has been employed the past five years.

Lightner came to Butte with her son, Ryan, who is now 15, after Ryan’s father died of cancer. Lightner made the move to be closer to her brothers —  Gus Senst lives in Whitehall, and Jason Senst lives in Anaconda.

“At that time it was just Ryan and me,” Lightner said. “I wanted him to have a good male role model. My brothers are such great guys. They are great role models for Ryan.”

The recently-divorced Lightner also has a son, Caleb, who is 2 and a half. So between work, picking up Caleb at daycare and teaching classes at RMMA, Lightner routinely puts in days of more than 12 hours.

“It keeps me super busy,” she said. 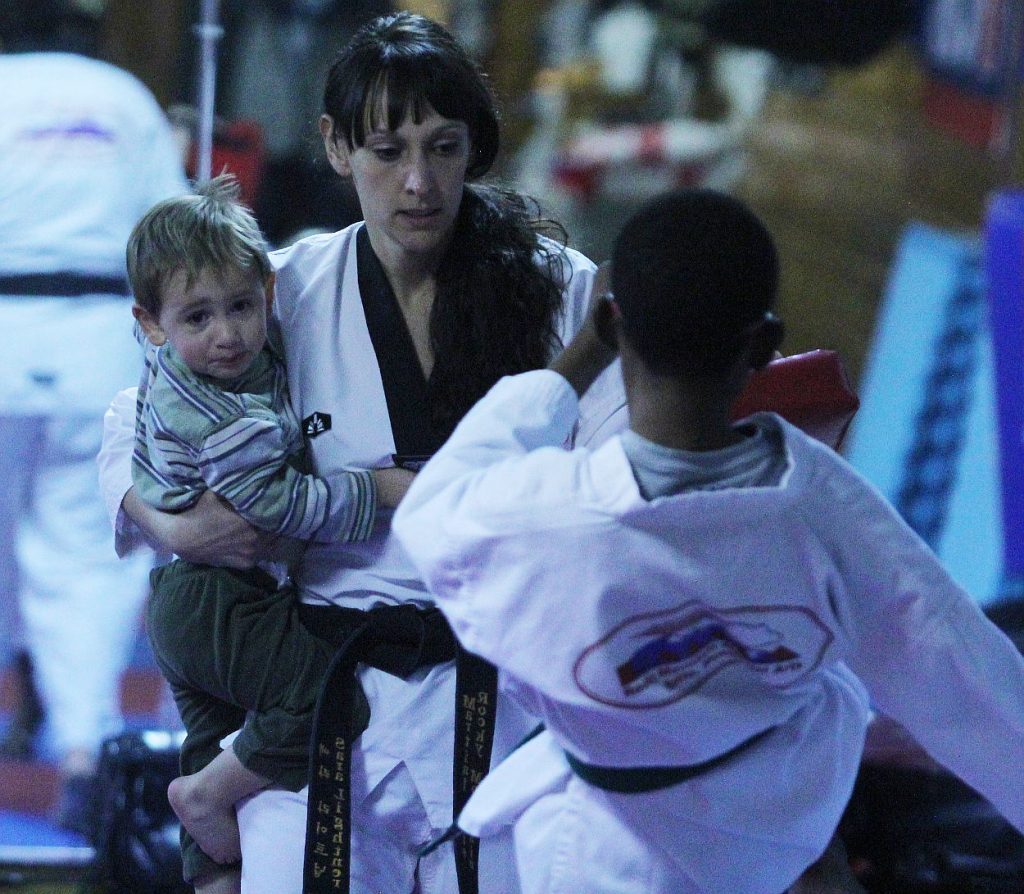 Sarah Lightner holds her son, Caleb, as she instructs a student on kicking.

Since Lightner taught classes while she was pregnant with Caleb, her youngest son has literally been part of RMMA since before he was born. Now he even kind of participates in the classes.

“He’s here with me every day,” Lightner said. “He’s got all the commands down.”

While it isn’t necessarily a command, one of the principles Lightner teaches is for students to stand up for themselves.

“I try to teach the kids to stand up for yourself and fight for yourself, to know you are worth to fight,” she said. “I teach then to not be the instigator.”

And, of course, there’s Miller, who says he is slowly retiring with his 80th birthday approaching.

“It has been very awesome to have him around. He is always here to answer questions,” Lightner said of Miller. “Without help from Master Miller and the other black belts, it would be hard. I’ve gotten really good support from all the other schools.”

Rocky Mountain Martial Arts is located in a small building next to the Longfellow Little League complex at 3233 Kennedy Ave. RMMA was started by Con Healy, who ran the school at the old YMCA on Park Street. Miller purchased the school from Healy in 1996 and moved it to its current location.

Most of the students are children, but RMMA welcomes people of all ages. Currently, the academy has students ranging from 4 to a 65-year-old white belt.

All prospective students get the first two weeks free to try out RMMA. If a current student brings a friend, that friend gets two free weeks and the student gets a month at half price when the student signs up for classes.

The after-school program is extra.

That is a program that Miller started several years ago. Lightner has continued it, and the 15-passenger RMMA van has 12 seats filled as it goes around town picking up students at almost every elementary school in town.

In addition to school pickups, the program includes help with study habits and tutoring.

“They don’t always get their homework done, but they have the time and opportunity to do it,” Lightner said.

For more information about Rocky Mountain Martial Arts, stop by the school, call 494-2754 or visit rmma-butte.com.