When Chuck Morrell left Montana Tech for an assistant coaching job at Fresno State, the easy choice would have been to immediately promote Kyle Samson to head football coach.

Promoting the Orediggers’ offensive coordinator with a strong record in the Frontier Conference would have also been the popular choice on campus and in the community.

When filing his first major job since taking over as director of athletics, however, Matt Stepan said he was not about to go the easy rout.

“This job is worth it,” Stepan said. “It is worth turning over every stone.”

In the end, that stone turning still led to Samson. The 5-foot-8 former MSU-Northern and Helena Capital quarterback stood head and shoulders above the field of more than 100 applicants.

While meeting the media and Oredigger fans for the first time as head coach Wednesday afternoon at the Student Union Building, Samson said he was happy the Orediggers went the rout of a national search.

“I don’t want to be given anything,” Samson said in front of a crowd of abut 150 that packed the Copper Lounge. “I want to earn it.”

The hiring process included a 12-hour interview with Samson, who left his job as head coach at Kalispell Flathead High School last January to join Morrell’s staff in Butte.

“I was able to share my vision and share my plan, and I earned it,” Samson said.

Stepan said Samson, who is known for his positive attitude, was choice was clear.

“You can see the difference in someone who sees a great opportunity and someone who wants to be here,” Stepan said. “Coach Samson checked every box.” 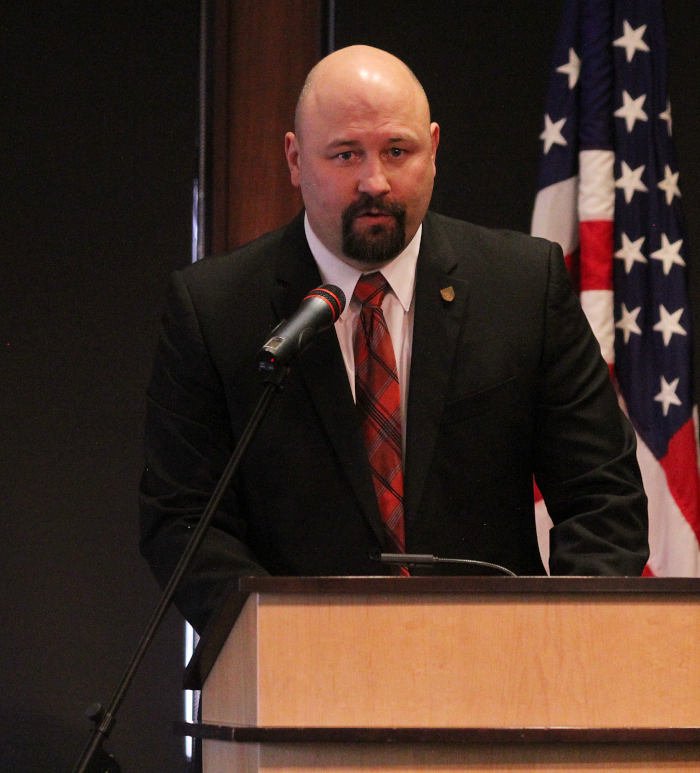 Montana Tech Director of Athletics Matt Stepan introduces Kyle Samson as the next head football coach of the Orediggers Wednesday.

Samson, who will turn 35 next month, said his vision of the Orediggers includes “family” and “count on me.”

“I want this to be a second family to our student-athletes,” Samson said. “I also want to reach out and be a great family to the community of Butte.”

The second part includes trusting each other.

Samson spoke for several minutes, offering thanks to the many people who helped him along the way. That included Morrell and former Oredigger coach Bob Green. Green, whom Stepan introduced as “Mr. Pam Green,” was in the crowd.

The new head coach introduced his family — his wife, Brooke, and children, Troy, Jordyn and Beau.

“I wouldn’t be here without them,” Samson said as the four stood to an ovation from the crowd.

“The No. 1 thing they did for me is believe in me,” Samson said.

Mark Samson is currently the head coach of the Great Falls High football team. He coached Kyle Samson and his brother Marc at Helena Capital and at MSU-Northern.

Kyle Samson spent his first year in college at the University of Montana. He transferred to the Havre college to play for his father again.

“I am the coach I am today because of him,” Samson said of his father. “Very few people get to play for their father in high school and college.”

Samson is the grandson of the late Bob “Putter” Petrino, a Mining City native who coached at Butte Central before beginning his long-time run as head coach at Carroll College. His uncles, Bobby and Paul Petrino are accomplished college coaches.

The theme of Wednesday’s press conference was clearly “family.” It was mentioned over and over by Stepan and Samson throughout. Stepan said there is a reason for that.

“I don’t think there is a better way to describe the next coach than ‘family,” Stepan said.

Samson said that expanding that family into the community means even more community involvement from the Orediggers.

“I’m extremely passionate about getting out and supporting the great community of Butte any way we can,” Samson said.

That vision also includes heavily recruiting football players from Butte. He noted that he got commitments from Butte High brothers Kameron and Kobe Moreno on his first day on the job.

“We’re going to win Butte,” Samson said. “My No. 1 goal is to get the best out of Butte. We also want to win the State of Montana.”

Out-of-state players will also have a spot, too, Samson said. The key is that every player has to fit into the program and the school, citing the school’s high academic standards.

“It is a privilege to be here, not a right,” Samson said. “To me, this is the best institution in the State of Montana.”

Samson is already working to put together his staff. He said he is hoping to retain members from the current coaching staff while also looking for guys on his “coaching tree” that comes from runs as offensive coordinator at Northern and head coach at Flathead.

He said he plans to continue to call plays as offensive coordinator of the Orediggers. He said calling plays and game planning are his “passion.”

Being positive is another passion, and Samson said he will continue to be that way as he steps into his first college head coaching job. Stepan said he has seen that since Samson moved to town last January.

“Sometimes I want to have a bad day and he just won’t let me do it,” Stepan said, adding that the hiring of Samson is a “big win for the community of Butte.”

The coach said he is excited to get to work as the third head coach at Montana Tech in 33 years. He is ready to show why Stepan said Samson was worth all that extra work.

“I can’t wait to get to work,” Samson said. “Go Diggers and I promise you can count on me.”