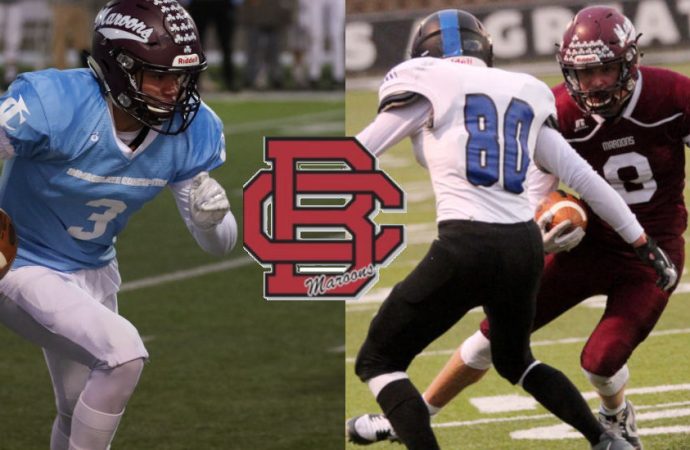 Trevor Neumann signed to play at Montana Tech Thursday, while Matt Simkins confirmed his commitment to the University of Montana on Friday.

Both are following in familiar footsteps.

Neumann will be the third member of his family to play sports for the Orediggers. His brother Tanner had a successful career on the Tech men’s basketball team, and his sister Danika was a four-year player on the Oredigger volleyball team.

“I wanted to continue the tradition in my family,” Neumann said Friday “I think it is awesome to continue it in a new sport.”

The 5-foot-11, 170-pound Neumann will play receiver for the Orediggers.

The signing comes after Neumann caught 38 passes for 741 yards and four touchdowns for the Maroons this fall. He lettered for the fourth time for the Maroons in football.

Neumann, the son of Dan and Jackie Neumann, will also letter for his third time in basketball this season.

Simkins is following his brother Jake to the Grizzlies. Jake followed a stellar career at BC by playing a couple of seasons with the Grizzlies.

“I’ve always like the Griz since I was a little kid,” Matt Simkins said. “My brother went there, and I liked to watch them. It’s a sweet atmosphere.”

After missing a chunk of his senior season, the 6-4, 205-pound Simkins plans to play tight end with the Grizzlies as a walk-on player.

Simkins, the son of Randy and Wendy Simkins, also lettered four times in football for the Maroons. Along with his twin brother Jared, Simkins has contributed for the BC basketball team for four season.

Matt Simkins is targeting next week to return to the basketball floor.