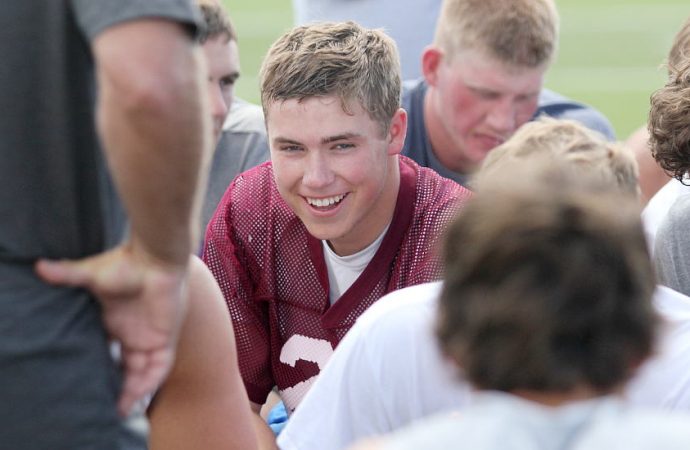 It was a November football game in Whitefish where Butte Central’s Nate McGree first burst upon the scene, and .probably the screen of potential watch list for recruiters.

He was a smallish sophomore with good athleticism and began seeing more action toward the end of the season and playoffs when the Maroons faced more air-oriented offenses with accurate quarterbacks.

So, on that Whitefish game, McGree intercepted two passes as Butte Central posted a 37-13 victory in the Class A playoffs semifinals, and BC fans began looking forward to watching him play the next two years.

The two years are up.

McGree, now 6-foot-2 and 210 pounds, is fresh off a state Class A championship triple jump of 44 feet, 8 ¾ inches and practicing with the West Team for the nearing East-West Shrine Football game. The West practices are being held at Montana Tech, the game is slated for Saturday night in Billings.

“This is a lot of fun,” McGree said Tuesday as the second of three practices that day on Bob Green Field ended and players dispersed. “It’s good to play with guys I’ve been reading about, see who they are. They’re good guys, too, so it’s fun.”

McGree is a two-year All-Stater at safety and has all-conference credits at receiver. He will line up as a receiver versus the East, then will try out a new position next month. McGree has signed the Carroll College and family pact, and joined the Saints’ program.

“Outside linebacker,” he said with a grin, acknowledging he’s never played there before.

It is kind of odd that he hasn’t, because McGree has logged time in Butte Central football for head coach Don Peoples Jr. at running back, quarterback, tight end, fullback, wide receiver, strong safety and free safety. He set a school record with a 99-yard yard touchdown gallop while wildcatting against Stevensville from the quarterback position.

Still, there will be some similarity as, McGree said, the linebacker spot he’ll play at Carrpll will be kind of a hybrid with strong safety qualities.

Both of McGree’s parents and his two older siblings went to, or are enrolled at Carroll. His dad, Jim, played in the 1981 Shrine Game for the West before reporting to the Saints. His older brother, Connor, is a tight end in the Carroll program and his older sister, Lacey, a former BC volleyball standout, is a Carroll student as well.

“This is my last game on offense,” McGree said with a smile and a nod, “unless (Carroll coaches) change me to another position.”

He graduated with a 4.0 average and starred in football, basketball and track at Butte Central. He has postseason experience in every year of every endeavor.

The preparation for this last game representing the Maroons has proven to be a crash course in learning the Helena High offense of Tony Arntson, who is also this year’s West head coach.

“Hard? Well, all the practices are hard,” McGree said. “But, there’s so much thrown at you at the beginning, learning some new plays. “

Really, though, McGree said, the offense has turned out to be smoother to decipher than first feared, once the terminology was learned.

The multi-sport standout wound up having to choose between football and track to continue athletics in college. It wasn’t an easy choice.

“I thought it would be,” he said. “I thought once (each season) got over, I would know what I wanted to do, which to choose. I didn’t.

“I thought, though, if I decided I wanted to go back to track, I could probably go talk to the Carroll track coach and there might be something there.”

The thought doesn’t mean he is not committed to football. Right now, football is too fun not to prefer. McGree’s actions radiated such.

“A lot of these guys got to play in the Mon-Dak Bowl (Badlands Bowl),” he said. “I didn’t, but they got to know each other and became friends and came here to play for the West. They’re really good guys and I fit in with them well. They’re easy to get along with.”

So, this experience of Shrine Team camp is like a college prep. He will be joining another collection of good athletes working toward a common goal in the Carroll football program, and the steps made this week might lead nicely and smoothly into that huddle.

Note: Butte Sports will profile the five Butte players playing in the Montana Shrine Game this week. Other players representing the Mining City on the West Side are Kiley Caprara, Sam Johnston, Blake Burton and Bryce Gallagher.