Natalee Faupel’s jersey to hang at Hall of Fame 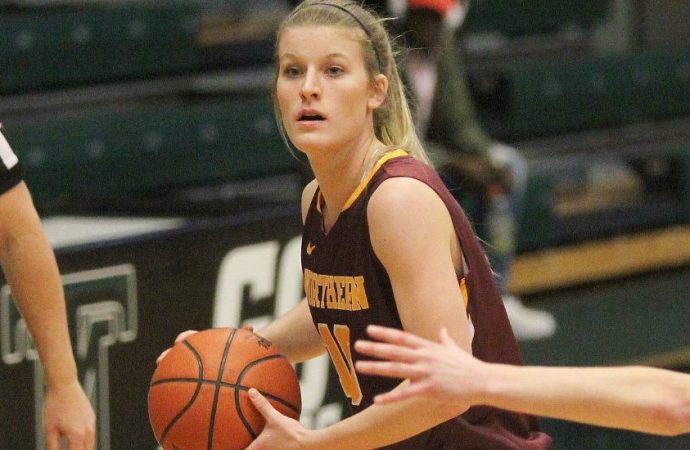 HAVRE — Butte High graduate and MSU-Northern star Natalee Faupel will have her jersey displayed in the Women’s Basketball Hall of Fame in Knoxville, Tennessee.

Northern coach Chris Mouat told ButteSports this morning that Faupel’s jersey will hang along with more than 100 other high school and college All-American jerseys as part of the Ring of Honor, which is one of the Hall’s most popular exhibits.

Faupel, a junior guard/forward, becomes the second Skylight to have her jersey hang in the Ring of Honor, joining A’jha Edwards, whose jersey represented the 2014-2015 class.

“This is a huge honor for Natalee and a nice reward for an excellent season,” said Mouat, a former Butte High head coach and Montana Tech assistant. “It is also really big for MSU-Northern and our basketball program because her jersey will be displayed with some of the very best players in the nation from this past season.”

Faupel, a 2013 Butte High grad, was named the Frontier Conference Player of the Year after averaging 16.3 points per game to lead the Skylights to a 23-9 record and a trip to the NAIA National Tournament. She was also named to a pair of All-American teams.

In three years at Northern, Faupel has scored 1,260 points.

Before heading to the Havre college, Faupel was a four-year contributor for the Butte High girls’ basketball team. She was also a standout in soccer and track for the Bulldogs. 1 comment