The mystique of the unknown dominates the beginning of every high school track season.

That will never be truer than in the 2021 season. When Butte High opens the season Tuesday in Helena, the Bulldogs will be mostly an unknown to everyone, including their coach.

With the entire 2020 season wiped out by the COVID-19 pandemic, the Bulldogs graduated two classes since they competed at the Class AA state meet May 24-25 in Kalispell. (Roster)

Butte High has about 160 athletes out for the team, but just seven of those enter the season with experience at the State meet. That includes 14 returning letter winners.

“It’s going to be the smallest number of kids returning to the state track meet ever,” Grey said.

Some things, however, are still are very much known. Like Anna Trudnowski.

The Butte High senior signed to run track at Montana State in November after placing second in the high jump as a sophomore in 2019. She cleared 5 feet, 5 inches, but lost to Kalispell Flathead senior Madison Boles by jumps. She also placed fifth in the 300-meter hurdles.

The strong 2019 showing came one year after Trudnowski tied for fifth in the high jump with a mark of 5-3. Without the pressure of college hanging over her head, Trudnowski said she hoping to clear 5-7 this season.

“I think they got a steal. I really do,” Grey said of the Bobcats signing Trudnowski. “Watching where she’s at fit wise right now, it’s unbelievable.”

At State two years ago, Trudnowski competed in six events. That includes the 100- and 300-meter hurdles, triple jump and 1,600 relay.

Bulldog senior Madalynn Rhodes is the only other returning All-State performer for the Bulldogs. She placed fourth in the javelin with a mark of 125 feet, 8 inches.

“She kind of came out of nowhere and popped one at state,” Grey said.

In 2021, Grey said he expects more of that this season.

Junior Mollee Conlan is back after a strong freshman season. She qualified for State in the 100 and 400 relay. Senior Haley Nielson, a future Montana Tech Oredigger, ran the 1,600 and 3,200 for at State.

Senior Allyson Mueller ran the 1,600 relay at state two years ago, and senior Taylinn Garrett made the trip as an alternate. Hannah Morin-Ferguson is another returning letter winner. She is looking forward to a strong senior season. 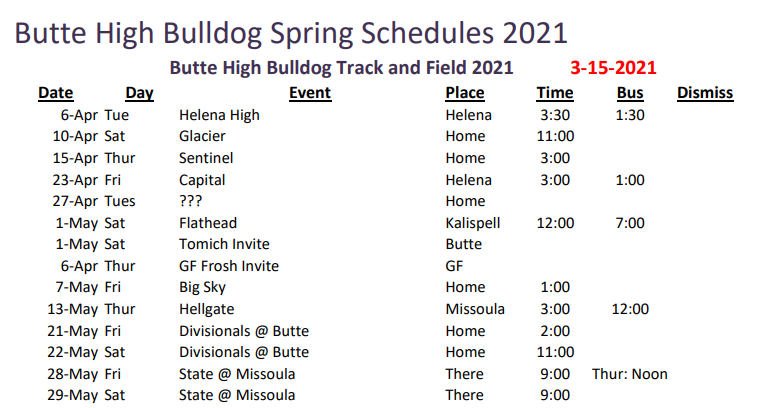 On the boys’ side, only seniors Zach Merrifield and Tanner Huff return with state experience. Merrifield, who is still working back from a gruesome leg injury suffered just after the 2019 season, ran the 400 relay, and Huff, a future Montana Western football player, threw the javelin.

Senior Ryan Neil was an alternate at state for the Bulldogs

Grey said he is proud of all the athletes who went out for the track team because last year gave them all the chance to see what it is like to go through the spring without having to compete.

“I’m happy where we are numbers wise. It’s a credit to the kids,” Grey said. “The seniors that came out are really the ones I’m most proud of. They could have said, ‘I’m done.’”

The track season will look much different this season, with the Bulldogs competing mostly in duals. Their schedule will resemble the football slate from last fall, though all home meets will again include Butte Central.

The Bulldogs’ first home meet will be April 10 when Glacier comes to town to compete with the Bulldogs and Maroons.

Butte High is set to host the Western AA Divisional meet May 21-22. The State meet is set for May 28-29 in Missoula.

The details of the postseason tournaments, however, have not all been ironed out.