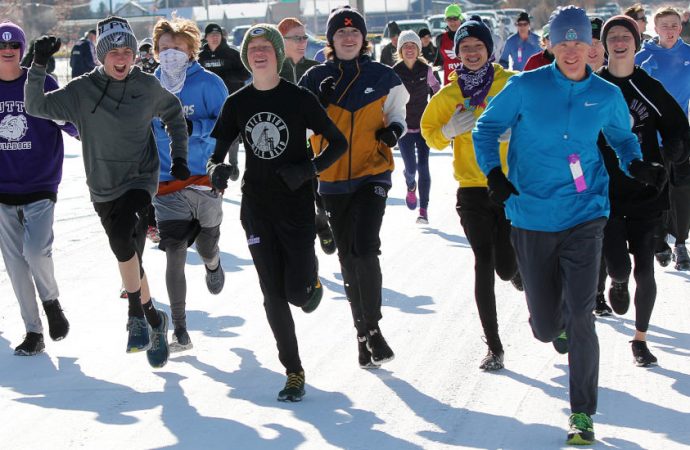 Runners take off for the start of the 82nd Veterans Day Race Monday in Butte. (Bill Foley photos)

Nicole Murray of Whitehall and Don Foley of Butte ran to overall titles during the 82nd Veterans Day Race Monday in Butte.

Murray won the women’s title for the third straight year and the unprecedented 13th time overall. She posted a time of 35 minutes, 18 seconds to win the 5-mile race. (Age group results; Overall results)

Former champion Michele Bazzanella of Butte finished runner up on the women’s side with a time of 41:45. Dana Erickson of Butte placed third in 43:26, and Carrie Holland of Butte placed fourth at 45:52.

Runners take off for the start of the 82nd Veterans Day Race Nov. 11, 2019 in Butte. (Butte Sports file photo)

Foley, an assistant coach on the Butte High cross country team, won the men’s title with a course-record time of 33:03. The longtime course was changed last year to start and finish at the new American Legion Hall.

The win marked Foley’s first overall title in the Veterans Day race since he won the 2.5-mile race in 1985.

Ryan Tomich, a Butte High freshman and one of several Bulldogs running in the race, placed second at 34:58. Butte High junior Grant Smith placed third in 35:08, and sophomore Brady Maloughney took fourth in 35:09.

In all, 50 runners braved the snowy-and-icy roads to run Montana’s oldest road race.

The race was created in 1934 by two World War I veterans, C. Owen Smithers and Charlie McAuliffe. Since then, the race has been held every Veterans Day except during the World War II years between 1942-45.