Muffich signs with Western from the weight room

The setting could not have been more symbolic.

“It was cold out, and (Butte High coach Arie Grey) said ‘weight room or gym”’” Muffich said. “I said, ‘Let’s do the weight room. No one else has done it yet.’

“I love the weight room. Putting in the work, it’s fun.”

That weight room, after all, if what helped turn Muffich into the player that he was for the Bulldogs.  It is where he spent in all those summer mornings and the mornings before school started.

That helped the 5-foot-11, 195-pound Muffich turn into the salty, hard-hitting linebacker that led the Bulldogs with 101 total tackles in 2021. That includes 68 solo tackles and seven tackles for a loss. He got in on one sack, forced two fumbles and recovered one fumble in helping lead the Bulldogs to second place in the Western AA.

Muffich, who was named second-team all-conference and received an All-State honorable mention, is also known for his Scout Allen-level smack talk and vocal leadership.

“You look at what he did for us,” Grey said. “He was the emotional leader for us and the guy who plays it the way it is meant to be played. He’s physical snap to whistle. Those are the things that we’re going to miss, and somebody is going to have to fill that hole.” 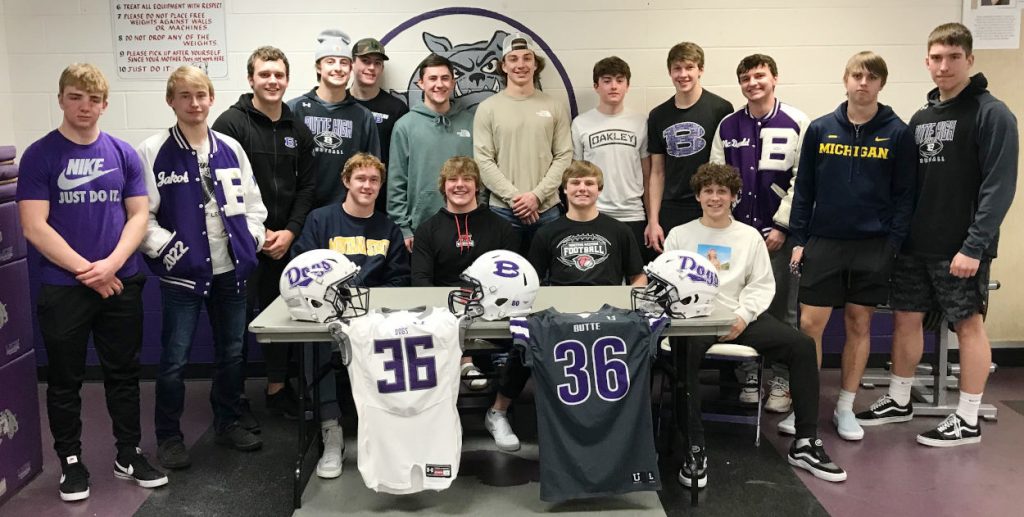 Muffich sat between his parents Corey Muffich and Shawn Muffich as he signed. His brother Dawson looked over his shoulder, and his sister Harlee looked on.

“I’m excited to get down there and get to work,” Muffich said of attending the Dillon school. “It’s another step, and I get to keep playing football. It’s awesome.”

Muffich plans to study kinesiology at Western. That will open the door to physical therapy or possibly medical school after his playing days.

He got a taste of the Western atmosphere Nov. 13 when Western beat Rocky Mountain College in the final-regular season game. That win gave the Bulldogs the Frontier Conference title and a trip to the NAIA playoffs.

“I went to that their conference championship one against Rocky,” Muffich said. “The environment was just insane. The energy and the fans that come out and support Bulldog football are just insane.”

Grey said Muffich will thrive playing for the Bulldogs and attending Western.

“He’s a kid who loves the game of football,” Grey said. “He’s excited about the block schedule, and I think that’s the key for wherever you pick to go on the next level. He’s excited to go play some football.”