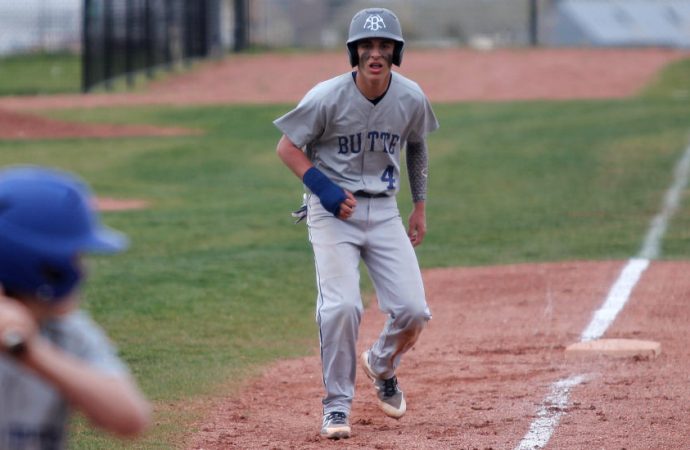 The Butte Muckers swept a Sunday doubleheader with the Helena Independents.

Butte came from behind to walk off with an 11-10 win in the opener before completing the sweep with a 13-6 victory in Game 2 at Miners Field at 3 Legends Stadium.

The Independents are Helena’s Class B American Legion Baseball team.

The Muckers are home again Tuesday to take on the Anaconda A’s. The seven-inning game begins at 6 p.m.

Butte’s Gian Reynolds brings a chair to the celebration as the Muckers walk off for a Game 1 win. (Bill Foley photo)

Butte 11, Helena 10
Hunter Hotalen hit a long single to left-center field to score Max Demarais with the winning run in the bottom of the seventh inning.

The Muckers loaded the bases with no outs to set up Hotalen’s game-winning hit. Demarais walked before Ethan Edwards singled and Kadyn Lester walked.

The Independents brought their infielders in, and the outfielders played shallow. Hotalen hit a shot that rolled to the fence. He raced around the bases as the Butte boys celebrated.

The hit, however, officially goes down as a single.

The walk-off fun came after the Muckers tired the game with two runs in the sixth inning. It also came after the Independents jumped out to leads of 5-0 and 7-2.

Demaris hit a pair of doubles in the win. Eyston Lakala, and Brady Garner joined Demaris and Edwards with a two-hit game.

Garner pitched five and a third innings of relief to keep the Muckers in the game after the rough start. Klobucar pitched a scoreless seventh to get the win.

Logan Kirkpatrick and Matthew Goleman each smacked a pair of hits to lead Helena.

Butte 13, Helena 6
The Muckers again fell behind early in the second game.

Butte, though, took the lead for good with five in the third. The Muckers added four in the fourth and two in the sixth.

Demarais went 4 for 5 with two RBI’s to lead Butte’s 14-hit attack.  Rye Doherty went 3 for 5 with three RBIs. Hotalen and Lakala each hit a double and a single.

Garner, Ethan Cunningham and Gian Reynolds singled in the win.

Lakala pitched into the sixth to get the win. Hestruck out five. Edwards got the last four outs, two by way of the K.

Tycen Mooney and Eric Cockhill each poked a pair of hits to lead Helena.