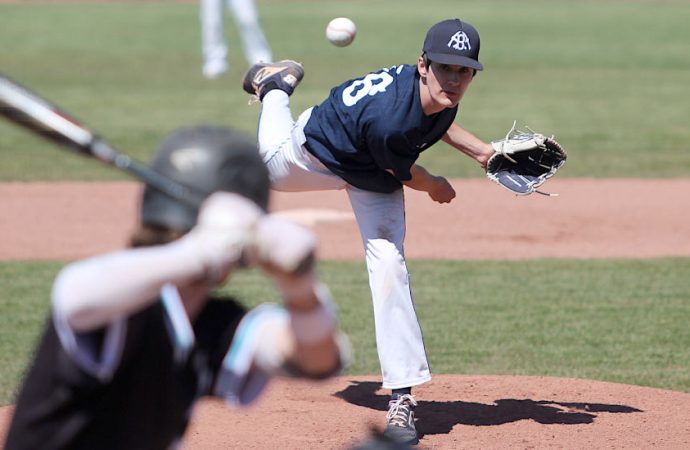 The Butte Muckers trailed in both games with the Belgrade Bandits B team Saturday at 3 Legends Stadium.

Both games, though, ended very much in favor of the home team. The Muckers won the opener 11-7 before rolling to an 18-4 victory to complete the sweep on Miners Field.

Butte, which improved to 16-5, is back in action Wednesday with a doubleheader at the Missoula B team. The Muckers will play their final home games of the season Friday against the Bitterroot Bucks B team. 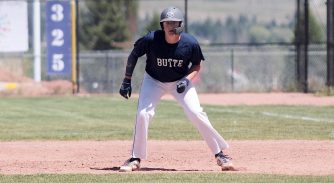 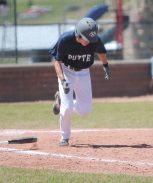 Mucker Jakob Nielsen busts it down the line to beat out a grounder. (Bill Foley photo) 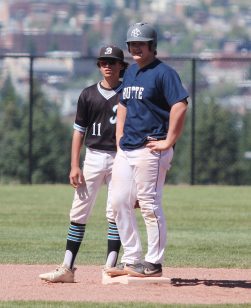 Butte’s Zach Tierney stands on second base next to Belgrade shortstop Jayden Jacksha after Tierney blasted a Game 2 double to the fence. (Bill Foley photo) 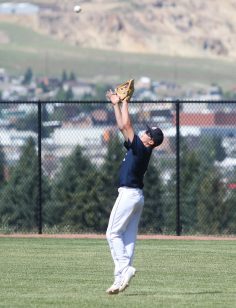 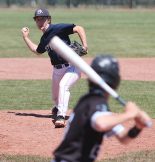 Game 1
Muckers 11, Bandits B 7 (Boxscore)
The Muckers broke open a 7-all tie with four runs in the bottom of the sixth inning.

That rally set up starter Hunter Hotalen for the victory. The crafty Hotalen pitched six innings to give the Muckers a chance.

Zach Tierney drove in three runs and hit one of Butte’s four doubles in the opener. Kadyn Lester, Max Demarais and Kevin Donaldson each doubled Donaldson also singled, and Anthony Knott hit a pair of singles and drive in two from the leadoff spot.

Lester also knocked in two runs. Ethan Cunningham, and Jakob Nielsen singled in the win. Rye Doherty got the last three outs from the bump.

Game 2
Muckers 18, Bandits B 4 (Boxscore)
Tierney hit a home run and a double, and Trey Hansen tripled and drove in four runs to lead the Muckers in Game 2.

Doherty doubled in a 3-for-4 effort, and Knott doubled in Butte’s 10-hit attack. Cunningham, Demarais and Lester singled Knott, Doherty, and Tierney each knocked in two runs.

Mike McGivern pitched into the fourth inning for the victory. Cunningham got the final four outs for the win, which was called by the 10-run rule after five innings.