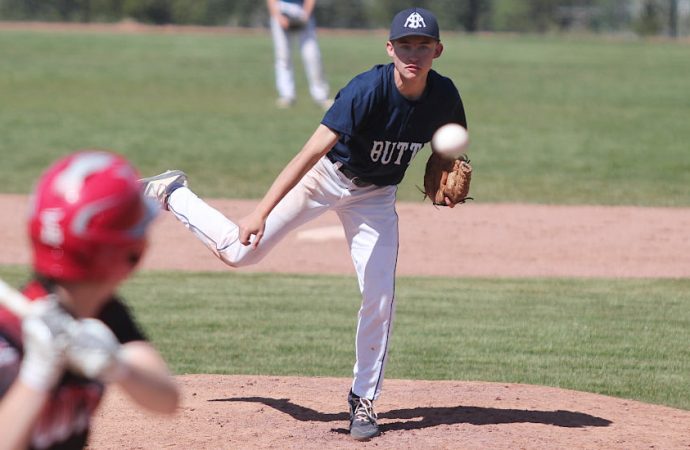 The Butte Mucker picked up a win and a loss Sunday in a Father’s Day doubleheader with the Great Falls Outlaws on Miners Field at 3 Legends Stadium.

Butte won the opener 13-2 in five innings. Great Falls jumped out early and held off the Muckers for a 19-14 win in Game 2.

The 10-3 Muckers are back at home Tuesday to take on the Missoula Mavericks B team in a 4 p.m. twin bill.

Muckers right fielder Trey Hansen follows threw with a throw that guns down a Great Falls runner at the plate. (Bill Foley photo)

Butte’s Sean Ossello drops down a bunt in an attempt to catch the Great Falls defense off guard. (Bill Foley photo) 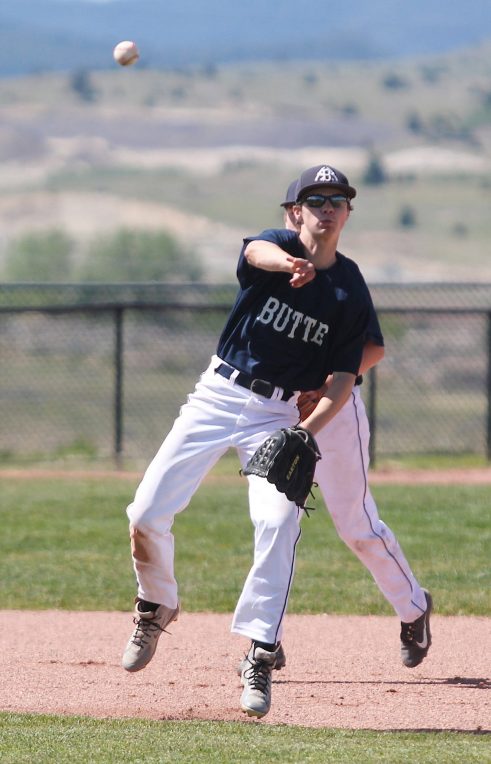 Game 1
Muckers 13, Outlaws 2 (Boxscore)
Hunter Hotalen pitched the distance, striking out three and scattering three hits and five walks for the win in the opener.

He got more than enough offensive support as the Muckers erupted for 10 hits. Anthony Knott doubled, while Zach Tierney and Eyston Lakala each poked a pair of singles.

Logan Sloan doubled to lead the Outlaws. Trigg Mapes and Wyatt DeVoss each hit a single.

Game 2
Outlaws 19, Muckers 14 (Boxscore)
While it took a little longer to heat up, the Muckers offense was just as punishing in the second game.

First baseman Max Demarais hit two doubles and drove in four runs to lead the Muckers, who smacked 11 hits in the game.

Great Falls, though, struck early and held onto the lead after scoring six runs in the top of the second inning.

Landon Lockwood went 4 for 5 with a double, two RBIs and three runs batted in to lead the Warriors in the win. Evan Brown, Mason Davis, Josiah Mazira and Sloan each had a two-hit game. Wyeth Hayes, Sloan and Mazira doubled.

Lakala, Nielsen, Sean Ossello, Trey Hansen and Brady Shannon all pitched for the Muckers. Lakala, making his return from offseason surgery on his wrist, started in hi first game since July. He is making a few rehab appearances with the Muckers before moving up to the Miners.