WHITEFISH, Mont.- Montana Tech nearly swept the Frontier Conference awards this year. In his 11th season, head coach Brian Solomon was named the Frontier Coach of the Year. The Orediggers received the nod for the other top award with Maureen Jessop being named the Player of the Year.

Coach Solomon led the team to their third regular season title under his direction and this is the fourth time he has been named Frontier Coach of the Year. The 2022 season will be the fifth time coach Solomon has led the team to the NAIA National Tournament. The Orediggers (24-8, 9-1) won 11 straight matches during the season and went 17-3 since September 1st. Jessop is the second Oredigger that has earned the Frontier Player of the Year award for Coach Solomon.

Jessop, a 6-1 senior outside hitter, earned her third first-team all-conference award and fourth year making it onto an all-conference team. Jessop had her best season this fall leading the Frontier Conference in total kills (416), kills per set (3.85), and aces (36). Her kills and kill per set are the highest offensive production in her four seasons. Jessop was named Frontier Conference Attacker of the Week five times this year. Jessop also had a career year in blocks finishing with 15 solo and 45 block assists. 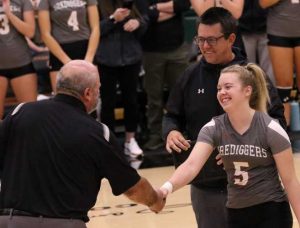 The second team all-conference honor is the third time Kaelber has been named to the all-conference teams and first time she has received the Frontier Setter of the Year award. Kaelber averaged 8.05 assists per set this season and has 692 total assists despite missing some matches this fall.

Caddy, a freshman from Missoula, Montana, was a defensive staple for the Orediggers this year. Caddy has 480 total digs while averaging 4.17 per set this season. She also has 16 service aces on the year.

Henley, a 6-1 senior middle blocker from Kalispell, Montana, led the conference and the NAIA in blocking for most of the year in blocks. Henley has 135 total blocks this season and averages 1.17 per set. She is currently ninth in the NAIA in total blocks. Henley is second in the conference in hitting percentage with a .270 and has 231 kills this year averaging a career high 2.14 kills per set.

Olivia Muir is a senior outside hitter in her second season with the Orediggers. From Smoot, Wyoming, Muir had a great year finishing with 355 kills and is fifth in the league in hitting percentage with a .222.

Willmore, a 6-1 outside hitter from Claremont, California, had a solid start to her career as an Oredigger. Willmore had 168 kills this season averaging 1.68 per set with a .135 hitting percentage. She hit double-digit kills six times with a season high of 15.