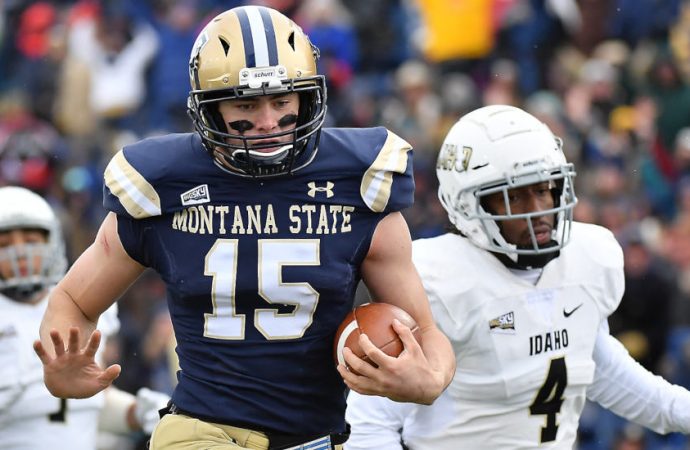 Montana State’s Troy Andersen is shown in this MSU photo by Dean Hendrickson.

BOZEMAN — Troy Andersen, who begins the 2019 season with a definite but undefined role in the Bobcat offense, lands on the initial 2019 FCS Walter Payton Award Watch List, STATS announced on Wednesday.

“I’ve talked about this,” Choate said, “but we have to open our minds to not putting Troy in a box. We’re going to use him (on offense) in ways that he’ll be able to positively impact any given game the most. He could line up at running back, he’ll take some snaps, he may play with Isaiah (Ifanse) in two-back sets, he may line up at tight end, he may split out as a receiver.”

A 6-foot-4, 228-pound junior, Andersen also opens the 2019 as the projected starting Sam linebacker. He rushed for 1,412 yards and threw for 1,195 last season, and his 21 rushing touchdowns in 2018 set an MSU single-season record. His 1,927 rushing yards is already 12th in Bobcat history. He is one of five Big Sky Conference selections on the 25-player list.

Montana State begins practice for the 2019 season on Friday at 3:45 p.m. on the Dyche practice fields southeast of Brick Breeden Fieldhouse.