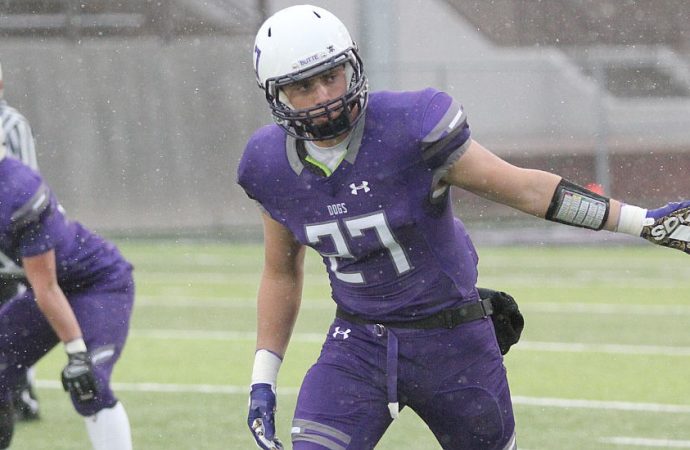 Nathaniel Morin-Ferguson is planning on upgrading his seats at Washington-Grizzly Stadium.

The Butte High senior, whose family has season tickets to watch the University of Montana football team play in Missoula, committed to play for the Grizzlies. He announced his decision to join the Grizzlies on Twitter this week.

Morin-Ferguson, who will be a preferred walk on for coach Bobby Hauck’s Grizzlies, will primarily focus on punting, but he will look for opportunities as kicker as well. He hasn’t entirely ruled out the possibility of trying out for other positions, either.

Whatever he’ll be doing, Morin-Ferguson plans to be doing it in some very familiar territory.

“I haven’t missed many home games,” Morin-Ferguson said Wednesday night. “It’s pretty cool to be able to go there as a player.”

Morin-Ferguson said he chose the Grizzlies over scholarship offers from Montana Western and Carroll College. He also talked with Montana Tech before deciding to take the chance in Missoula.

“I just wanted to be a Grizzly more than anything,” Morin-Ferguson said.

Morin-Ferguson has been a contributor for the Butte High football team for some time, first in the kicking game and then as a receiver/tight end.

In 2017, the Morin-Ferguson was primed for a big-time season, as was evident when he racked up 101 yards and a touchdown receiving in Butte High’s season opener against Kalispell Flathead in Bigfork.

He was also learning the ropes at defensive end, all while handling the kicking and punting duties for the Bulldogs.

Then, in Butte High’s Week 4 win over Bozeman at Naranche Stadium, Morin-Ferguson tore the MCL in his left knee. He never suited up for the Bulldogs again.

“I was planning on coming back in two or three weeks,” Morin-Ferguson said. “But I kept going to the doctor and he kept extending the sentence.”

It was a heartbreaking way for Morin-Ferguson to end a season that had so much promise.

The injury, which came while Morin-Ferguson was playing defense, put an end to all of that.

“Then the injury happened,” Morin-Ferguson said, “and it wasn’t so much fun.”

Morin-Ferguson still had enough of a résumé — to go a long with a 6-foot-2, 210-pound frame — to open some college eyes, and he ended up where he wanted to be all along.

“I’m thankful for that,” Morin-Ferguson said of having the opportunity despite the injury-shortened season.

The injury was also the final nail in Morin-Ferguson’s basketball career at Butte High.

That door closing, however, opened another door.

Morin-Ferguson is now a thriving member of the Butte High swimming team. He started the sport as a way to rehab his knee. His season will end in the state meet.

“We figured swimming would probably be better for the knee than running up and down the court,” said Morin-Ferguson, who quickly qualified for state in the 50-yard freestyle. “It turns out I was pretty good at swimming.”

Ferguson is also close to qualifying in the 100 freestyle, something he hopes to do when the Bulldogs host a meet Saturday at the Butte Family YMCA.

Morin-Ferguson, the son of David Ferguson and Tina Morin, will head to college with the long-term goal of going to law school. He said his undergraduate degree will be business or maybe political science.

He is also looking forward to bringing back some Butte flavor to the Grizzlies.

Washington-Grizzly Stadium has a long line of former Bulldogs who starred for the Grizzlies. Morin-Ferguson is hoping to be the first Butte High Bulldog to letter for the Grizzlies since safety Jake Dallasera, whose last season in Missoula was in 2014.