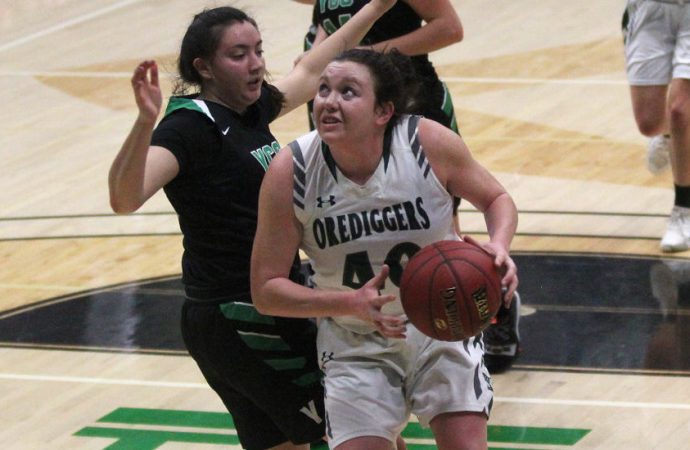 Things could not have looked easier for the Montana Tech women’s basketball team Tuesday night.

The Orediggers dominated in every facet of the game, and Tech beat Yellowstone Christian College 98-37 in front of a small crowd at the HPER Complex. (Stats)

Mesa Williams hit a 3-pointer 16 seconds into the game to give the Orediggers the lead for good. The long ball was the first of 12 made 3-pointers for the Orediggers, who led 32-7 after the first quarter and 60-15 at halftime.

Tech shot 76 percent from the field in the first half — including 7 for 11 from 3-point range.

While the competition was nowhere near what the Orediggers have played and will see the rest of the way, head coach Carly Sanon said she was happy with her team for closing out a difficult stretch on a high note.

“We played four games in five days, so it was just seeing what we had left and really trying to do things right,” Sanon said. “We really talked about boxing out and doing the little things right because we can’t get bad habits when we’re going into a big game a week from today.”

The Orediggers head to Helena next Tuesday to open Frontier Conference play against Carroll College. Tech will hit the road with what is, technically, an eight-game winning streak.

That streak does not count Monday’s exhibition loss at Idaho State of the Big Sky Conference. The 8-1 Orediggers have not lost a game that counts in standings since falling 56-53 at home to the University of Calgary during their Oct. 19 season opener.

Their ensuing streak includes a pair of wins over the College of Idaho, a victory over highly-ranked NAIA Division II Corban University and a victory over William Jessup (California), a national tournament team in March.

Sanon said the difficult schedule was by design.

“There were some good teams that we got to play against, and I think that really helped prepare us for the brutal Frontier Conference,” she said.

Williams scored 20 points to lead five Orediggers in double figures scoring in the win over the Centurions.

Kaylee Zard and Dani Urick each scored 13 points, while Brooke Heggie tossed in 10.

Heggie added seven rebounds as Tech won the battle of the boards 49-21.

All 11 Orediggers who played scored points.

Mollie Peoples tossed in nine points for the Orediggers, who also got six points from Jaden Comings, four from Tjaden Pallister, three from Megan Delaney and Hailey Crawford, and two from Hope Lalau.

Sanon said she is working to blend the newcomers with the returners, and she is seeing solid results.

“I feel really good where we’re at, and I know we’re excited to get into conference play,” the coach said. “I like where we’re at.”