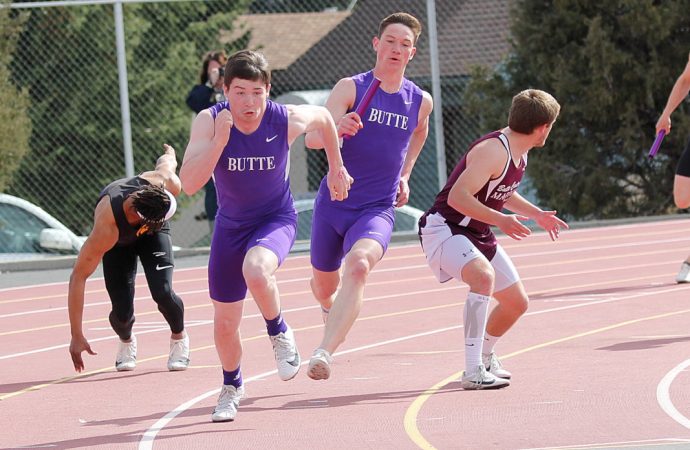 Butte High's Quinn Sullivan takes off as teammate Tommy Mellott delivers the baton for the final leg of the 400-meter relay. Butte Central's Clay Fisher gets ready at a May 3, 2019 meet at the Charlie Merrifield Track. (Butte Sports file photo)

While churches, restaurants and bars will be allowed to resume business, spring sports in Montana will not.

The Montana High School Association Executive Board announced today that the spring season has been wiped out over concerns from the coronavirus.

Montana Gov. Steve Bullock announced plans to ease restrictions on his stay-at-home order today. Schools have the option of reopening on May 7 or continuing distant learning.

The MHSA previously announced that all schools would need to be returned to in-person instruction by May 4 in order for a season to be held.

Beckman pointed out that some school districts have already decided — or are about to decide — to continue with distant learning throughout the remainder of the 2019-20 school year. That means that student-athletes in those districts would not be able to participate in sports.

“So how would you have a realistic season?” Beckman asked. “If they all came back by May 4, we had some plans to what to do. But it didn’t come through.”

Beckman said he has empathy for the students who are missing out on the season.

“I just feel so bad for those seniors,” Beckman said. “They are the ones they are going to be hard on.”

Butte High senior Tommy Mellott, who was in line to be Butte High’s first male athlete to earn 12 varsity letters in his career, was one Beckman mentioned by name. He said he hopes the schools letter athlete like Mellott, even though the season was wiped out.

“It’s such an extenuating thing,” Beckman said. “I hope they award those letters. I would.”

Beckman also mentioned the teams looking for a big season, like the Great Falls High softball team. The Bison would be going for their third straight Class AA state championship.

The MHSA said it is looking forward to resuming high school activities during the 2020-2020 school year. In the meantime, the office will focus on contingency plays for the 2020 fall season and beyond.