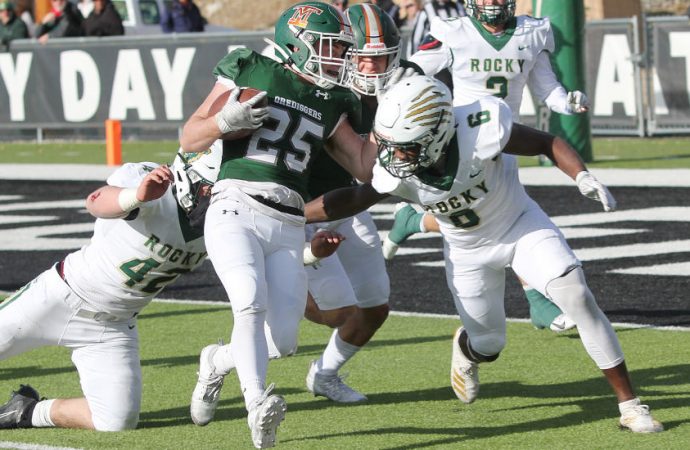 This was not how the Montana Tech Orediggers wanted to end the football season.

The Orediggers turned the ball over five times and racked up 159 yards on 15 penalties — including a handful of unsportsmanlike conduct fouls — Saturday on the Bob Green Field.

That and an inspired Rocky Mountain College team were too much to overcome, and the result was a 38-23 win by the Battlin’ Bears. The game was the season finale for both teams. (Stats)

“We haven’t done anything remotely close to that all year,” Morrell said of the turnovers that sank the Oredigger victory hopes. “We didn’t do a very good job protecting the quarterback, which led to a lot of our turnovers today.

“We had some really tough calls that we had to overcome, and we didn’t overcome that.”

The loss closes the book on a 6-4 campaign that looked like a playoff season before last week’s loss at Carroll College. It will likely send the No. 23 Orediggers out of the top 25 heading into the offseason. 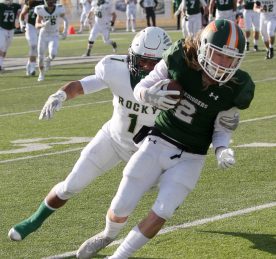 Tech’s Will Hunthausen picks up yardage after the catch. Rocky’s Isaiah Schlegel goes in for the tackle. (Bill Foley photo)

Adam Ames of Rocky shows off the ball after recovering a fumble. (Bill Foley photo)

The day was also one that couldn’t have started out much better for the Orediggers, who took the opening kickoff and marched 75 yards for a touchdown.

That set up a 1-yard gallop by Campbell.

The Bears cut the lead to 10-6 when an interception by Devonte Woods led to a 44-yard Garrett boot.

That was the first of the bad news for the Orediggers.

Prince Johnson recovered a fumble, and Tech was called for an  unsportsmanlike conduct penalty on the play.

One play later, Drew Korf hit Devin Pope for an 11-yard touchdown to put the Bears on top for good at 13-10 with 2 minutes, 10 seconds left in the first quarter

The score stayed there until a holding penalty in the end zone went for a Rocky safety with 6:51 left in the half. The holding, which came on a punt, came a Wyatt Brusven punt pinned the Orediggers at their 1-yard line.

Rocky parlayed the safety into at touchdown, marching 58 yards on six plays. Sam Sparks capped the drive with a 2-yard run. Receiver Lucas Overton took a direct snap on the 2-poitn conversion, and Rocky led 23-10 2ith 2:50 left in the second.

The Bears made it 38-10 with two quick touchdowns late in the third quarter.

Adam Ames recovered a fumble on the next play from scrimmage for the Orediggers, giving Rocky the ball at the Tech 19.

Seven plays later, Victor Ngalamulume busted in from 1 yard out. Korf passed to Chase Truscott for the 2-pont conversion with 1:18 left in the third.

Campbell hit Alec Wooley-Steele for a 57-yard touchdown with 24 seconds left in the third quarter.

The last score came when freshman Kaleb Winterburn found sophomore Kiley Caprara over the middle. The Butte High grad took the ball the final 16 yards for a 40-yard touchdown reception — the first of his career.

With 19 seconds left, however, the score was not nearly enough.

“The game got a little sideways from us in the second quarter, and we couldn’t get the momentum back,” Morrell said. “The guys were ready to go today. We had a great week of practice, and it meant a lot to them today.  Obviously, we’re disappointed in the way it turned out.”

Morrell focused on the positives of the season.

“We’ve got a lot of guys coming back,” the coach said. “We’ll use this year to build off of. It was one of those years where we had a lot of adversity to fight through, and guys learned a lot through the course of the season.”

Rocky closed the season at 3-7 in conference and 4-7 overall.