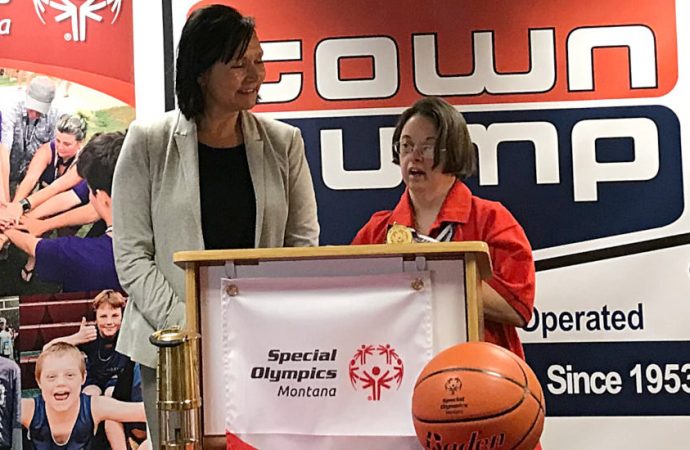 Ruschelle Tyvand shows off some of her many Special Olympics medals as she stands next to Special Olympics Montana President/CEO Rhonda McCarty during a press conference Tuesday morning at the Comfort Inn in Butte. (Bill Foley photo)

Ruschelle Tyvand excitedly shook her fists as she delivered a message Tuesday morning at the Comfort Inn.

Tyvand was talking about the Special Olympics Montana State Basketball Tournament that will be held in multiple venues in Butte and Ramsay Nov. 7-9.

With cameras flashing and rolling, the longtime Special Olympics athlete and global messenger was speaking as part of a kickoff press conference at the Comfort Inn in Butte.

In addition to her training, Tyvand works five days each week at McDonalds, where she is in charge of keeping the dining area clean.

“She is an individual who is engaged in the community,” McCarty said. “She wants to be included. That’s what the Special Olympics is all about.”

While her favorite sport is swimming, Tyvand will be competing in the basketball tournament next month. The tournament will begin a three-year run in the Mining City.

McCarty said the event is a great time for the athletes, their families, volunteers and spectators.

“We will have champions and fans from all across Montana,” McCarty said. “I promise it will be a week to remember.”

Members of law enforcement and a handful of Special Olympians escorted the Special Olympics Flame of Hope into the press conference.

Even more Special Olympians were there to watch, listen and support.

McCarty praised the people of Butte for stepping up to volunteer to run the event. More volunteers, however, are still needed. It will take some 500 volunteers host a tournament so big.

That includes anything from referees to scorekeepers to lunch attendants.

“We’d love to see more people get involved,” said Jamie Wood, vice president of sports for Special Olympics Montana. “This place has been great, but if we can get 500 more it would be even better.”

Volunteers can sign up at somt.org. Those wishing to volunteer as a game official can also do so by contacting Ed Heard at 498-3842.

Heard said experience is not necessary to officiate, adding he will pair inexperienced referees with officials who are experienced. He is just looking for people who are familiar with basketball.

Tournament Co-Director Paul Babb also encouraged people to attend the games, either as a volunteer or a spectator.

“No. 1, please volunteer. You’ll get more out of volunteering than you’ll ever know,” Babb said. “No. 2, if you can’t volunteer, come to the games, bring your family and support the tournament.”

McCarty and Wood thanked the many sponsors for the tournament, which will be held in Butte for the first time since 2010. Key sponsors include Town Pump, NorthWestern Energy, Transystems and the Butte-Silver Bow TBID.

“I can’t say enough about the people of Butte,” Wood said. “They really come together to support the tournament. We are really impressed and appreciative.”