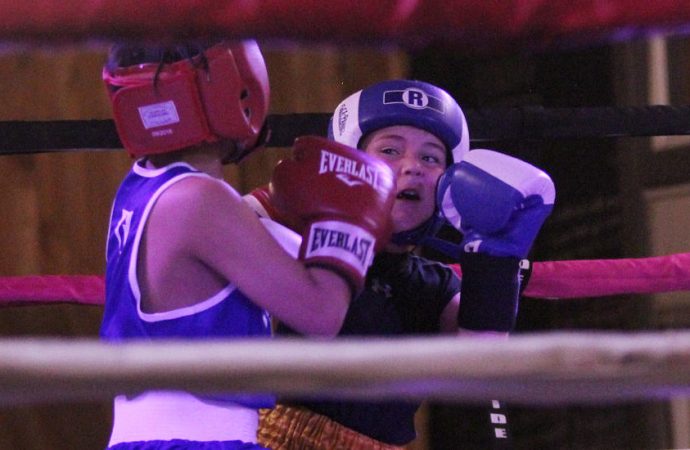 Amateur boxing returned to Butte for a show Saturday night and the whole 20-bout card was a knockout.

A packed house of about 200 persons squeezed into the ring room at the Utah Street Montana Golden Gloves boxing gym and got to witness a good fight every time. The matchmaker might have been the MVP.

“I loved it,” exuded local boxing enthusiast Tom Garland, who helped with promoting the card and is a former amateur  boxer himself. “It was fantastic. It is so nice to have amateur boxing back in Butte.

“It was a great turnout for the first amateur boxing in Butte in seven years. We appreciate the coaches traveling from all over the state in this terrible weather. There will be more (Butte boxing cards).”

Garland, whose 10-year-old son, Chase, made his ring debut on the card, said the last all-amateur fight card he attended in Butte was one he was on in 1999.

Butte had two contestants on the Saturday night card in 10-year-old Chase Garland and 15-year-old Rheanna Brush. Both came up a little short on the judges’ cards, but accorded themselves quite well.

“This was amazing,” said an encouraged Leigh-Ann Whitworth, card promoter and owner of the gym. “We had a ton of help. The community support was great.” 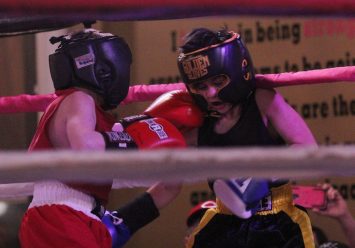 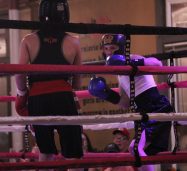 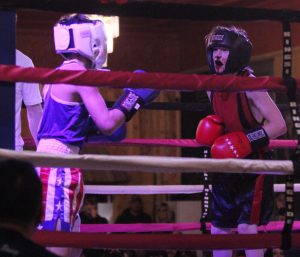 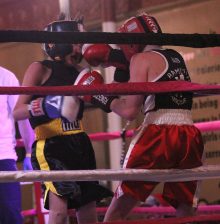 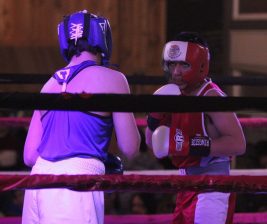 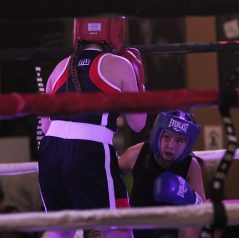 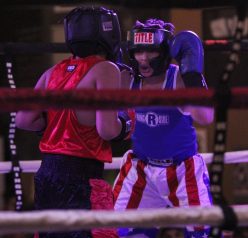 The Butte amateur club is only three-strong in participants, currently, but Whitworth is looking to grow the membership. Having a card in Butte should be a step in that direction and the endeavor is backed by clubs in other Montana locales.

“We’ve been traveling around the state to other (boxing) shows,” Whitworth said. “We’ve been meeting. Boxing is a family. I said at a meeting I wanted to do a show in Butte and Gary Navarro of Helena said, at the last meeting, that we could do one on February 23 (open calendar spot). They said ‘let’s do it.’ We have several fight clubs in Butte, but only three in our amateur club and we’re always looking for more.”

Young Chase Garland gave up some early points to Kyler Hernandez of Hays in their 119-pound limit bout and lost the first round. The Butte boy, though, showed a strong left hand in the second round, but was beaten to the punch by the more experienced fighter. Still, Garland hung in and landed a couple good lefts early in the third. Hernandez had a longer reach and used his right hand to score from the outer range, and came away with the decision win.

“I need definitely to try harder,” Chase Garland said after the fights and while proudly wearing his second-place medal, his warrior’s prize, draped from his neck. “I need to move a little bit more.”

The youngster said he did not feel nervous and simply ignored the large crowd.

“I am so proud of him, he did awesome,” Tom Garland said about his son. “I can’t wait until we get kids his size for him to work with here. He’d never even sparred, but he got in the ring tonight and gave it his all. I was really impressed with him tonight.”

Brush’s bout was one of four for female combatants on the card. Brush, a lefty, was a little bit hesitant on the trigger and absorbed a couple of shots from opponent Zandrea Krummel in the first round. Brush bounced back in the second round and landed a hard right. She shortened her throws and tightened her range. The resulting accuracy mattered and she pulled closer in points. She switched in the third round, firing off accurate, straight right hands to score on Krummel. However, she wasn’t able to make up the ground she lost early and the Helena 119-pounder came away with a close decision.

Only one of the 20 bouts failed to go the distance. A war of 153-pounders saw Billings Elite club teammates Raven Walker and Keaton Souza slug it out until Walker dished out his second eight-count. They exchanged evenly in the first round. However, the taller Walker caught Souza with a solid right hand to the head to cause an eight-count in the second round. Souza kept his feet, but was slowed. In the third round, Walker unleashed a left-right combination to Souza’s head to bring about another eight-count, after which the referee waved off the rest of the match.

The main event to end the night was a thumper between 137-pounders Daniel Gonzales of Billings’ Elite club and Vance Sellars of the Blackfoot Nation team headquartered in Browning. They lambasted each other with resounding  blows in the first round that seemed to take either off his feet at any contact. However, neithered fell. Gonzalez worked inside Sellars’ reach in the second and unleashed some fury on the body, but wasn’t able to connect over the top on throws at the face in combos. Still, he was scoring. Sellars showed a quickness in his punches despite loosening them from afar with his superior reach. Both hit hard. The third round seemed an encore as both fighters uncorked everything they had left and banged on bodies and heads. Sellars’ defensive set from which he was able to uncoil and score hard shots brought him a narrow decision win.

60 pounds — Sheldon Mieneke (Blackfoot Nation, Browning) dec. Nathan Duggan (Hamilton). The noticeably taller Mieneke fired off a stiff left hab in front of a sharp right hand and worked it to build up points He forced an eight-count in the first round with a two-handed attack. Duggan fought back in the second round, but Mieneke landed at will. He landed two big shots early on Duggan, who survived the onslaught, but lost the decision.

72 pounds — Dontae Velarde (H-Town, Helena) dec. Jesus Villeral (Barrio, Billings). Velarde built a slight edge  in the first round with straight rights and a solid left. He scored in an otherwise even second round with a spin move and counter that caught Villarel flush on the jaw. An even third round capped a good fight.

77 pounds — Morgan Huggs (Billings Elite) dec. Alec Grant (Hays) — They attacked with flurries from the get-go in the first round, then traded punches toe-to-toe in the second. They kept up the exhausting pace in the third round, and Huggs was awarded the close decision.

90 pounds — Evan Bennett (Hamilton) dec. Cyril Plain Bull (Barrio, Billings) — Plain Bull belted Bennett with a big right hand early and looked to gain the advantage, but Bennett weathered the storm. Bennett fought his way back in the second round and was rallying at the bell. Bennett established himself as the aggressor in the third as Plain Bull might’ve tired. It worked for Bennett as he gained the decision.

87 pounds — Jayce Herron (H-Town, Helena) dec. Johnny Vasquez (Billings Elite). Herron was physically stronger and bulled his way to the early advantage, controlling the pace. He bashed a good right had off Vasquez’s head in the second round and scored again moments later with another right. Vasquez likely threw and landed more punches, but Herron’s were harder and louder. They slugged it out through the third round.

87 pounds — Johanna Martinez (Billings Elite) dec. Lilli Erickson (Helena Iron House) — Martinez had a good start with a series of landings and then hit harder with bigger shots in the second round. She worked in structure with a pound to the body, then a hammer to the head and had a comfortable lead through two rounds. Erickson rallied in the third with a sharp left hand to the head, but Martinez saved her win with a series of scoring punches at the end of the fight.

110 pounds — Breean Cochran (Hays) dec. Anaya Grant (Hays) — The teammates knew each other well and the first two rounds seemed mostly a sparring section as their defenses canceled each’s offenses. The smaller Grant landed two good rights in the third round, but Cochran had built up enough points to come away with the decision.

100 pounds — Anthony Espino (H-Town, Helena) dec. Santino Martinez (Billings Elite). They fought in close quarters in the first round, then went phone-booth style in the second with toe-to-toe trades of punches. Espino’s offerings were more accurate and he won the decision.

124 pounds — Kellen Norman (Polson) dec. Jance Eagle Feathers (Blackfoot Nation, Browning) — This was one of the best fights of a night of good fights. An action-packed first round set the tone and then Norman gained a slight edge in the second when the brawl resumed. It was a really good round of boxing. Norman, though, took the fight over in the third round as he was able to hone in on Eagle Feathers’ defensive lapses. A solid right hand to Eagle Feathers’ nose as the bell rang likely clinched the win for Norman.

140 pounds — David Ponce (Hamilton) dec. Dante Vallance (Iron House, Helena) — Ponce gained a slight advantage in a well-boxed first round and then hung onto the edge in a rousing second round of competition. Ponce seemed a little better conditioned, fresher and punched his way to the third-round advantage to clinch the win.

77 pounds — Wendell Haackanson (Hays) dec. Tanner Blair (H-Town, Helena) — Haackanson built up an early lead with quick hands that found their mark. They fell into a round of wild swinging in the second round before their corners got them back on track for the third round. Blair chased Haackanson around the ring, but the lead Haackanson had constructed held up for the win.

117 pounds — Braydon Adams (H-Town, Helena) dec Logan Avila (Iron House, Helena) — It was one of the few matches on the card that started out slow. The fighters were cautious, probably familiar foes. Adams nabbed a slight edge in the second round, then unleashed a good right-left combo to establish control of the fight in the third. He fired away with both hands as the fight wound down and iced the victory.

100 pounds — Kaylie Chartier (Billings Elite) dec. Diana Old Elk (Hays) — Chartier might’ve named herself the most accomplished boxer on the card with her display. She showed exceptionally fast hands as she peppered Old Elk with short, accurate straight right hands in the first round. The combinations she wielded caused Old Elk to take a standing eight-count in the second round and then Chartier just plain dazzled with her hand speed as she punched out her triumph in the third round.

88 pounds — Chayzin Bird (Blackfeet Nation, Browning) dec. Brandon Demers (H-Town, Helena) — Demers threw straight, accurate punches to open the fight, but Demers countered with swarms. Demers was more aggressive in the second round, though Bird still had the advantage in punches thrown. He continued to unleash. A good even third round closed the fight and Bird eked out the decision.

68 pounds — Gaige Kelly (H-Town, Helena) dec. Wyatt Mieneke (Blackfeet Nation, Browning) — Kelly forced the action in the first round while gaining a slight edge on the cards. It was a close, even fight all through the second round. Kelly faded a little in the third while Mieneke made strides and closed the gap even more. Little could separate the two and Kelly was the winner by a thin margin.

188 pounds — Richard Hoops (Nakota, Fort Belknap) dec. Clifton Bullshoe (Blackfeet Nation, Browning) — This was another really good fight. Bullshoe was the aggressor in the first round as he spiked Hoops with a good left jab he hid a solid right hand behind. So, Bullshoe had the first round. The rest between rounds did Hoops some good and he held his own with Bullshoe in an even second round. Hoops began landing his left hand. Then, in the third, Hoops rallied. His left hand kept getting through on Bullshoe and a flurry of punches at the end of the round and match turned the judges’ favors toward Hoops. 1 comment