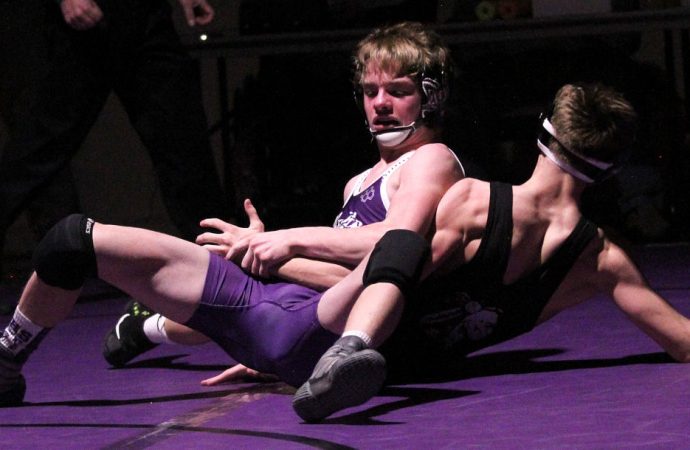 Butte High’s promising start to the prep wrestling season plays on a bigger stage this weekend with the Bulldogs’ return to the Butte Civic Center.

The 32nd annual Mining City Duals Jim Street Classic tournament will go Friday and Saturday in the arena with all bouts being held in the same room across five new mats. The tourney began in the Civic Center and was continued there until Butte High’s opening of a new gym in the early 1990s. From then through last year, the tournament was held in the two Butte High gyms.

The tourney is co-named for the Bulldog coach who guided the program to 15 state Class AA team championships in the 1980s and 90s, including a state record 13 in a row, 1980-92.

Action is to start at 9 a.m. on Friday and 10 a.m. on Saturday. The finals are to be held Saturday evening.

The Butte Wrestling Club is running the tournament and Cory Johnston, fifth-year head coach of the Bulldogs, said several amenities the change in address allows, will be shown for the fans.

Johnston said the move does not mean the gyms were a bad location, or that Butte High staff did a bad job of running the meet. This is simply something new to try, he said.

“We have a great working relationship with the Butte Wrestling Club,” Johnston said Wednesday night during a KBOW Radio “Overtime” segment. “There are about 40 (club members) setting up mats at the Civic Center, right now.

“I think the tournament will be more fan friendly.”

Proceeds will help the club send Butte wrestlers to camps, the coach said. Results will be up to date through the Trackwrestling site, he said, and information boards hanging in the arena will post tournament progress.

“We want to make it a way bigger tournament and we’ve had teams from out of state calling to get in,” Johnston said. “But, this year we just wanted to feel out how it is going to be (in the Civic Center) and then grow.”

The defending champion is Great Falls High, which is also off to a good start on the wrestling season, and all 15 Class AA schools are among the 24 team entries. Last year’s finals were an all-AA affair as Great Falls High defeated Billings Senior for the title and Bozeman topped Flathead of Kalispell for third place. The state tournament a couple months later saw Bozeman emerge as the state AA champion with Great Falls High second and Senior third.

Butte High is 4-1 in dual meets this young season with wins over Kalispell Glacier, Helena Capital, Helena High and Missoula Big Sky, and a loss to Flathead. Great Falls High’s quick good start includes team championships in two tournaments last weekend, winning in Havre with its varsity and in Cascade with its backup unit.

Butte High will have two teams in this year’s tourney. The Bulldogs’ first team is one of the six pool top seeds along with Bozeman, Great Falls High, Billings Senior, Billings West and Flathead.

The pool rivals of the No. 1 Bulldogs are Helena High, Missoula Sentinel and Class A contender Frenchtown. The second Bulldogs are in Billings West’s pool along with Capital and Missoula Hellgate.

Johnston said team depth this year allows for him to enter two teams in the Butte tourney, with only three vacant weight classes on one squad and none on the first, and a third team will be competing at a varsity tourney in Whitehall, with a couple of vacant weight classes. Injuries have caused some of the early vacancies, inexperience some others.

“I’m not as stressed about the moves (of wrestlers through weight classes) because I like where our kids are, right now,” the coach said. “They’re all going to be there in the end.”

Many of the Bulldogs are still adjusting to the sport after the lengthy football season that saw them advance to the state Class AA championship game. Johnston said the success on the football field, however, was a plus for his program as well as for the football team, the school in general and the community, overall.

“We’re looking forward to getting healthy,” he said. “We still have a few kids banged up, but this is a good group. I’m anxious to see how they wand their story written, what will be their legacy as a group.”

He said the competitiveness, even eternally, has been an early strength the Bulldogs have shown.

“They all wanted to wrestle in The Mining City Duals and there were only a few spots available,” he said, “so, it was fierce in the wrestling room this week. They’re super competitive with each other.”

Senior Quinn Sullivan will be missing from the lineup after aggravating a football injury last week. Johnston said the injury isn’t as bad as first feared the four-year regular should be back on the mats soon. Senior Scout Allen, held out last weekend for precautionary reasons after an injury scare in Thursday night’s practice, is back in the lineup. Junior football lineman D.J. Jackson, a new Bulldog after placing at state for Missoula Big Sky last year, is still healing an injury and being withheld this weekend.

Kameron Moreno was a state champion at 205 last year and his twin brother placed at state two years ago. Gransbery is a returning state placee.

The first unit’s pool matches Friday are scheduled for 10 a.m. versus Helena High, 1:45 p.m. against Sentinel and 4:15 p.m. with Frenchtown.

Some returning state place-winners expected to be seen in the tourney include three-time state champions Jake Bibler of Frenchtown, John Mears of Belgrade and Leif Schroeder of Bozeman. Schroeder is Iowa-bound for college wrestling next year. Lewistown’s Cooper Birdwell is a two-time state champion.

A main attraction of the tournament, Johnston said, is the level of competition wrestlers can experience in a short amount of time, which should be beneficial to their developments.

“In other (non-dual) tournaments, you lose two bouts and you’re out,” he said. “You go sit down somewhere. Here, you can lose five matches and have to keep wrestling. So you better pick it up or keep getting beat.”

4:15 — Great Falls High vs. Polson, West vs. Hellgate, Senior vs. Columbia Falls, Frenchtown vs. Sentinel, Capital vs. Butte High No. 2.