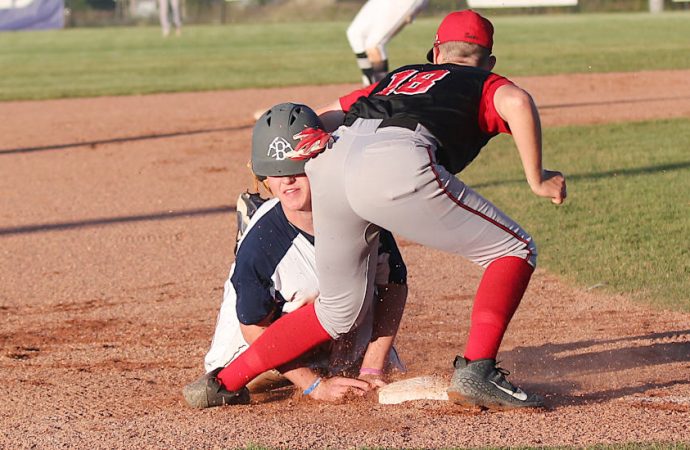 Butte Miners head coach Jeff LeProwse talked worryingly a little bit about “having to do more than just think” to win a ballgame.

He was right, of course. The action, the application has to be in effect, too. Bozeman had just proven that in an example that benefitted LeProwse and the Miners. Butte swept the Bucks 13-2 and 9-8 in a Southern A Conference American Legion baseball doubleheader at 3 Legends Stadium’s Miners Field Friday night.

The nightcap win was a product of, perhaps, some overthinking on Bozeman’s part. The Bucks intentionally walked Miners 3-4 hitters Ryan Wahl and Aidan Lee to load the bases with two out in the bottom of the seventh inning, the last of the twin bill. Kenley Leary was already on base via an error.

Eric Hart then strode the plate. He’d already touched the Bucks for three hits in the game, but Bozeman still picked him out as the one to be pitched to – bases loaded and score tied at 8-all in the bottom of the seventh.

The first pitch was high and outside, and the next landed inside in the dirt for ball two. Another high-and-outside toss the hitter a 3-0 count advantage. Strike one was delivered directly down the middle of the plate. Hart laid off, the count going to 3-1. 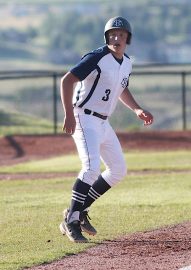 The fifth pitch of the plate appearance was well outside, sending the catcher into a lurch to snare it. Leary trotted home with the winning run while Hart trekked to first base and Wahl and Lee each moved up a bag.

It was game over, end of the doubleheader. The win was Butte’s 18th in its last 20 games and improved the Miners’ records to 21-9 overall and 18-4 in conference. They will go to Florence on Sunday to play the Bitterroot Bucs in a non-conference twin bill, then return home for a Tuesday night showdown with league leader Belgrade.

“It was a win, but the second game was ugly,” LeProwse said of the Friday night contests, played before about as good a crowd as can be allowed in the ballpark in these pandemic times. “I am not happy with that. We gave them their first five runs on four or five errors. Their home run (a towering blast over left field by Corbin Holzer) scored their only two earned runs. We have to play better on defense or we’re not going to get very far (in postseason).

“I think we were kind of flat after the first game. At district (tournament), we’re going to have to four games to get to State and one flat game can prevent us from doing that.”

Butte’s six errors in the nightcap came on the heels of a one-error, pretty well-played overall game.

“I thought Rylan (Richards) gave us great pitching in the second game and it was travesty that we couldn’t get him the win,” LeProwse said. “We didn’t back him up. Wahl got hit a little bit in the first game but he’s the kind of guy who battles that. We got him some runs and some defense. It was a closer game than it seemed.”

Reece Cox picked up the pitching win in the second game, coming in after Richards reached his pitch quota.

“We have to stay focused the whole game, not just in the sixth and seventh innings,” LeProwse said. “I’m being too negative. I really am proud of these kids. We’ve had good pitching and we’ve hit the ball pretty well. We’ve played super great defense at times. Their confidence is good and they don’t get down on themselves much. All of the kids do a good job of picking each other up.

“I’m proud of them. I just expect better.”

The game ended in the middle of the fifth inning on the 10-run difference rule. Bozeman scored its two runs in the first two innings. The Bucks led 1-0 midway through the first after Holzer hammered a two-out double off the left-field wall and rode home on a single by Gannon McGarrah.

Butte grabbed a 2-1 edge in its first at-bats. Walks to the first three batters, Richards, Egan Lester and Wahl, loaded the bases. Lee singled in two runs with a whack to right.

Bozeman tied the score in the top of the second when Kaden Thomson tripled to deep center, then trotted home on a sacrifice fly by Andrew Western.

The Miners took the lead for good with two runs in the third inning, then broke the game open with a nine-run eruption in the fourth frame. Wahl put Butte ahead by scoring from third base on an error after singling his way on base, and stealing second and third. Lee had walked and took off for second base. Bozeman countered the move, though to be designed to free Wahl to run home, by throwing to third in an attempt to pick Wahl off the bag. However, the throw was bad and Wahl scored. Lee stole third and scored on another Bozeman throwing error drawn by Hart stealing second.

In the fourth, Wahl gained base on a one-out walk and then Lee walked. The Miners chained singles by Hart, Kenley Leary and Cox, driving in two runs. Kian O’Neill knocked in two more with a double to center field nearly caught by a diving Michael Armstrong. Walks to Evan Starr, Richards and Egan Lester forced O’Neill in with a run and kept the bags full. Wahl cleared them with a triple into the right-center gap.

Wahl struck out six and walked only one in pitching the complete-game win.

Bozeman again took a 1-0 lead in the first inning, this time without a hit. Holzer walked with one out, stole second base and then ran all the way home from second on a passed ball. Butte grabbed a 2-1 edge with two runs in the bottom of the second.  With two outs, O’Neill’s smash skipped past the Bozeman third baseman and O’Neill was safe on first base. He stole second base and continued to third on the throwing error to the bag. Eyston Lakkala singled him in, then, after an errant pickoff throw, raced home on a base hit by Leary.

The Bucks tied the score in the third as Armstrong walked, then got to third base when Butte fielders muffed Nate Pailthorpe’s sacrifice, and came home on an error.  Daniel Beers doubled in the fourth and advanced home on another Butte error, one of six the Miners committed in the game. The Bucks then led 3-2.

Butte went ahead 6-3 with four runs in the last of the fifth. Hart singled with one out and swiped second base. Zach Tierney singled to left and Richards ran for him. Richards stole second, drawing an errant throw that let Hart go home and tie the score. Richards wound up at third base on the play. Cox drew a walk and also stole second base. O’Neill singled both runners home with a bouncer up the middle. He scored on a wild pitch after advanced by Lakkala with an infield hit.

The Bucks rebounded to knot the score at 6-all with three runs in the top of the sixth. Lane Harrison was hit by a pitch and Thomson walked. Both advanced on steals and scored on errors. Two more walks followed and Bozeman parlayed them into a run, using a rundown to beat Butte’s defense to the plate. Daryn Shepherd scored from third while Armstrong sacrificed himself on the basepath between first and second.

Butte took an 8-6 edge with two runs in the bottom of the sixth. Lee was safe on a fielder’s choice and Hart singled. They advanced a bag each on late throws to the base off of Hart’s hit. Richards lofted a sacrifice fly that tallied Lee. Hart scored on a wild pitch.

One more time, the Bucks tied the score and did it in the top of the seventh with a big boom. Pailthorpe led off the inning with a base hit to center field. Holzer then chased the comet with a shot rising over the left-field fence for a two-run homer.

However, Hart’s walkoff off walk in the bottom of the frame thwarted the comeback.

Richards gave up just one hit in his 5 1/3-inning stint. He struck out eight batters.