There are some good old-fashioned mining skills on display in the shadow of Montana Tech, as the first day of the International Mining Competition concluded Friday.

The “A” co-ed team from the Mackay School of Earth Sciences at the University of Nevada-Reno edged the “Titanium” co-ed team from the South Dakota School of Mines and Technology to take top honors in the co-ed division of the competition being held this weekend at a custom-built site just west of Montana Tech.

While the co-ed team from the Camborne School of Mines in Camborn, Cornwall, came in third, Montana Tech’s Copper and Green co-ed teams finished in fourth and fifth.

Also held Friday was the Alumni competition, which was won by the Western Australia School of Mines. The Mackay men’s alumni team was second, while a Montana Tech co-ed alumni team tied with the Mackay women’s alumni squad for third.

The Men’s and Women’s team competitions are slated for Saturday, while the individual events will be held Sunday. The public is welcome at the free event, which is slated to resume at 8 a.m. Saturday.

The finish in the co-ed race was a close one, as Mackay scored 26 to SDSMT’s 28. Teams are awarded one point for first place, two for second, and so on, so the lowest score wins. Camborn had 31, while Tech’s teams had 32 and 36 points.

Mackay had wins in the Hand Steel and Survey events, while Tech’s Copper team won the Swede Saw and Jackleg Drill competitions. The Montana Tech Green team was edged out of a win in the survey by less than an inch, as Mackay was 0.48 feet from the target and Tech was 0.50 feet away. Brazil was third in the survey at 1.84 feet off.

Montana Tech’s Alumni team won the Mucking competition and was second in both the Swede Saw and Track Stand competitions. 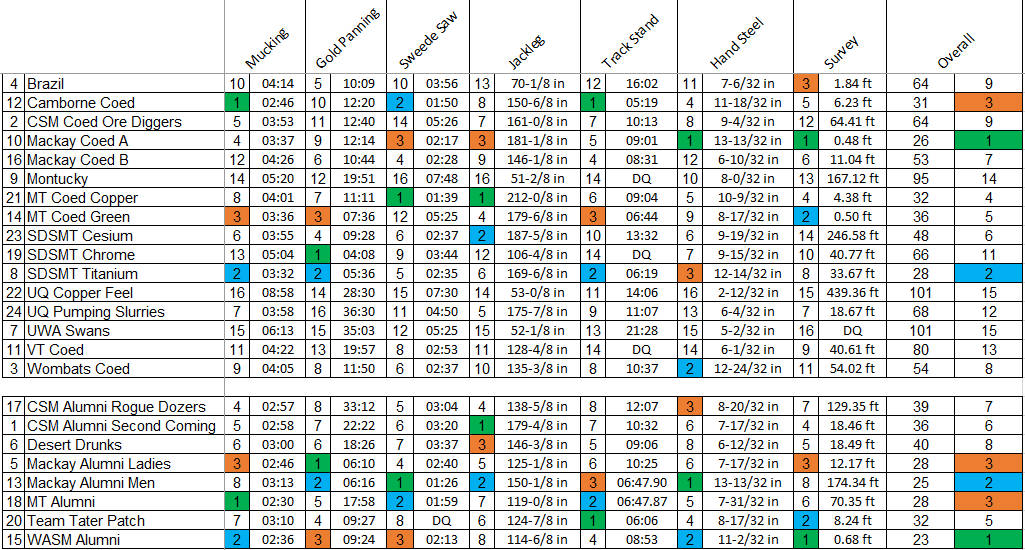